Robert Charles
|
Posted: Feb 07, 2017 2:57 PM
Share   Tweet
The opinions expressed by columnists are their own and do not necessarily represent the views of Townhall.com. 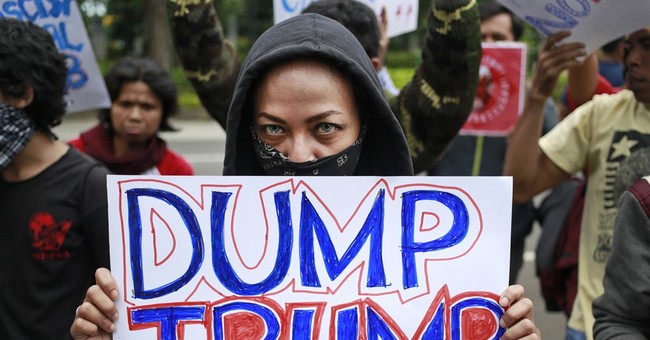 Mob rule and street violence are un-American.  Somehow, the left does not see it that way.  Berkley burns, hooded figures beat innocents, buildings are vandalized, and a speaker is run out of town.  Senate Democrats watch mounting political violence – and do nothing.

Worse, they demean a President with whom they disagree, boycott his nominees, cry on camera with purported victims, and dismiss a remarkable Supreme Court nominee.  Senator Tim Kaine (D-VA) has the gall to tell Americans to “fight in the streets” against Trump.  What madness is this?  What planet are these folks from?

What we are witnessing is – apparently – the collapse of all reason, or a party struggling with the concept of wilderness, not very gracefully.  While entertaining, it must stop.  For the sake of everyone.  And now the point:  Part of this will stop – at the Supreme Court, very shortly.

To review, President Trump issued an order temporarily halting migration to the United States from countries and populations roiled by terror and instability.  He did so to protect all Americans.  A similar order was issued by President Carter for Iran in 1979.  As if on cue, Federal Judge James Robart issued an overly broad, nationwide restraining order – blocking the President’s anti-terror measure.  That order is up for review by the US Court of Appeals, 9th Circuit.

Long ago, I clerked for that same US Court of Appeals.  What should we expect?  We have only people, process and law to guide us.  But that’s enough.  A three-judge appellate panel will hear the appeal.  Judges are William Canby, Michelle Friedland, and Richard Clifton.  Canby was on the bench when I clerked in the 1980s.  He is smart, focused, but what most would call a judicial activist.  He was brother-in-law to President Carter’s Vice President, Walter Mondale, and nominated by Carter.

Friedland is an Obama appointee.  She comes from Berkley, clerked for Reagan-appointee Sandra Day O’Connor, but another activist.  Wonder what she thought as her Berkley burned?  At times smug, she wrote in one opinion: “No official with an IQ higher than room temperature in Alaska could claim that he or she did not know that the conduct at the center of this case violated both state and federal law.”  Expect her to vote for the restraining order.

Clifton, appointed by President George W. Bush, is the wildcard, not that it matters.  A two-one decision preserves the restraining order. Like Canby, Clifton is on senior status, so a reduced docket.  He is close to both Democrats and Republicans, which could mean anything – or nothing.  He is unlikely to sway the other two, and might be swayed.

While it is unfair to suggest that politics will interfere with an appellate review, the panel tips judicial activist, which means they are not sold on strict construction, deference to Article II, or national security prerogatives of an Executive.  Nor are they likely to rule on the law’s plain meaning or simple text.

Expect this panel to uphold Robart’s nationwide restraining order, tenuous as the ruling will be.   Then enter the US Supreme Court, evenly split.  Law and judges abhor uncertainty, and the Nation is at risk with it, so expect a swift appeal to the High Court, and likely a swift decision.  The law should upheld, restraining order set aside, and here is why.

Two issues predominate.  Opponents point to the First Amendment’s “no establishment” of religion clause, which bars Federal favoritism toward one religion.  The argument is that this order, as applied to Americans, somehow favors one religion.  That is not in the text, and so hard to legally defend.  The point will still be raised, but seems inapt.

Opponents will also argue context matters.  Remarks on religion during the campaign, they will say, should be considered.  Perhaps, but that cannot obviate the law’s larger intent.  The media have tried to submerge the anti-terror, public safety, and national security elements of this law – those elements will not be ignored by the US Supreme Court.  The media pushes emotional buttons to foster legal misinterpretation; that will not work at the High Court.

Funny, a gaggle of “national security experts” – all Clinton supporters – wrote to the Court saying they do not think the president is right.  They think his order might undermine national security.  These Democrat activists were actually behind the policies necessitating the order.

One declared “there is a special place in hell” for women who did not vote for Clinton.  Guess the place will be crowded.  Based on her letter, she did not mean the seven terror-riven countries from which President Trump hopes to regulate outward flows to the United States.  In short, the “expert” letter means nothing.

Finally, they argue Trump’s law violates the “equal protection” clause.  While complex, the balance of equities – including national security, historical and legal precedent, constitutional prerogative, and material facts on terrorism – tips hard for the White House.  Tailoring may be needed, but the core order should be found sound.

Net-net, expect exchanges ending at the High Court.  Do not expect the Supreme Court to eviscerate executive power, re-write Article II, or otherwise shock the Nation by disallowing a president from protecting America.  If that occurred, mob rule wins, Democrat Senatorial intimidation continues, and the activist bench has infiltrated the High Court.  If we end up there, heaven help us – heaven and Neil Gorsuch.  Let’s hope level heads prevail; and they should.