Robert Charles
|
Posted: Oct 09, 2016 6:13 PM
Share   Tweet
The opinions expressed by columnists are their own and do not necessarily represent the views of Townhall.com. 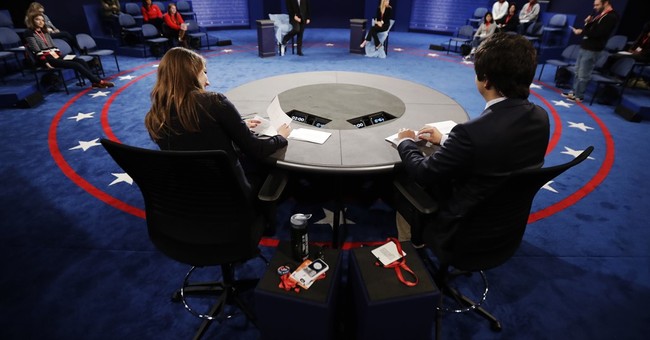 The debates – and remainder of the campaign – are defined by three players and three major factors.  The three players are the two candidates and the voters, as a whole.  The three factors are whether a candidate will do what they say they will do (trust), whether the candidate aims to do something the majority of Americans want (positions taken), and the competence of the trusted candidate to effectuate the positions taken.

Look at Hillary first, and understand her game.  Her trust level is among the lowest in modern history for a national figure, and the lowest for any candidate running for president on record.  Her positions (in aggregate) are actually favored by the majority of her base, but not by the majority of Americans. Essentially, those who trust her are few and those who want her positions, versus her status as a woman or her being non-Trump, are not at numerous as those who favor, at least in the abstract, the Trump positions.  Put differently, those who vote for her on positions, are doing so because they feel her positions will penalize those from whom they wish to extract punishment (e.g. top income earners, law enforcement, social conservatives, political enemies) or they feel a personal benefit will flow to them from voting for her (e.g. reduced college costs, sustained welfare, minimum wage).

Somewhat ironically, her actions on Benghazi, the email server, mishandling classified information, and showing poor judgment do not appear to have undermined her claim to “competence” among a majority of Americans, especially in swing states.  Her perceived competence is grounded in and corroborated by her proven experience, for a slim majority of the nation.  Realistically then, winning for her involves focusing on restoring trust in her and subtly realigning herself with the majority of Americans, who actually DO want to “make America great again.”  That is her challenge.  At present, since she continues to project competence to her base and a slim majority, her issues are trust and her positions.

Trump’s problem is the reverse.  In game theory, his recent statements about women notwithstanding, he actually wins on two out of the three major factors in play.  He is believed by most Americans, even those who do not like him, to be likely to “do what he says he will do,” whether that involves securing America or placing candidates of a certain type on the US Supreme Court, whether that involves rolling back regulations on small business, vetting refugees or creating a solution to the illegal immigration problem.

Moreover, on factor two, he is also viewed as credible.  Namely the positions he takes are polling high among a majority of Americans.  Minus his quixotic statements, stinging sarcasm and apparent default to generalities, a majority align in the abstract with his overall sentiments, seeking restored national reputation and sense of cohesion, reduced social censorship and government controls.  But he has a deep problem.  Trump is not viewed as competent, and seems intent on perpetuating doubt about his competence, to serve as a President of the United States.  Since this is seminal, he must establish confidence in his competence.

Here is where game theory comes in.  Clinton has, at least intuitively, figured all this out.  She sees that he is trusted more than she is, has a slim majority on positions over her leftward drift.  She knows she must undermine faith in his competence.  This is his Achilles heel.   Trump has begun to understand her game.  The issue for him is no longer whether he will do what he says (trust) or his basic positions, which are essentially populist and align with the American mood.  It is his competence to serve in high office.

That means, beyond projecting presidential persona and calm, depth in unexpected areas (such as ballistic missile defense or economic policy), Trump must cause Clinton to acknowledge – using common sense, mutually held views, sophistication or surprise – that he has the requisite competence to be the President.  This may be implicit, not explicit, but must happen.  He must also command detail, demonstrate sound judgment, know some history, and recognize geostrategic context in ways that show competence.  If Trump produces a debate in which he is viewed fully competent, Clinton loses the third wedge, could lose the election.  On the flip side, she must project trustworthiness and subtly align herself with his pitch to “make America great again.”

This will be a tough set of exchanges, but if the two candidates are thinking strategically, it will also be more focused than most imagine.  He must trap her into buy-in for his competence.  She has a steeper grade, having to show she is trustworthy and that her positions are tenable.  The game is afoot.  Viewers should see it clearly.  And may the truth shake out, landing loudly, as it did in the Pence-Kaine debate.