Trump, and the Draw of Simplicity

Robert Charles
|
Posted: Mar 08, 2016 12:01 AM
Share   Tweet
The opinions expressed by columnists are their own and do not necessarily represent the views of Townhall.com. 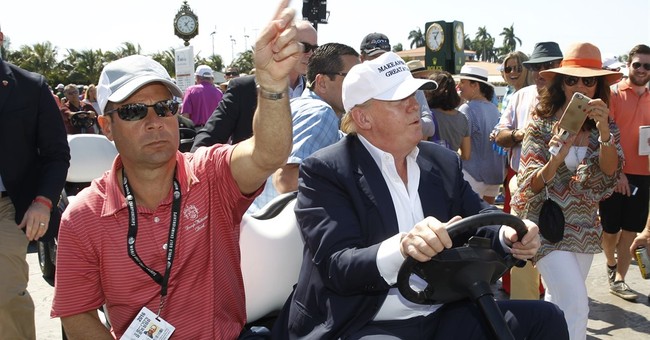 Making the forest safe from bears.  That was our topic, as a bunch of Boy Scout fathers sat in a circle around a late night campfire.  Kids were asleep.  We could discuss issues of the world, now.  There had been a lot of bear sightings lately.  Made you edgy.  The topic percolated up and poured forth, like hot coffee on a cold morning.  Everybody had something to say.

If Donald Trump’s wall and enthralling methods had been in season, we would have discussed them.  But this was long ago.  Conversation turned to big ideas, ingenious schemes, fixing the world, making the forest safe from bears.  We were not far along when one brave father threw out an idea.  It was Trump-like, novel if not a flash of genius.  If not a wall around the country, his ingenious idea was almost as compelling.  “You know, we could protect this whole campsite, end the worry about trouble bears, if we used common sense.”

Huh? “Yeah, think about it, why do we have to put up with these marauding black bears … when we could keep them at bay with technology.”  We were all ears.  We were on public land, so could not carry firearms.  Since we were remote, we could not retreat to our cars.  We knew bears moving at night were foraging.  If they had cubs things got dicey fast.

There had been a lot of bear reports lately, more than normal.  We were tired of thinking about bears, tired of thinking we had bumped into a bear when it was squirrel.  We were ready to be done with bears.  In fact, some of us knew a lot about bears; we had experienced them up close.  “Why not use technology and make the forest safe from bears?”  The idea, once we heard it, was flat our brilliant.  It was also comforting.   If simple, it was magnificent.

“Here is how we will do it…” intoned the enthusiastic father.  “Why did we not think of this earlier?” was our immediate reaction.   “How many of you have dogs at home?” he asked.  Most of us did.  “How do you keep them on your property?”  A few of us used leashes, one a run, another a picket fence, but most had installed “invisible fences” around their yards.  These delivered a mild electric current to an errant or wandering dog, thus keeping the dog on his own property.  Nobody got hurt; the invisible wall worked.  “Invisible fences do work, don’t they,” asked the imploring father. We all agreed.  Yes, they worked – and worked well.

“And there we have it,” said the proud father.  “We just put up an invisible fence around our campsite and viola, the bears are out, we are in, problem solved!”  The idea had never occurred to the rest of us.  It did seem brilliant.  “Simple, straight forward, makes the forest safe from bears … they are here, we are here, but they have their space, we have ours, and everyone is safe.”  For the next 20 minutes we honestly applauded him, marveling with satisfaction at the simplicity of his idea.

Life was not so hard to figure, after all.  Even big problems, the sort that vex, seem complex, lead to a call for experts, frustrate patience and require time – sometimes have “bingo,” lights-on solutions.  They can be figured by the likes of us, simple folk.  They are about confidence, can-do and common sense, the sort enthusiastic fathers have.  Darned if we were not smarter than we looked.  We would do that for sure next time, and make the whole darn camping experience easier, and safer.

We had about us in the firelight the glow of omniscience.  We had the heady feeling people get hearing good and simple solutions, hearty and heady, if colorful and even gritty.  We had that feeling I recognize again in the faces of many good-hearted, “let it be simple” enthusiasts for Mr. Trump.  Forget the details, put aside complexity, forget the mess of execution, and leave implementation to another day.   Damned if being right is not a great thing.  And if life is frustrating, frustrate it right back.  Go simple, and if it takes getting mad, do it.  Do not expend effort on long term, when the near term delivers.

On that night long ago – a very real night – we were all glad to be done, at least in theory, with those bears.  The low-burning fire warmed our feet, nurtured our egos, and complemented our blissful wisdom.  Sticks flickered, flames retreated, red coals radiated.  All was good.  The future was bright.  Bears in forests across all the wild world would soon be on notice.  Like Mr. Trump’s ubiquitous simplicity, unburdened by detail or worries over implementation, we were making the forest great again.  Details later.

We had almost faded, heads nodding.  Darkness surrounded us.  There were mysterious crackles from the black, but we pushed them aside – content in our great idea.  Things grew still.  But I saw one father still wide awake.  He was looking into the woods, then back to the fire, then out into the woods again.   He seemed in deep thought.  Suddenly, he came back to us – and looked about the circle.  “Who is going to put the electronic collar on the bear?” he asked.

And there you have it in a nutshell.  The hardest problems can sometimes be solved easily, but more often not so.  The solution everyone wants can be too simple, just an elegant restatement of the problem.  Sometimes it takes steady eyes, steady mind and a courageous voice to say – “not so fast.”   Sometimes deeper thinking is more than advisable – it is necessary.

As we sit around our presidential primary fire, in this sobering season, a certain darkness filled with easy answers surrounds us.  But big problems are seldom solved in a blinding flash of brilliance, anger, bravado, or tweeted indignity.  There is no replacement for steady, even-keeled, level-headed, smart leadership.  What do you say we throw another log on the fire, sit back, and think a little harder?  Simple answers are deliciously deceptive, reassuring for wrong reasons, and sometimes dangerous.