Getting Back To Religious Freedom 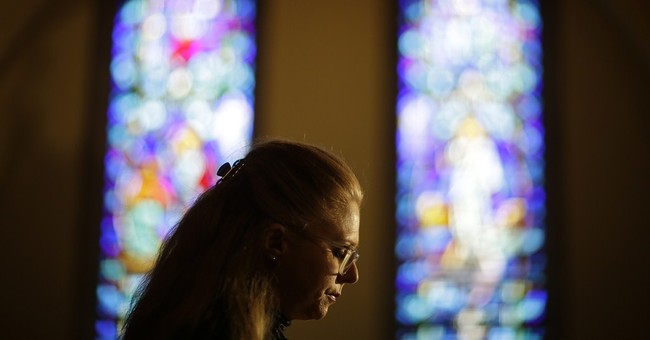 Talk of religious freedom and limiting it, seems to be everywhere these days. The US Supreme Court affirmed the right recently of townships to say a public prayer before a local meeting, which seems rather like declaring the sun’s right to rise in the East, if you consult the Founding Fathers’ writings – and their practices.

Meantime, atheist devotees – if there is such a thing as a formal devotee to atheism, since that might make them religious followers of non-worship – are trying to create the first non-religious religious chaplain in the military. Confusion seems to abound about what restrictions the Founder’s intended for State involvement in religious activities, and what freedoms they wholly expected never to be infringed by the State.

This confusion extends from prayer at local meetings – which a dissenting minority of the US Supreme Court still seems to be confused about – to turning military chaplains into atheistic psycho-babblers. It extends from limiting local control over long-established religious prerogatives to widening the natural divide between Church and State. Nevertheless, the essential confusion is simple – and resolvable by recourse to the Founders’ clear intent.

The core confusion that prevails today, whether we talk of religious freedom to erect a public crèche and cross or a community’s decision to demur, is the meaning of two phrases that appear in the First Amendment to the Bill of Rights. As Americans, we share a conviction that the Federal government shall never establish a “State” religion – and the parallel conviction that no State shall do so, pursuant to the application of the First Amendment to the States, through the Fourteenth. The operative phrase is this: “Congress shall make no law respecting an establishment of religion …”

At the same time, we share another conviction, namely the freedom to worship The Creator – or not to worship – as each and every individual American may choose. That religious freedom – indeed, the individual’s free choice to worship or not, and a community’s ability to defer to the majority in all religious traditions – is often traced to another portion of the First Amendment. That operative phrase is the second of that Federal proscription. “Congress shall make no law respecting an establishment of religion, or prohibiting the free exercise thereof.”

The confusion comes when these two phrases are viewed together, and average Americans – as well as currently dissenting Supreme Court justices – wonder to themselves, how much free exercise is allowed by an individual or by a collection of individuals who call themselves a majority in any given community, before State involvement is triggered at a level that amounts to the “establishment” of a religion.

The answer is – by reference to several of the Founders – not hard to ferret out. The Founders fully expected that “free exercise” would be just that, free and uninhibited, in no way “prohibited” by the State. Was religion important to them, indeed was the Christian religion important to most of them? Well, what do you honestly think? This guarantee was the first freedom granted in the first line of the First Amendment to the United States Constitution? Neither individuals nor communities, by a majority vote, would be barred from practicing fully – and freely – their faith, so long as that faith was practiced in an orderly way, a way that did not otherwise disrupt civil society.

Indeed, barring the “establishment” of a “State” religion was expressly intended to prevent devotees of the Church of England from mandating that this one religion become “The Church” of the new country. But there would be no reason to prioritize this proscription, without also prioritizing the all-important right of unencumbered “free exercise” by individuals and communities. The bar to “establishment” of one “State” religion was also, quite obviously, never meant to bar publicly spoken professions of individual faith, of any faith, in the public square, whether by an individual or by some organ of the media. That is probably one reason why there is such a close juxtaposition of three other rights with the right to “free exercise” of one’s faith. Those other three rights – just behind faith in the First Amendment – are the rights to free speech, press and assembly.

So, how did the Founders really think about the importance of honoring faith or orderly religion, as they framed this Amendment? The answer is found in their own words. James Madison, often referred to as the Father of the Constitution, writing a full three years before the Constitutional Convention, stated the main intent this way: “The religion … of every man must be left to the conviction and conscience of every man … It is the duty of every man to render to the Creator such homage, and such only, as he believes to be acceptable to him.” To Madison, the object of preventing “establishment” was to encourage free worship, that is, to leave the field of worship fertile, but able to be sewn with that variant of faith which best suited every man and woman, as their conscience dictated. The “no establishment” clause was hardly meant to dampen “free exercise.”

But Madison, arguably the most important chronicler of the Constitution’s evolution, went on. “This duty [to the Creator] is precedent in both order and time, and in degree of obligation, to the claims of civil society … Before any man can be considered as a member of civil society, he must be considered as a subject of the Governor of the Universe.” So, as you sit back and think about it, how important do you think the freedom to openly worship was to this Founder?

Perhaps Jefferson is more your style. You may take more comfort in his broader vision of faith than in Madison’s. Here then, are his words, written a year before the Constitutional Convention. Thomas Jefferson, revered author of our Declaration of Independence, wrote poignantly of the importance of preserving “free exercise” of religious faith. He advocated preserving this “natural right” because “Almighty God hath created the mind free; that all attempts to influence it by temporal punishments … tend only to beget habits of hypocrisy and meanness, and are a departure from the plan of the Holy author of our religion, who being Lord both of body and mind, yet chose not to propagate it by coercions on either, as was in His Almighty power to do …”

Did Jefferson want the “State” to stay out of the business of promoting a single religion? Yes. Did he want that so that the State would not suffocate a free People’s ability to freely and regularly worship as they pleased? What do you think? He wrote, also: “To compel a man to furnish contributions of money for the propagation of opinions which he disbelieves is sinful and tyrannical,” adding that religious “truth” draws us to it, given the chance. Thus, this “truth is great and will prevail if left to herself” since it is “the proper protagonist to error, and has nothing to fear from the conflict, unless by human interposition disarmed of her natural weapons …”

So were the Founders religious men? Did they raise religious families? Did they say prayers, in public and private? Did they seek to promote free exercise of religion, or instead to defile, dismiss, debar and fence it off from the public square? I think the facts speak for themselves. These were men who gave up everything to make this the first right in the first line of the first Amendment of our Nation’s Founding Document.

And so what is our job? Just this: To understand their fervent intent, to listen harder for the “truth” which lies within the “natural right” they recognized, and gave all to preserve, to see that nothing trumps “free exercise,” certainly not an appeal to State-sponsored atheism or to banning of “free exercise” from public places. Finally, we are obliged to hear Jefferson’s appeal that we avoid “habits of hypocrisy and meanness” as well as the modern tendency to “interpose” and “disarm” religious truth’s “natural weapons.” So, talk of religious freedom is good; limiting that talk is bad. And that constitutes our best dissent to the Supreme Court’s recently vocal minority, who would prefer to update Madison and Jefferson. For myself, I think we are in good company.