President Obama Should Stick to New Year's Resolution on the Debt 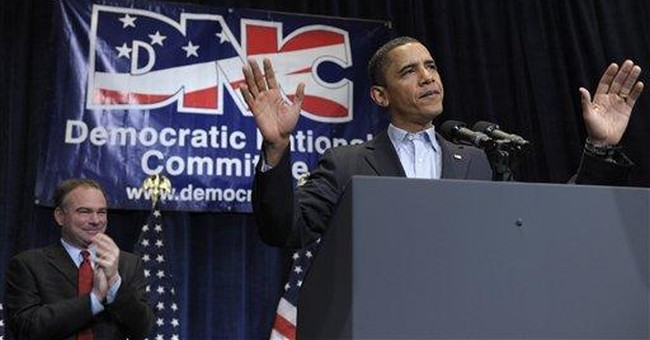 If you are still sticking with your New Year’s resolutions, congratulations. If, instead, you are warily eyeing the layer of dust on your new elliptical machine, take heart: everyone has a hard time with their resolutions. Even presidents.

Last year, Barack Obama made some headlines when he vowed to “get serious” about reducing the national deficit in 2010. But here we are at the beginning of February, faced with the fact that Congress just passed the biggest increase in the national debt in American history. In a move equivalent to calling up Visa and begging for an extension on a maxed-out credit card, last Thursday’s $1.9 trillion debt ceiling hike only delayed the nation’s fiscal crisis while doing nothing to address its root causes.

This latest borrowing authorization is twice the size of any previous increase. Yet we are somehow supposed to believe this is a new era of fiscal restraint. That’s roughly as credible as “getting serious” about weight loss by purchasing XXL elastic-waist sweatpants and installing a deep fryer next to your recliner.

Even if the president goes through with the freeze on discretionary spending announced in his State of the Union address, instead of borrowing $9 trillion over the next ten years, we will borrow $8.75 trillion. That’s an additional $30,000 for every single person in the United States, on top of all of our own credit card balances, student loans, mortgages and auto loans.

When Congress wants to spend more money, the Treasury holds an auction selling IOUs (or Treasury bonds) to the highest bidder. Lots of investors want to buy these bonds, because American debt is seen as a safe bet. These days, a lot of those investors are foreign governments – we owe China about $800 billion, for instance. We can do this, and at interest rates of only 3 or 4 percent, because of our spotless credit history: the United States has never defaulted on a loan.

That could change, however, if our debt continues to grow unchecked. According to the Congressional Budget Office, within a few years the national debt will exceed the nation’s gross domestic product. In other words, our debt will be bigger than the entire American economy. Lenders will lose their confidence in the U.S.’s ability to meet its obligations, and will demand higher interest for their loans. A sudden and unwelcome spike in rates could lead to a snowball effect, as the government borrows ever more money to afford its spiraling interest payments.

What will that mean for you? The Treasury market would drive up interest rates across the board, making it far more expensive for businesses to get loans for expansion and job creation. Mortgages and credit cards would shoot up as well, bringing the housing market and consumer spending to a screeching halt. Many people forget what the country suffered during the Carter Administration, with interest rates as high as 21% in 1980. They could soon go higher, if we’re not careful.

Want to lose weight? Eat less, and fire up your metabolism with some physical exercise.

Want to reduce the debt? Spend less, and fire up the economy with policies that create jobs and reward innovation.

The success rate of New Year’s resolutions is dismal: a 2007 study found that 88% ended in failure. This latest increase in the debt ceiling is hardly encouraging, but there is still time for the President and Congress to address our financial problems. Let’s hope they beat the odds and succeed.