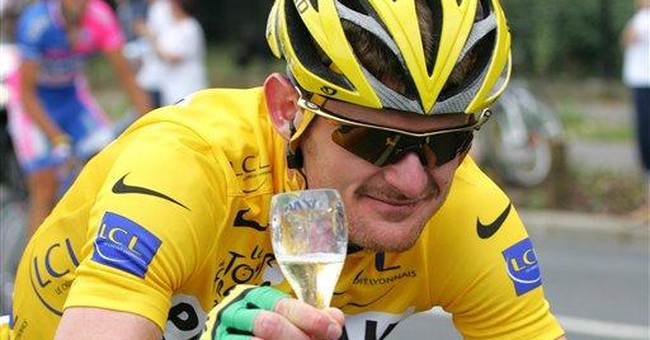 So where were you, exactly, on Monday, May 12, 2003? Oh, and prove it, please. I ask only because that happened to be my birthday. And while I’m certain it was enjoyable, I can’t remember what I did or where I went, and I certainly couldn’t prove I did or didn’t do something that day. Seven years is a long time ago.

But not in the hallowed pages of Sports Illustrated.

In the May 31 issue, a story entitled “Big Trouble” provides a platform for bicycle racer Floyd Landis to air his grievances against seven-time Tour de France winner Lance Armstrong. “In a series of e-mails to cycling officials and sponsors,” write Austin Murphy and Selena Roberts, Landis accused 17 riders, including Armstrong, “of doping or complicity in doping. Landis offered no documentation, though he says he kept journals that back up his claims.”

The authors seem eager to give Landis credibility. “For most of his career Armstrong has had to fend off allegations that he was not a clean champion. Nothing really stuck. This time could be different,” they write.

Landis told the magazine “that in early 2003 he was assigned by Armstrong to babysit bags of blood from Armstrong, Landis and [George] Hincapie for future transfusion.” He also claims “he ‘personally witnessed’ Armstrong, Hincapie and another U.S. Postal team rider, José Luis (Chechu) Rubiera, receiving performance-boosting blood transfusions during the Tour de France.”

Oh, and Landis “also described an afternoon in 2004 when the USPS team bus ‘stopped on a remote mountain road for an hour or so,’ ostensibly with engine trouble, ‘so the entire team could have half a liter of blood added.’”

Note the years of these alleged incidents: 2003, 2003 and 2004. Landis has, intentionally or not, made allegations that would be almost impossible to disprove. There’s no way Armstrong can go back and produce blood or urine samples from 2003 and 2004. And Landis admits he doesn’t have any tangible proof, either. So the entire case is going to be “he said, he said.”

Here’s what we know: Armstrong was tested, repeatedly, during those years. And he never failed a test. That doesn’t prove he wasn’t cheating, of course. Maybe he was cheating and he was just exceptionally careful not to be caught.

But the Armstrong described by Landis was anything but careful.

Would a careful man leave someone else in charge of his doping stash (or even let someone else know that such a stash exists)? Would he shoot up in the middle of the year’s biggest race, when testing standards are certain to be at their most stringent? Would he (and others) take injections in front of witnesses while sitting on the team bus? If Armstrong did do these things, and the authorities didn’t nab him, they’re incompetent.

In fact, Landis’ description of Armstrong sounds more like a description of himself. During the 2006 Tour (Armstrong didn’t compete) Landis lost his leader’s yellow jersey in stage 16 with a punchless performance, then bounced back in the next stage with an unprecedented move, gaining more than eight minutes against cycling’s elite riders.

“Make no doubt about it. What happened to Landis in the last 24 hours, his tragic defeat and stunning turnaround, is not a product of modern cycling,” wrote Bicycling magazine that July.

The author meant his words as a compliment to Landis, but they have a double meaning now. Landis tested positive for doping, and was stripped of the 2006 Tour title. Turns out his historic performance was as much a triumph of modern science (testosterone-injection style) as of modern cycling.

So why would he come clean now? “Landis, meanwhile, talks about clearing his conscience and about having come forward because WADA's eight-year statute of limitations was running out on some of the drug violations he allegedly witnessed,” SI writes. Yet as if to undermine its own story, the magazine adds, “but he also seems to be after a bit of revenge.”

For his part, Armstrong doesn’t seem worried. “It’s just our word against his, and we like our word. We like where we stand,” he told reporters when Landis made his charges. Armstrong also says he has no plans to sue his fellow cyclist. “[C]ynics,” SI adds, might decide “that Armstrong isn’t suing because he has zero desire to place himself under oath and be cross-examined.”

Or maybe he’s just tired of fighting against charges he cannot possibly disprove. Meanwhile, Armstrong is preparing for another Tour, and will be subjected to extensive drug testing. I predict he’ll pass, although we’ll probably still be talking about it (and reading about it in S.I.) in 2017.