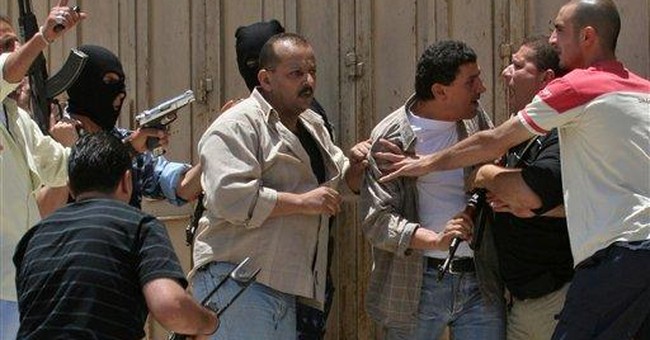 We see them on the streets and in the mirror: middle-aged men wearing jeans and baseball caps. Grown men, dressing and -- all too often -- acting like boys.

So where did we, an immature generation, come from?

On a recommendation from George Will, I picked up the book “Men to Boys, The Making of Modern Immaturity” by Gary Cross. Sadly, the book didn’t provide the answer.

Cross provides an in-depth review of American pop culture, which he sees as shaping people’s actions. He observes there were 27 westerns on television in 1959 (and he provides a recap of seemingly each one), and notes that these programs take a far different view of male responsibility than modern programming (think Friends or Family Guy).

Fair enough. But pop culture doesn’t drive our lives so much as it reflects our lives.

Consider one of the examples Cross highlights: The series of movies starring Mickey Rooney as “Andy Hardy.” Andy was a clueless but loveable boy, always ready to listen to and learn from the wise advice of his father, a judge. Rooney’s character was a great role model for boys in the 1940s.

But if pop culture was an effective driver of human actions, wouldn’t the movies have rubbed off on their star? Instead, Mickey Rooney made a hash of his life -- married eight times, addicted to gambling and drugs, etc.

So there has to be a bigger reason that our view of manhood changed, and that change has allowed Hollywood to change what it offers us. It’s a reason Cross doesn’t choose to delve into. It’s that, starting in the 1960s with the Great Society, government got steadily more involved in our lives.

For most of human history, men have been expected to take care of their families. There have always been exceptions, of course. Cross spends many pages describing Hugh Hefner and the Beat Generation poets as examples of men who opted out of generally accepted adult roles.

Still, the overwhelming majority of American men saw themselves as providers. If a man impregnated a woman, he usually married her. A man went to work and provided for his children. A man didn’t want to take any handouts. That was true in the 1950s, it was true during the Depression, it was true before our country was founded.

But the modern welfare state wrecked all that. Federal programs set out to remove stigmas, and ended up encouraging all kinds of bad behavior.

To cite one example, in 1950, only about 4 percent of births were to unwed mothers. That statistic topped 10 percent in the early 1970s, and keeps on climbing. Last year, it hit 40 percent for the first time. A generation of children that grew up without a father in the house raised another generation, which is now raising a third. Small wonder many boys never learn how to be a man.

Bill Cosby writes about growing up in Philadelphia amid working class black families. His parents remained married. Meanwhile, others around the neighborhood kept an eye on things and reported any misbehavior.

Those neighborhoods were replaced in the 60s and 70s with massive federal housing projects, where nobody could keep an eye on anything. The stairwells became drug havens, and most residents cowered in their homes rather than maintaining a watch on the children.

Meanwhile, federal welfare policy changed to encourage out-of-wedlock births. Men no longer needed to support their children; the government would do that. So they didn’t.

Fatherless children are so common that we read about them without even batting an eye.

A recent Sports Illustrated profile, for example, says that University of Texas basketball player Damion James, “didn’t learn the identity of his father until he was 17, when [his mother] pointed out a man named Jerry Bell, whose five other sons Damion had known growing up without realizing they were his half-brothers.” Even the father was clueless. “My father was never there for me, and I had promised myself I would be there for my kids,” Bell told the magazine. “I just didn’t know Damion was mine.”

It would be a sad story if it was a rare one. The fact that it’s a common story makes it tragic.

This matters, because President Obama and liberals in Congress are working hard to pass a health insurance reform package that would increase our dependence on government. They may have the best of intentions. But as with welfare “reform” and housing “reform,” reform that makes people more reliant on government usually backfires.

Real reform would involve changing the tax treatment of health insurance to create a true market for coverage. People would be expected to behave responsibly and obtain the coverage they wanted.

It’s time for our government to trust us. Don’t worry. We’ll behave like men (and women), even if we don’t always dress the part.