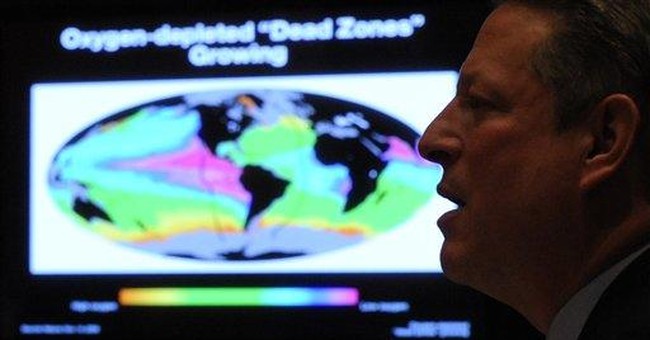 It’s a sad day when one must turn to the comics page of the newspaper, not the op-ed page, for wisdom. “Global warming is now called climate change,” explained the liberal character in the strip “Prickly City” on Jan. 27, “so no matter what happens it can be blamed on people.” Indeed.

But while there’s skepticism in the Style section, a belief in human-caused “climate change” remains alive on the op-ed page. New York Times columnist Thomas Friedman has leapt off that page with an entire book about the dangers of “climate change” (although he frequently errs and calls it “global warming” -- how quaint).

In “Hot, Flat, and Crowded,” Friedman lays out his vision of a sustainable planet. “We can no longer expect to enjoy peace and security, economic growth and human rights if we continue to ignore the key problems of the Energy-Climate Era,” he writes.

Like the blind squirrel that finds an acorn, Friedman’s actually correct about several of these items. Yes, the world needs to develop cleaner sources of power, and needs to deliver that power to more people. Our planet’s population is going to grow over the next several decades, and the developed West cannot simply tell people in the underdeveloped Rest to go on living in poverty. They want, and deserve a chance at, a better life.

There are two real problems: Friedman’s proposed prescriptions wouldn’t work, and he doesn’t seem to believe what he writes, anyway.

Let’s consider that second point first. There’s a reference on virtually every page to the author’s global travels. “In the fall of 2007, I visited two cities you may have never heard of—Doha [Qatar] and Dalian [China],” he begins one chapter. A few months later, “I flew to Bali [Indonesia] via Abu Dhabi, the capital of the United Arab Emirates.”

Friedman even provides restaurant reviews. Strawberry lemonade is “a specialty of the house” at “the faculty club on the palm-tree-lined Caltech campus in Pasadena,” he writes. Remember that the next time you’re dining there. Add it up and Friedman doesn’t have a “carbon footprint,” as the environmentalists like to say. He’s a carbon “Mariana Trench,” a crater so deep he’s miles and miles below sea level.

And that’s the point. Conservation, like charity, begins at home. If someone believes CO2 emissions are a problem, he would naturally attempt to limit his CO2 emissions. Instead Friedman is flying around the globe -- ironically, often to attend far-flung environmental conferences.

This doesn’t differentiate him from other “climate change” prophets, of course, since they’re at these conferences as well. And it doesn’t differentiate him from Al Gore, who won a Nobel Prize for his environmental theories while his Nashville home used 20 times as much energy as the typical American abode. It just means that, like the preacher who thunders on about sin while he steals from the collection plate, Friedman and Gore don’t really believe their warnings.

So what does Friedman hope to see? “If only we could be China for a day …” he writes (his italics). With just one day of top-down government decision-making, Friedman’s confident the United States could put into place the laws and regulations necessary to save the planet.

And the solutions are, apparently, self-evident. “What is our problem?” he wonders. “If the right things to do are so obvious to the people who know the most about the energy business, why can’t we put them in place?” Maybe it’s because the answers aren’t easy, and because every action would have an unexpected reaction.

Consider compact fluorescent light bulbs. Friedman touts them as a nifty way to reduce the use of electricity. And they may be. But they also contain mercury. What if, decades hence, all those CFLs piling up in landfills pollute our groundwater with a deadly heavy metal?

This may not happen. But it’s safe to assume that, if any government enacted sweeping changes in “one day,” it would end up triggering unforeseen problems months and years down the road.

We need clean energy, and only a competitive market will deliver it. “We need companies that view climate change not as a threat but as an opportunity,” David Douglass, vice president for eco-responsibility at Sun Microsystems, explained to Friedman. Companies should “think about how to create a whole new level of efficiency that can get an edge on the competition.”

The Chinese could be a big help here, by the way, if their government would finally enforce intellectual property rights.

American tourists brag they can buy pirated DVDs in China for pennies, but the joke’s really on Chinese entrepreneurs. As long as China’s autocratic leaders ignore copyrights, there’s no incentive for anyone in China to invent anything. By simply complying with international standards, though, China could unlock untold millions of creative minds, one of which might come up with the clean, renewable fuel of tomorrow.

In Friedman’s view, humans aren’t playing god; we are god. “Have we introduced so much CO2 into nature’s operating system that we no longer know where nature stops and we start in shaping today’s weather?” he wonders.

Probably, when Friedman wrote that, he was on a plane -- doing his part for the environment.