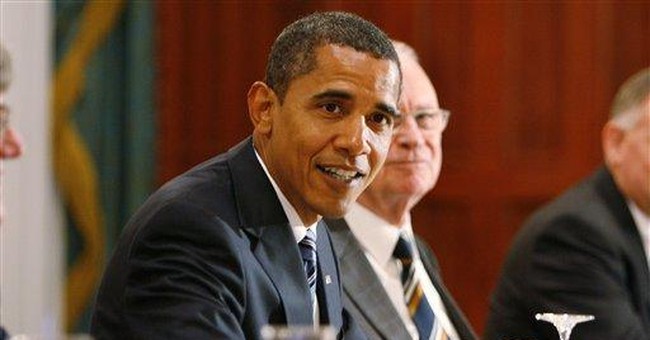 “The American people don’t want change,” a friend of mine said awhile back on CNBC. “They want something different.”

That’s a distinction without a difference, some would say. But perhaps not. Change can come in many forms, and they certainly aren’t all good or desirable. For example, Americans take it for granted we’ll enjoy an unlimited supply of electricity, 24 hours per day, all year ’round.

If we were to suddenly have rolling brownouts or blackouts, with the power going on and off unpredictably, that would indeed be a “change,” but one few of us would welcome.

This is a real-life example, by the way. In Virginia, Dominion Power plans to build a new transmission line, to deliver electricity to the growing suburbs of Washington, D.C. The new line is necessary, as even the editors of The Washington Post admit. “We agree that conservation and alternative energy are important,” they wrote on Sept. 2. But, “to avoid blackouts in Virginia, residents would have to curb energy use by 40 percent in the next few years.” And that’s not going to happen.

Besides -- why would Dominion Power want to build a line if it wasn’t certain it could sell the power? You cannot store electricity, after all. Once it’s generated it must be used or wasted. If the company is eager to build the line, it’s certain the power it delivers can be sold to customers.

Still, some environmentalists have made it clear they’d prefer “change” in the form of less energy use, which of course could mean cold, dark homes and warm refrigerators. For the rest of us, however, when it comes to power, the status quo looks pretty good. The only “change” we want is “more electricity.”

One irony of this election is that many of those echoing the call for “change” are in mainstream media newsrooms. Yet the goal there seems to be to remain as out-of-touch as ever.

Earlier this month, Americans met Joe the plumber when Barack Obama stopped to chat with him. Joe asked if Obama’s tax plan would increase his taxes. “It’s not that I want to punish your success. I just want to make sure that everybody who is behind you, that they’ve got a chance for success too,” Obama responded. “I think when you spread the wealth around, it’s good for everybody.”

Reporters immediately teed off – not on the candidate’s socialist-sounding sentiment, but on the innocent voter who’d dared ask a difficult question.

“Joe The Plumber’s name isn’t Joe, and he’s not officially a plumber,” wrote Marc Ambinder at theatlantic.com. (Joe’s given first name is Samuel). “Is ‘Joe The Plumber’ A Plumber? That’s Debatable,” an Associated Press story asserted. (Joe doesn’t have a commercial plumber’s license). ABC’s Diane Sawyer asked Joe, “To get straight here, you’re not taking home $250,000 now, am I right?” Joe admitted, “Not even close.”

That’s the point, of course. Joe’s not wealthy; not even close. But he aspires to be, and believes he can be if the government will leave him alone and allow him to buy the plumbing business he works for. He fears that Obama’s “change” -- his redistribution of wealth -- would hurt him. In its race to destroy the messenger, the mainstream media seems to have missed that entirely.

Or consider the furor over Colin Powell’s recent endorsement of President-designate Obama.

It’s clear to anyone who’s read Bob Woodward’s series of semi-fictional books about the Bush administration that Powell broke ranks with Bush long ago. (Woodward hasn’t actually written this sentence, but here’s what an internet “random sentence generator” could come up with if programmed to ape Woodward’s style: “Powell realized everyone else in the room was a stark-raving idiot. But what could he do? Surrounded by incompetence, from Bush through Cheney, Rumsfeld, Snow, etc., he had to muddle through, doing the best he could to steer the country on to the right path...”)

Yet the press coverage of Powell’s announcement made it seem as if Powell’s decision was groundbreaking. In fact, the only thing notable was that some of Obama’s vehement left-wing supporters decided to hold their noses and their tongues. A spokesman for MoveOn.org told CNN it didn’t like the Powell endorsement, but would remain silent so it wouldn’t “disturb” Obama’s march to victory.

With President Bush’s approval ratings well under 25 percent, it’s beyond doubt that people want “something different.” Just what kind of change they want, though, is still a matter of debate. We’ll soon find out.