Searching for the Real Unifier 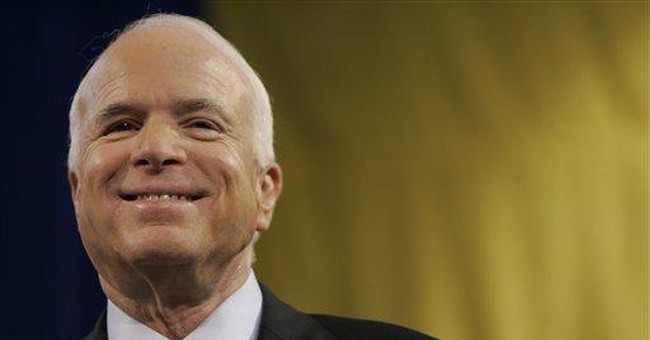 Some questions answer themselves.

For example, the cover of the September issue of The Atlantic magazine asks, “Who’s the real Unifier,” Barack Obama or John McCain. “Obama and McCain both say they want to usher in a new, less divisive brand of politics. Which of them has the better chance?” the story’s introduction asks.

The entire piece could have been two sentences long. “Since arriving in the Senate, in 2005, [Obama] has voted with a majority of Senate Democrats almost 97 percent of the time, according to Congressional Quarterly,” writes longtime political commentator Ronald Brownstein. Meanwhile, “McCain has voted with a majority of Republicans 85 percent of the time since entering the Senate, in 1987.”

That record provides your answer. McCain has often taken positions that angered conservatives, and he’s reached out to liberals for help on everything from federal judges to campaign finance reform. If either man can “unify” the country -- and that’s unlikely -- it’s McCain.

And on a broad scale, if either party is the “big tent” party, it’s the GOP.

Recall that Sen. Zell Miller, a life-long Democrat from Georgia, gave the keynote address at the Republican convention four years ago. And Sen. Joe Lieberman, abandoned by the Democrat netroots but re-elected in Connecticut as an Independent two years ago, will speak to this year’s GOP gathering. Can anyone remember a Republican being invited to the Democrat convention?

But this is The Atlantic, so a two-sentence answer -- no matter how complete -- wouldn’t have sufficed. Brownstein rambled on for several pages, so let’s take a closer look at some of his more questionable statements.

“American voters nearly always elect a president who responds to the flaws they have found in his predecessor,” Brownstein begins. As an example, “Jimmy Carter was more honest than Richard Nixon.” While that’s probably true, it’s also true that Carter followed Ford, not Nixon. Oops.

Brownstein adds that George H.W. Bush was elected because he was “kinder and gentler” than Ronald Reagan. Hum. That’s not exactly right. He was elected because the country wanted to give Reagan a third term, but couldn’t (that pesky Constitution!) so took a chance on Reagan’s second-in-command. Still, while we’re playing the opposite game, let’s try a couple more.

Maybe Americans were tired of Eisenhower’s experience and competence, and so elected JFK. Maybe they were tired of George H.W. Bush’s buttoned-down fidelity, and so went with the swinging Bill Clinton. Et Cetera.

Brownstein also takes McCain to task unfairly. “Obama’s language about his opponent generally has been restrained,” he writes. “That’s emphatically not the case when McCain talks about Obama. McCain seems incapable of masking feelings about his younger opponent that border on disdain. He often says that Obama, a member of the Senate Foreign Relations Committee, has ‘no experience on national-security issues.’”

Yes, but isn’t truth the best defense against libel? McCain’s making the very point he must make if he hopes to win this election. He’s got the experience, Obama doesn’t. It isn’t “negative campaigning” to point that out; it’s a matter of political survival.

Obama realizes this, and is touchy about the question of experience. “Well, actually, my experience in foreign policy is probably more diverse than most others in the field,” he said during the Democrat primary process. “I’m somebody who has actually lived overseas, somebody who has studied overseas. I majored in international relations.”

But maybe Obama ought to go back to school. “While pressing Obama to visit Iraq with him, McCain said he would use such a trip to ‘educate’ his rival,” Brownstein writes. Again, though, McCain’s making a good point. Recall that last year McCain strongly supported the then-controversial “surge” into Iraq. Obama opposed it.

In the fall of 2006 the Illinois senator said, “It is clear at this point that we cannot, through putting in more troops or maintaining the presence that we have, expect that somehow the situation is going to improve, and we have to do something significant to break the pattern that we've been in right now." That something would, apparently, have been to withdraw troops.

Now that the surge has worked, though, Obama’s eager to celebrate the fact that U.S. troops will be able to pull out in the months ahead. But that’s only because they followed McCain’s formula, not his. And they’re leaving having stabilized the situation in Iraq.

There’s no doubt which candidate has experience reaching across the aisle to members of the other party. The question is: Do voters even care? We won’t know that until November.