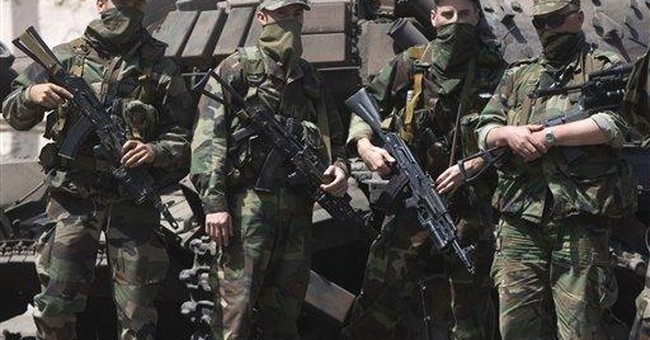 Well, it was fun while it lasted.

When the decrepit Soviet Union collapsed in 1989, it looked as though the U.S. and our allies would be able to preside over a future of peace and prosperity, governing the planet through our soft power (economic sanctions) rather than hard power (military might).

That made sense to leaders who grew up with memories of the horrors of World War II. The use of hard power had, in their lifetimes, led to millions of deaths. And for a few glorious years, it worked.

In the early 1990s, Russia came -- hat in hand -- begging to be allowed into the “Group of 7,” the largest industrialized nations in the world. It should have served as a warning to the rest of us that world leaders at that time decided to include Russia only because it had so many nuclear missiles. What it lacked in economic clout it made up for in hard power.

Last week Russia reminded the world that hard power counts. Russian tanks rolled into Georgia, a Western-leaning democracy. Georgia had been angling to be allowed to join NATO, as many other former Soviet satellites (Poland, Hungary and the Czech Republic among them) have done for their own protection.

But at this point, these countries may be wondering if they backed the wrong horse. Would it have mattered if Georgia was in NATO? When Russia invaded, it was confident that the West wouldn’t send tanks and troops to help protect Georgia.

After all, “nobody wants to die for South Ossetia,” as Mark MacKinnon, the author of “The New Cold War,” put it.

Well, fair enough. But then again, nobody wants to die for anything. Yet if a country maintains a military, it is by definition assembling a group of people trained to kill, and willing to take the risk they will be killed in service to their country. Russia’s troops are taking that risk.

Even if Georgia had been in NATO, there’s no reason to believe that, say, Germany, would have been eager to rush soldiers there to protect it. For example, let’s remember that the September 11 terrorists were part of a terrorist cell based in Hamburg. That should have served as a warning to the Germans that the war against al Qaeda was their war, too.

Yet Germany hasn’t deployed nearly enough troops to Afghanistan, where NATO is taking the lead in battling al Qaeda. The German government will only allow its forces to be deployed in Northern Afghanistan, where there’s little fighting. And its soldiers are only allowed to fire in self-defense, an obvious handicap in a shooting war.

Instead of answering force with force, Germany’s leader responded to Russia’s attack with meetings and words. “We very much want the six-point plan to be implemented very promptly so that Russian troops are no longer in Georgia, outside Abkhazia and South Ossetia,” Chancellor Angela Merkel announced after meeting the Russian president.

All well and good. But that’s not what the Russians want, and they’re the ones driving tanks and holding guns.

The West is going to learn a difficult lesson in the years ahead: People with hard power don’t respect soft power.

The U.S. stands almost alone as a hard power Western nation. Britain has some, Spain some, Italy some, Germany some, but not enough and not always the political will to use it.

Western Europe, meanwhile, likes to think it has plenty of soft power. But in fact it really doesn’t even have that. Almost a third percent of Europe’s oil comes from Russia. Germany gets about a third of its natural gas from Russia. France gets about 20 percent. If Russia decides to shut off its energy exports Western Europe’s economy could quickly grind to a halt. The consumer has become the hostage.

Soft power is a smokescreen that countries with no power deploy. Russia’s military has created a gentle breeze that’s blowing the smokescreen away. It’s not too late for America’s NATO allies to wake up and rearm. But they need to wake up and move quickly.