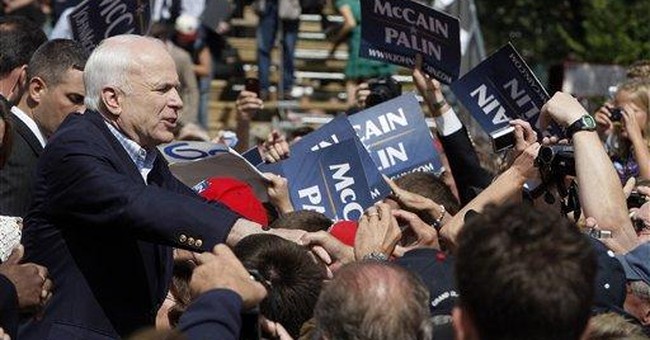 ST. PAUL, Minn. -- Who is president of the United States again? Oh, yeah, he's the guy whose speech at the Republican Convention was canceled Monday night, with a sense of palpable relief from party mandarins. He's the guy who spoke briefly Tuesday night via satellite. He's the guy who John McCain gave one pro-forma mention of at the beginning of his acceptance speech, before spending the rest railing against the status quo.

It is George W. Bush's fate to be present, still in office with the awesome powers of the presidency, at the end of the Bush years. For stretches this year, culminating in his ballyhooed overseas trip, it seemed as if it were already the Obama years. Not so fast.

The McCain campaign believes that there are twin tests this fall. One is whether Barack Obama is ready to be commander in chief; the other is whether John McCain represents change. Even if Obama fails to meet his test of readiness, he will still win if McCain fails the test of change. It wasn't enough for McCain to mock Obama in his deadly "not ready to lead" ads. He had to re-establish his outsiderness, and did it with his electrifying pick of fellow reformer Sarah Palin, whose Alaska governor's desk sits no less than 2,800 miles from Washington.

The attractive "hockey mom" of five dominated this convention -- not because the mere mention of her name was enough to bring otherwise listless Republican delegates to their feet; not because her acceptance speech might have been the finest performance of either convention; not because she drew nearly as many TV viewers as Obama. No, Palin dominated as the pivot point when McCain decided to wheel against the Beltway status quo with his maverick feistiness of old.

As McCain said in his acceptance speech, "Let me offer an advance warning to the old, big-spending, do-nothing, me-first, country-second Washington crowd: Change is coming." McCain didn't come to bury Obama; prior speakers had done that in a barrage of derision directed at the would-be community organizer in chief. McCain came to co-opt Obama's appeal.

McCain diagnosed the rot in Washington not as Bush policies, but excessive partisan rancor driven by people who "go to Washington to work for themselves and not you." He used his personal narrative as his country's "servant first, last and always" to argue that he's the man to drain Washington's swamp.

He pledged "to get the country moving again," a classic "out" party message (and one JFK had used against Richard Nixon in 1960 at the end of the Eisenhower years). French President Nicolas Sarkozy pulled this counterintuitive outsider trick off last year, running as an insurgent even though the unpopular incumbent, Jacques Chirac, was from his own party. McCain hopes to play Sarkozy to Bush's Chirac, and do it partly via Hillary Clinton.

For Sarah Palin's other contribution to McCain is to point him downward, toward the lunch-bucket concerns of the working-class voters that Hillary won in the primaries. McCain's politics of honor can be as unsatisfyingly abstract as Obama's politics of hope. No more. With a new Palin-enabled populism, McCain the "fighter" for you evoked the struggle "to buy groceries, fill your gas tank and make your mortgage payment."

All to the good. Yet McCain can't succeed unless he sells a domestic agenda to match a populist message of change. Most of the time, his convention was hermetically sealed from substance. At its worst, it was reminiscent of 1992, when Republicans thought harsh put-downs of the upstart Democrat and paeans to their candidate's biography would carry the day. It didn't, and Bob Dole couldn't beat Bill Clinton with a war record in 1996, either.

Everything the McCain campaign has done in the past two months, from the "celeb" ads to the choice of Palin, speaks to an unexpected vitality and fearlessness. McCain is in the race; now he needs to tell voters exactly how the McCain-Palin years would be better for them.