The Audacity of Haughty 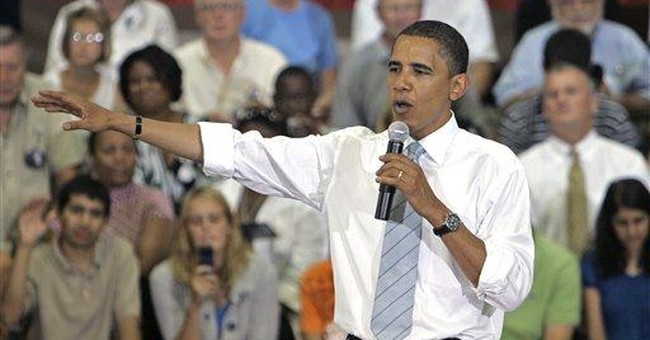 "It's almost as if they take pride in being ignorant," Barack Obama mused the other day, blasting Republicans for ridiculing his exhortation to the nation to make sure its tires are properly inflated.

Ah, behold the open-mindedness and cross-partisan understanding. Remember two years ago when Obama was only a media darling and not yet The Anointed One? Back then, his appeal was the extraordinary sensitivity he had for the views of others. He wrote a best-selling campaign book called "The Audacity of Hope" that was carefully unaudacious in its on-the-one-hand, on-the-other-hand weighing of the issues of the day, giving the impression that nothing pained him so much as not being able to agree with the other side, though he thoroughly understood and respected its arguments.

That iteration of Obama was tossed under the bus long ago (no word on whether the tires were adequately inflated). It's been replaced by an Obama who -- between pauses gazing regally into the middle-distance during his orations -- betrays a dismissive contempt for all differences of opinion.

"Nobody really thinks that Bush or McCain have a real answer for the challenges we face," he said, responding to a John McCain attack ad. Nobody does? Are all those people who vote Republican simply delusional? Or are they pretending to believe things that they really don't to conceal unseemly motivations -- power-hunger, bitterness, racism?

The most elemental act of political civility is to concede the good motives of your opposition. Obama lately can't even muster that. Of course, sharp elbows will inevitably be thrown in a hotly contested election, but it's no accident that Obama's comments reading his opposition out of polite company -- or almost entirely out of existence -- came in response to mockery.

Obama is now such a puffed-up figure that he's vulnerable to the pinprick of ridicule. The most devastating hits against him in the Democratic primaries were made by "Saturday Night Live," which made fun of him as an earnest empty suit propped up by a fawning media. Having failed to get much traction against Obama heretofore, the McCain campaign scored recently with a pointed but lighthearted ad comparing him to Britney Spears and Paris Hilton and the distribution of tire gauges to mock his tire-pressure comments.

"They're making fun of a step that every expert says would absolutely reduce our oil consumption by 3 to 4 percent," Obama said of the tire gauges, suggesting that the making-fun particularly bothered him. Of the Spears/Hilton ad, Obama complained: "They got me in an ad with Paris Hilton. You know, (I) never met the woman."

As if the McCain campaign were literally suggesting that he and Paris coordinate on their Sidekicks about what clubs they're going to frequent after a long day of campaigning. Hilton, in contrast, got the joke and went up with a Web ad lampooning McCain that was defter and more effective than Obama's earnest plaint.

It has to be hard for Obama to maintain a sense of proportion. First, it has become Democratic dogma that in reply to any Republican attack, a Democratic candidate has to hit back twice as hard. This makes it impossible to calibrate a response -- the only option becomes the nuclear option. Second, given the idolatry of the press and his most fervent supporters, Obama would need prodigious reserves of humility to keep from taking himself too seriously.

On the question of tire pressure, he was wrong when he said that properly inflating tires would save enough gas to make up for whatever oil we might get from more offshore drilling. Only an estimated 27 percent of cars have underinflated tires, and having properly inflated tires saves at most only 3 percent on gas consumption, so the number gets quite small. Obama's estimate of an overall savings of 3 percent to 4 percent on gas consumption is wildly optimistic. But it's his critics who are ignorant (and proud of it!).

The new Obama is displaying the audacity of haughty.