That Special Election in Georgia

Rich Galen
|
Posted: Jun 22, 2017 11:40 AM
Share   Tweet
The opinions expressed by columnists are their own and do not necessarily represent the views of Townhall.com. 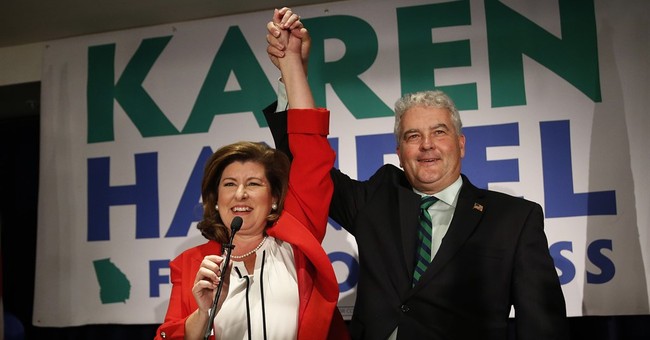 As you may remember, after last November I completely got out of the prediction business. So, I have no idea what the recent result in the special election to fill the vacancy in Georgia's Sixth District Congressional seat will mean 17 months from now.

Nor, do I have any idea what it portends.

I had to look up the difference between "predict" and "portend." It turns out "predict" is to state something that will occur in the future - especially using inference or special knowledge.

To "portend" is to serve as a warning or an omen.

So, I will not predict what will happen in the mid-term elections of 2018 but I'm pretty sure the Georgia 06 special did nothing to portend the outcome.

In case you missed it, there was a special election in Georgia on Tuesday. It became a big deal because it was district held by now-HHS Secretary Tom Price (and in an earlier era, Newt Gingrich). Price had won re-election easily last November, but Donald Trump only carried it by about 1.5 percentage points.

Thus, it became the poster child for the Democrats to prove that a Republican District was vulnerable because (a) Democrats would put down their banners and signs long enough to go vote and (b) Republicans, embarrassed by Trump, would hide in their basements until it was all over.

The Republican candidate, Karen Handel, beat the Democrat, Jon Ossoff, by four percentage points: 52-48. Not Tom Price numbers but they translated into about a 10,000-vote victory.

What made this special election so special, was that the candidates, the national parties, and outside groups poured upwards of $50 million into this race.

Everyone with a keyboard or a chair at the table on a cable chat show in Washington has an opinion as to why the Democrat lost. I don't know, other than this is a marginally Republican district and neither side want to make Donald Trump the issue on which the thing turned.

Handel didn't run with Trump, and Ossoff barely mentioned him lest he'd have scared off Republicans who weren't particularly enamored with Handel.

As usual, everyone who has ever actually typed the word "Republican" took credit for the win while, as The NY Times put it:

"Among Democrats in Washington, the setback in Georgia revived or deepened a host of existing grievances about the party, accentuating tensions between moderate lawmakers and liberal activists …"

"… and prompting some Democrats to question the leadership and political strategy of House minority leader Nancy Pelosi."

As a reminder, Nancy Pelosi had a 79-seat majority when Barack Obama began his first term in 2009. She successfully squandered that in the first mid-term election in 2010, losing 63 seats, the majority, and her title as "Speaker of the House."

Why House Democrats have stayed with her through the past four - unsuccessful - elections is beyond me, other than it is further evidence that the Democratic "bench" is so thin that there is no one capable of challenging the Alpha Female of the Democratic Party.

It's not like the House GOP has been a well-oiled juggernaut. John Boehner resigned from Congress (and, coincidentally as Speaker) on October 30, 2015 because his raucous conference had become unleadable.

In the more than five months of GOP control of the House and Senate since Trump's major, huge, incredible inauguration, approximately zero major legislation has become law.

And yet … Georgia 06 happened. The Democrats couldn't buy themselves a House seat that appeared ripe for the selling.

Now, of course, the very same people who were sure Hillary Clinton was going to win the Presidency as late as 8 p.m. election night are confidently telling us what is going to happen next - not this - next November.

It is likely that Democrats will pick up seats in the House, but the betting line on whether they can take control of the House changed dramatically because of that special election in Georgia.