Rich Galen
|
Posted: Mar 23, 2017 11:15 AM
Share   Tweet
The opinions expressed by columnists are their own and do not necessarily represent the views of Townhall.com. 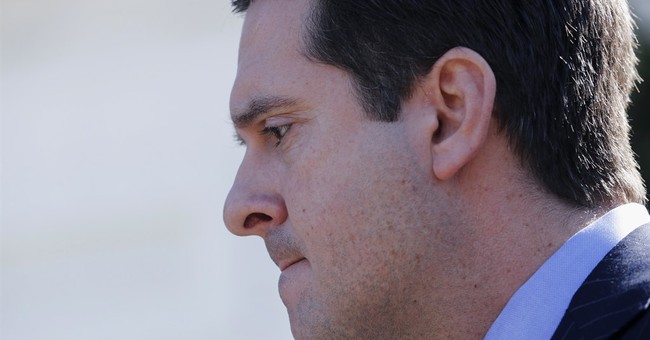 We need an independent investigation into the doings of the Donald Trump and the people around him during and after the campaign as they pertain to Russia.

Yesterday, the chairman of the House Permanent Select Committee on Intelligence, Rep. Devin Nunes (R-Ca), got some information, shared it with Speaker Paul Ryan, held a press conference, went to the White House, shared it with the President, held another press conference and then stood by while the District's collective head exploded because Nunes never shared his information with the senior Democrat on the committee before he went on his grand tour.

Nunes said, in sum, that he had seen information that some members of the Trump campaign may have been caught up in surveillance not because they were the targets, but because they were communicating with someone that was a target.

And he told this to the very people who were likely swept up in this incidental surveillance - the President and some (if not most) of his senior staff.

Nunes reminded me of the kid who has had to sit at an end table during lunch for all of his educational career; even having attempted to curry favor with those sitting at the cool kids' table by passing along gossip, day after day.

It never works. An occasionally empty seat at the cool kids' table always goes to someone else.

The aforementioned senior Democrat on the House Intelligence Committee, Rep. Steve Schiff (D-Ca) raced out to say, according to The Hill newspaper:

"There is 'more than circumstantial' evidence pointing to collusion between the Trump campaign and Russia."

In Washington, DC this is known as Dr. Dr. Isaac Newton 's third law of political reverberation: For every action, there is an equal and opposite reaction.

If Nunes thought he was helping the guy who currently owns the cool kids' table, President Trump, he was wrong. He might have moved the headlines off the What-did-Trump-know-about-Manafort's-Russia-connections-and-when-did-he-know-it story for the day, but it did nothing to counter that story.

FBI Director James Comey testified earlier this week that his organization has been investigating the Trump Team's relationship with Russian spies, oligarchs, shady political figures and, potentially, heads of state.

Nunes also said that there was nothing in the materials he had seen that gave any credence to Trump's whacky Tweet from a couple of weeks ago accusing Barack Obama of having tapped his wires. So that's still hanging out there.

If there is anything to the old idiom "If there's smoke, there's fire" then Devin Nunes, Wednesday, was Wile E. Coyote running up and down Pennsylvania Avenue between the Capitol and the White House with a giant Acme Smoke Generation machine.

I don't know what form of the independent investigation should take. Obviously, it can't be anything that would allow President Trump to have a vote as to its composition or its scope. It has to be authorized and constituted by the Congress.

The U.S. Congress is sitting on a national approval rating of 20.8 percent according to the RealClearPolitics.com polling summary.

The saddest thing about that 20.8 percent approval is that's the highest it's been since June 19, 2011. Almost six years ago.

The President, again according to RealClearPolitics.com, is 8.8 percentage points underwater in his approval rating (43-51) with NO poll showing him anywhere near 50 percent.

In the end it probably ought to be a Select Committee that is bipartisan (Rs and Ds) and bicameral (House and Senate). Each leader of each party in each Chamber gets to pick, say three members of this Committee - that would total 12 Members and Senators.

The panel would be granted full subpoena powers, full investigating authority, secure office space, a budget that would allow it to hire appropriately qualified staff, and should be given a deadline by which it had to report - to keep it as far as possible from November 6, 2018 - the date of the midterm elections.

There's something going on and it needs to be dragged, kicking and screaming if necessary, into the light.

Donald Trump may well be innocent of any wrongdoing as it pertains to Russia. If so, a thorough investigation might well be the best thing that could happen to Republicans in 2018 and 2020.

If not, then having it out in the open would be the best thing that could happen to the nation.