Rich Galen
|
Posted: Mar 13, 2017 12:01 AM
Share   Tweet
The opinions expressed by columnists are their own and do not necessarily represent the views of Townhall.com. 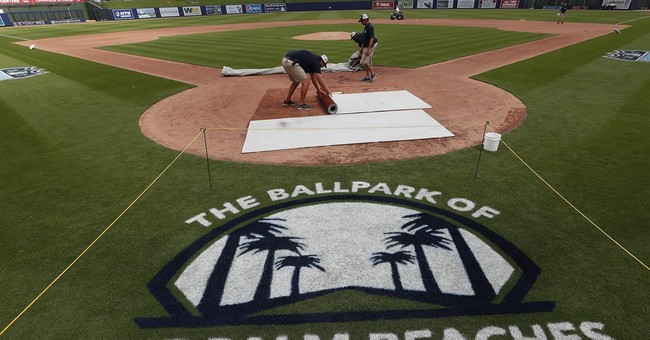 Let's take a day off from mulling about President Donald Trump, his appointees, the Congress, and their Tweets, statements, interviews, and general demeanor.

Trips off the tongue, doesn't it?

You may remember that I covered the Nat's for about three years for northern Virginia weeklies. My press credentials this weekend are courtesy of the Nats' communications team which bought my pitch that if they allowed me press box access I'd write a column about it.

This is the first year of this facility which the Washington Nationals share with the Houston Astros. From 2005 through last Spring, the Nats made their home at Space Coast Stadium in Viera, Florida about 130 miles up the Atlantic coast.

The best thing - the only thing - about being in Viera was you could watch Space Shuttles launch. As the last Space Shuttle was launched in 2011, gazing at the Atlantic Ocean horizon in hopes of seeing something other than seagulls has been disappointing for the past six years.

Now, here in West Palm Beach, you can get stuck in traffic waiting for a Presidential motorcade to come by en route to or from President Trump's Mar-a-Lago resort if he's in residence (which, this weekend, he is not).

Not exactly a shuttle launch, but exciting in its own way.

The Nats share this facility with the Houston Astros. They have their own clubhouses and training facilities, but they share the main stadium and the parking. With two teams trading home dates (except for days like today when they are playing each other), it means the concession stands and vendors get almost twice as many sale days.

The security staff and ushers make almost twice as much (ushers start at about $11.50/hr I was told after prying that info from an usher who acted like I was asking for Donald Trump's glove size) and the teams only need one set of groundskeepers, maintenance personnel, and so on.

Another paired facility is Roger Dean Stadium about half an hour's drive north of TBotPBiWPB,F where the Florida Marlins and St. Louis Cardinals have a similar arrangement.

We hear all the time that "Spring Training games are meaningless." Maybe the final scores are, but the games themselves have three main groups of player with more than a passing interest.

First are the regulars, the position players and the pitchers who are certain to make the regular season, 25-man, roster. These games give them the chance to rebuild the muscle groups unique to their profession and to their position.

The second group are the young players trying to make their way onto the major league roster and become one of the 1,200 men at the top of their sport. According to one study the average age of a first-time major leaguer is 24.4 years. They last an average of six seasons. So a minor league player in his mid-to-late 20s knows the clock is running and the window of his dream may be closing.

Not only that, but to say minor league salaries are far below those of players in the Bigs is to say a 50cc motor scooter is not as powerful a road machine as a Formula One racer.

The minimum salary for a player in the lowest minors - Single A - is $1,150 per month, but only for the six months of the season. Total take is less than $7,000. The minimum salary in 2017 for a player on a Major League roster is $535,000 per year with the average for all players last season coming in at about $4.4 million.

The third group are the older guys who have been in the Majors but whose best years are behind them. These are often known as "journeymen" players - bouncing from club to club to fill a need for a season (or a part of a season) in the bullpen, or the outfield, or as a utility infielder. These man are not going to get paid in the hundreds of millions with much of it deferred well into the future, but one more season at two or three times the minimum certainly helps put the kids through college and makes the car payments.

The big winners, here at TBotPBiWPB,F are the fans. Nationals Park holds 41,313 fans. This park has a capacity of 6,500. So, it is a much more intimate experience. The days of a seat, a hot dog and a beer for $10 at a Spring Training game are long gone. Parking is $10, a bratwurst is $7, the cheapest beer is $8.50 and the lowest-priced "seats" are on the grassy knolls in left- and right-center field. The seat is the grass. The top tickets (Home Plate Box) go for $55 per.

So, the day can't cost less than $42.50 and that doesn't include the two hats for the grand daughters at $25 a piece.

It doesn't matter. It's baseball in March and it's an appetizer for the season that begins at home against the Miami Marlins on April 3.

And as Mullpal Bill Greener is wont to say: "From the opener on, it's baseball every day."

NPR Is Threatened by DeSantis' Motto for Freedom
Sarah Arnold

Here's Where a Fox News Panel About the FBI's Ransacking of Mar-a-Lago Went Off the Hinges
Townhall
David Axelrod floats reason Rep. Liz Cheney's 'not able to campaign for re-election'
Twitchy
Rep. Scott Perry Reveals the Concerning Info FBI Told Him About Seizure of His Phone
Redstate
Another Huge Red Flag in the Trump Raid Story
PJ Media