Rich Galen
|
Posted: Jan 16, 2017 12:01 AM
Share   Tweet
The opinions expressed by columnists are their own and do not necessarily represent the views of Townhall.com. 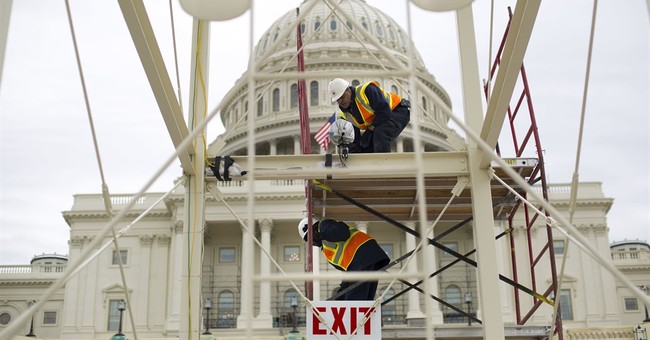 Friday is Inauguration Day. Even if I didn't live just across Potomac River from Washington, DC, and even if my office weren't six blocks from the White House, I would know this is Inaugural week because this will be a two-day work week for many of us in Our Nation's Capital.

Today is Martin Luther King, Jr. Day, which is a holiday, so no work. Tuesday and Wednesday are regular office hours. The road closings and security arrangements begin to kick in at midnight Thursday morning, so many offices are making that a "best effort" work day.

Friday is Inauguration Day, the day when 700,000 (or so) people who have no idea where they're going or how to get there will have shown up to celebrate Donald J. Trump's swearing-in.

Because of the nature of this year's election, those 700,000 will be check-by-jowl with another couple of hundreds of thousands of people who will be in town to demonstrate against that same Donald J. Trump's swearing-in.

Nearly a million people who don't know Washington, DC and don't like each other is pretty much my working lifetime answer to the question: Around whom would you least like to be on Friday, January 20, 2017?

Like most things in America, Inaugurations have grown and grown and grown since the first one. That would have been George Washington's swearing-in on April 30, 1789. The new Constitution (having replaced the Articles of Confederation) went into effect on March 4, but neither the House nor the Senate, meeting in New York City, could raise a quorum and so the Electoral Votes could not be counted.

They finally got enough Members of both houses to NYC on April 6 when the votes were counted, Washington was certified as the President (with John Adams proclaimed VP) but Washington wasn't hanging around buying Manhattans for the Members, he was at home in Mount Vernon and wasn't official informed of the outcome until April 14, 1789.

That was not because the Russians had hacked Washington's email, it was because there was no FedEx or UPS with next-day delivery services.