Rich Galen
|
Posted: Sep 13, 2016 12:01 AM
Share   Tweet
The opinions expressed by columnists are their own and do not necessarily represent the views of Townhall.com. 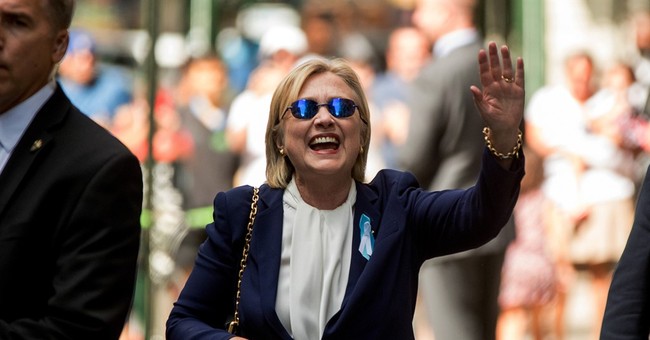 Hillary Clinton had her worse weekend of the entire campaign. First, she came up with that deplorable line about Donald Trump's supporters.

"You know, to just be grossly generalistic, you could put half of Trump's supporters into what I call the basket of deplorables. Right?" Clinton said. "The racist, sexist, homophobic, xenophobic, Islamaphobic-you name it."

I looked -up "xenophobic" for you.

According to Merriam-Webster: Unduly fearful of what is foreign and especially of people of foreign origin.

Yeah, I was pretty sure that's what it was, too, but I thought I should check.

Giving credence to the Upper-West-Side nature of Clinton's remark, the audience laughed and clapped appreciatively.

Second, this wasn't captured by a wine-passer with a smartphone hidden in his sock at a fund raiser. This was captured by the press that was invited into the fund raiser, so she knew it would be recorded.

Third - and to my mind the most troubling - is in her full quote Clinton says, "what I call a basket of deplorables." "What I call…?" Does she around with her closest advisors who have been around her for twenty years, acting like the mirror assuring her "You are the fairest in the land" talking about "baskets of deplorables?"

They should be known as her "basket of adorables.

That indicates she has used this imagery before. Like to know where and when.

We now know that when she did that fundraiser on Friday, she had already been diagnosed with pneumonia. Walking pneumonia, apparently.

Whenever I say (or think) the words, "walking pneumonia" it say it (or think it) to the tune of "Waltzing Matilda." You will now, too.

The campaign didn't feel it needed to share this information until Mrs. Clinton nearly collapsed at a 9/11 memorial event and had to be bundled into her SUV by her security detail. After a 90 minute press black-out, Clinton emerged by her daughter Chelsey's apartment looking hail and hearty, kissing a baby (which is how she probably got pneumonia in the first place) and declaring it a "beautiful day in New York."

Thereupon she was driven to her mansion north of the City where she took to her bed, cancelling at least two days of campaigning in California.

The ONLY reason the campaign gave up the pneumonia diagnosis was because without some good reason for her slumping at the memorial event, the public (read Trump) would have immediately assumed it was connected to the incident in December 2012 when she fell and suffered a concussion which Bill Clinton later claimed "it took six months to get over," according to ABC News.

Prior to her collapsing at the 9/11 event I thought that Trump's focus on Clinton's health was another one of his political ploys: "Say something ugly enough, often enough, and people will talk about it."

That, remember, came on the heels of the information that the doctor who wrote the short note about Trump's fantastically, excellent health looked like he was trying out for the Jeff Bridges role in a remake of "The Big Lebowski."

In his assessment, Dr. Harold Bornstein wrote: "If elected, Mr. Trump, I can state unequivocally, will be the healthiest individual ever elected to the presidency."

When asked about that, Bornstein admitted he wrote the assessment in about five minutes, and felt he was under great pressure because a limo, sent by the campaign, was waiting downstairs to take this Bill of Health back to Trump Tower.

In typical Trump fashion he immediately deflected and questioned Clinton's health and stamina in almost every speech and every appearance.

There is a theory in college sports that if your basketball or football team is going to lose a game, 'tis better to have lost early in the season. If you lost that same game, late in the season, it is fresh in the minds of the people who draw up the rankings.

There is a reason the phrase "October Surprise" exists in politics. There is not much time to fix a mistake in October (or mid-September). There is no such thing as an "April Surprise" because it would not likely have the same effect in November.