Rich Galen
|
Posted: Jan 15, 2016 10:21 AM
Share   Tweet
The opinions expressed by columnists are their own and do not necessarily represent the views of Townhall.com. 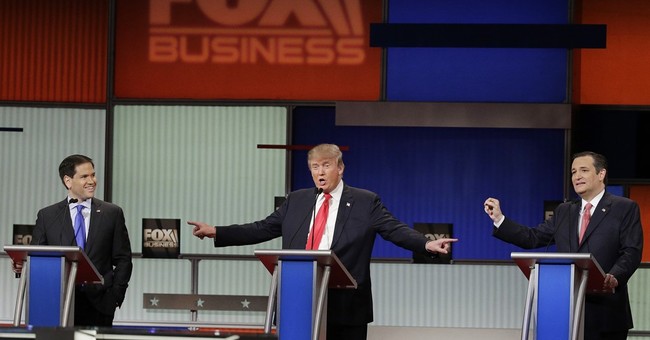 The toughest debates are the ones early in the cycle. By the time you get to the sixth, as the GOP candidates did last night, it gets a lot easier.

The leaders still hate them because things can go wrong. But the trailers, while not exactly looking forward to them, see them as a chance to make a move.

As The Lad, Reed Galen, said on NBC Nightly News prior to the debate:

"There are really two contests: Donald Trump and Ted Cruz will make all the headlines, but its really the establishment guys [Christie, Bush, and Kasich] that have to start making their moves."

Early on in the campaign cycle, John Kasich and Carly Fiorina made the most of debates. They were largely unknown to the public-at-large and were surprisingly well prepared and cogent.

But, as the debates moved along, Kasich and Fiorina lost the surprise factor and had to (a) hold their own against their opponents on the stage and, (b) figure out some way to keep the momentum going in between debates.

In the NBC/Wall Street Journal poll that was released just hours before the debate, Kasich and Fiorina (along with Rand Paul) were tied at three percent.

In that national poll, Donald Trump widened his lead over Ted Cruz 33-20. In third place was Marco Rubio at 13 essentially tied with Ben Carson at 12. Chris Christie and Jeb Bush came in at five each, with Mike Huckabee at one and Rick Santorum not even reaching the 1 percent threshold.

As we keep pointing out, there is a not a national primary. Iowans will go to their firehouses, churches and school gymnasiums on February 1 and that will kick off the three (or so) month sprint.

So. How'd they do? Here's the summary of where they are and how they did: Helped themselves, Went Sideways, or Hurt Themselves.

Donald Trump Trump has not just defied political gravity by staying aloft; but he seems to be increasing his altitude. Maybe its because we've heard him so many times, but he sounded more reasonable last night in the early going. But, when he got into the question of Cruz' citizenship he began ranting, reverted to type and was difficult to listen to.

When asked about Gov. Nikki Haley's remark that Republicans should avoid angry words - obviously referring to Trump - Trump's response was "she was right. I am angry at the way this government is being run."

When asked whether he wanted to retract his statement about not admitting Muslims he said, "No" and then went on to explain why.

That's why he's doing so well: What others would attempt to wriggle out of, Trump uses as a positive.

Ted Cruz Cruz has been thrown off message twice within two weeks. First, when Trump suggested his Canadian birth (of an American mother) might disqualify him from serving. Then, on Wednesday the New York Times ran a front-page above-the-fold story about Cruz having borrowed about $1 million for his Senate race but not reporting it on campaign documents (He did report the loans on his personal finance reports). Nevertheless, Cruz is doing well in Iowa - essentially tied with Trump.

Cruz is an excellent debater and came out of the gate with confidence and efficiency. He answered the loan filing question easily and turned it around to an attack on the New York Times which played well among a GOP audience in South Carolina. When Cruz was asked about the birth issue, he was prepared for it and answered it well.

Cruz understood he needed to engage Trump, from which Trump did not shy. On the "New York Values" issue, Trump was ready by invoking the Twin Towers and the rebuilding of lower Manhattan.

Marco Rubio Rubio appears to be stuck in place. He's not dropping in the polling, but neither is he closing the gap with the two leaders. He used the debate last night to attempt to relight the fire that was under his campaign until recently. He knew he needed to show passion and he did it well. Rubio is good in this setting and used his skill to great effect. His riff on gun control was as strong a 90 seconds as we've seen in any debate so far.

Caught betwixt the top two and the bottom four, Rubio is in a very difficult position strategically. While trying to batter his way to get next to the leaders, he has to fend off attacks from those behind him.

Ben Carson The only news Carson is making are the seemingly constant staff changes among senior members of his campaign. Never a good way to spend the better part of a month. Carson spoke with significantly more energy than he has in previous debates. His answer on changing the tone, not of the campaign, but of conversation in America among Americans was strong and well received.

When he speaks like a teacher, he's very good. It's substantive issues that have cause him problems. Carson's answer on Syria sounded like something written by a 10th graders for a social studies paper.

Chris Christie Christie is an also-ran in Iowa but is a serious player in New Hampshire. He needs to stay in the conversation until February 9, when New Hampshire votes.

Christie is very comfortable on the debate stage and showed used his talents to great effect. When Rubio went after him, Christie turned the tables and more than batted Rubio's complaints aside and turned them into a positive.

Christie speaks in bursts that make my eyes widen with interest, but then I forget what he said.

Jeb Bush Was at the edge of the stage in this debate which tells you everything you need to know about the state of the Bush campaign as of today. Bush is the best example of growth in the modern debate setting. The best line in the first part of the debate was Bush's suggestion that if Hillary Clinton were to be elected her first 100 days would be "going between the White House and the court house." Throughout the debate, Bush's confidence last night was light years from the stumbling answers he gave in the first two debates.

John Kasich Like Christie is not looking to do terribly well in Iowa, but he is surging in New Hampshire sitting in third right behind Marco Rubio, but Trump has a large lead over the field there.

Kasich knows his stuff on economics: Lower taxes, fewer regulations, and control spending. He was a strong Chairman of the House Budget Committee and, in spite of serious opposition from within his own party, has done a good job in Ohio.

As the debate went into the end of its second hour tempers got a little warmer. As the clock ticked past 11 Eastern Time it wandered into Cruz and Rubio saying each was lying about the other's Senate record which was impossible to follow.