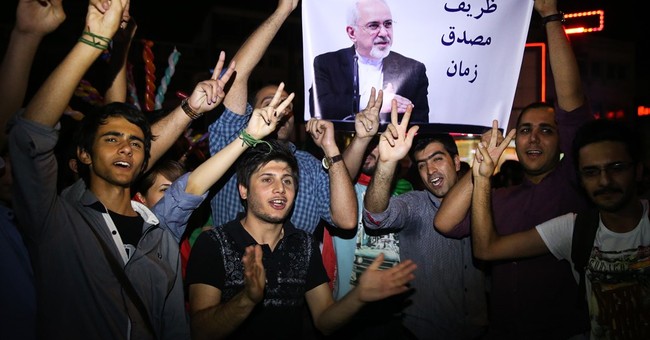 I could have written a column about the reaction to a deal with Iran five months ago and I wouldn't have missed by much:

Republicans are furious. Democrats are wary. The Obama Administration is taking, not a victory lap, but running a victory marathon.

Here's what I don't know about the Iran deal: Everything.

No one who raced to get in front of a camera on Tuesday had read the text of the agreement(s). And, because of the nature of these things, there are secret appendices and side agreements that we may never know.

So, it is quite likely that the people solemnly proclaiming their opposition, or carefully walking a fine line before whispering their support, don't know what is in there, either.

Let's take a look at some of the concepts.

That supposes they haven't been cheating all the way through this thing. OF COURSE THEY'VE BEEN CHEATING. So, the real question is: Will they cheat more?

In order to cheat by buying whatever it takes to make an atomic bomb out of uranium rocks, someone has to be willing to sell it to them. Whether that's high speed centrifuges, or ball bearings, or Slinky toys …

… they have to buy them from somewhere. It's like a bribe. In order to take a bribe someone has to offer a bribe.

When the crack international investigating teams show up at Tehran Imam Khomeini International Airport (code IKA for those who are booking their own tickets), they will be greeted with great ceremony and allowed to go anywhere they want except for the places the Iranian government does not want them to go.

We've seen this before. The teams do not generally have heavy artillery or air cover, so if the Army says "You can't go there," you don't. You file reports and publicly complain. The UN or whomever, will vigorously debate a resolution that will take 18 months to pass. And the next President of the United States will threaten to put the sanctions back in place.

Let's talk about those sanctions.

Unless you are an international oil trader, you are more interested in what it takes to fill the tank of your car. According to AAA, the average price for a gallon of regular gasoline was about $2.78. A year ago it was $3.60.

All that to say: If you're advising the new President - either Joe Biden or George Pataki - are you going to recommend a policy that adds 80 cents per gallon to the average middle class working family your boss tried to hard to pretend he cared so much about?

Similarly, the governments of France or Germany or Luxembourg are not selling stuff to Iranians. Companies that reside in those nations are selling stuff and for sanctions to be slapped back on means those companies will lose a potentially large market and with the EU economy not exactly roaring, European governments are likely to be as happy about renewing sanctions on Iran as you would be adding a buck a gallon to fill your car.

As I said. I could have written this column five months ago.