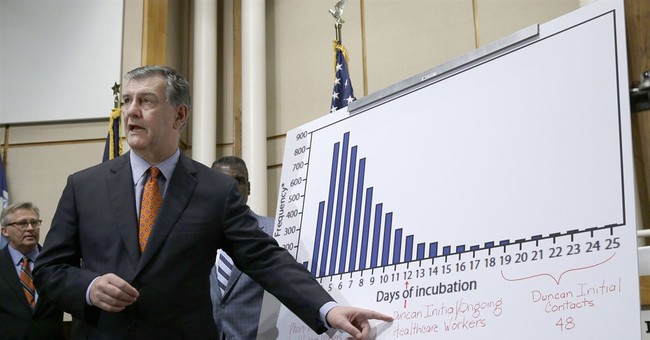 The growing concern over the possible spread of Ebola in the United States is Barack Obama's equivalent of George W. Bush's Katrina problems.

Bush didn't ask for a hurricane to hit the Gulf Coast and cause the New Orleans levees to overflow. Obama didn't ask for an Ebola outbreak in western Africa to show up on U.S. soil.

In the aftermath of Katrina, President Bush - after getting criticized for flying over the flooded city in Air Force One - came back, put his arm around the head of the Federal Emergency Management Agency, Michael Brown, and as the city was awash in 20 feet of sea water, sewage, and over 1,800 fatalities said, "Brownie, you're doing a heck of a job."

Brownie was, in fact, not doing a heck of a job, or anything even close and FEMA (a unit of the Department of Homeland Security) became a national joke.

President Obama's FEMA is the CDC - the Centers for Disease Control and Prevention (a subset of the Department of Health and Human Services).

The head of that organization is named Dr. Tom Frieden, MD. As of this writing, President Obama has not put his arm around him saying, "Freedie, you're doing a heck of a job" or anything like it.

Frieden has offered incomprehensible advice such as, as Investor's Business Daily reported:

"In a telephone press briefing, the CDC director repeated that you can't get Ebola by sitting next to someone on a bus, but infected or exposed people should avoid public transit because they might transmit it."

Frieden first blamed the two nurses who have contracted Ebola in Dallas for having "breached protocol" only to find that (a) the hospital's protocols were all but non-existent and, in any event, (b) the CDC announced over the weekend a list of revised protocols including "Use of a model of hood that protects health care worker's neck so the neck will not be exposed."

This was after the CDC did not dissuade the second of the nurses to fly on a commercial airliner from Dallas to Cleveland and back.

After assuring Americans that there was virtually no chance of Ebola becoming a problem in the U.S., CNN's Barbara Starr reported that Obama Administration has admitted that"

"The U.S. military is forming a 30-person "quick-strike team" equipped to provide direct treatment to Ebola patients inside the United States."

The President (as of Sunday night) was still resisting a growing clamor to at least deny visas to people from affected countries in Africa after another series of incomprehensible explanations as to why a travel ban would put the U.S. in more peril.

According to The Hill newspaper, here is a list of Democrats who (as of Sunday) have called for a temporary travel ban:

A running betting line has emerged on Twitter as to the date when the President will reverse himself on the travel ban.

The CDC isn't the only entity that is now held in, as Winston Churchill once said, "Minimum high regard." Again, not the President's fault but on his watch, the Secret Service has been caught with its agents drunk, passed out in hotel lobbies, leaving bullets in the hotel rooms of women they were visiting, ignoring rifle shots into the window outside the Family Quarters in the White House and, the latest outrage, failing to stop a guy loping across the lawn, running into the White House, finding himself in the East Room and all but taking a selfie of himself to post on Instagram.

If, as expected, Democrats lose control of the U.S. Senate two weeks from tomorrow, look for the finger of the unhappy Left to point directly at the Oval office. President Obama is not turning down invitations to show up at high-visibility U.S. Senate campaigns. He isn't being invited in the first place.

To date only one person has died of Ebola on U.S. soil, but the issue is not the size of outbreak.

There is a continuing, growing, lack of confidence in public institutions of which Obama is Constitutionally, legally, and politically the leader.

"If you like your plan, you can keep your plan" may be a footnote to the Obama legacy. It is likely that "Ebola" will be a chapter header.