In Ways Only America Can Do 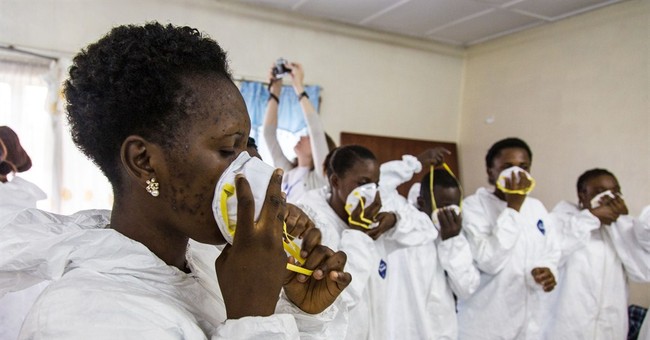 President Barack Obama spoke about the Ebola outbreak in west Africa during a visit to the Centers for Disease Control and Prevention last week:

"Faced with this outbreak, the world is looking to us, the United States. And it's a responsibility that we embrace."

Thought about that phrase: "that only America can do," and wondered why "only America" can do it.

Anyone who has traveled in Africa sees ample evidence of the amount of business China does with African nations especially in huge construction and infrastructure projects.

Closer to the problem, Africa, made up of 62 nations and territories has an estimated aggregate population of 1.069 billion - the second most populous continent in the world (according to the World Population Statistics webpage).

So, why does the United States, alone, possess the "kinds of capabilities" that can be brought to bear on an epidemic that, left alone, could infect 500,000 by the end of January (just 3 months away) and with a mortality rate of about 50 percent, 250,000 deaths?

The answer is: We are good at this kind of thing.

The list goes on and on and has nothing to do with drones or smart bombs.

I hesitate to use the phrase "American Exceptionalism" because that smacks of the kind of breast-beating that keeps the New York Yankees, for millions of baseball fans, at the top of the list as the team they love to see lose.

In 2001, shortly after George W. Bush was sworn in as President, the United Nations Human Rights Commission declined to re-elect the United States to the seat they had occupied since 1947.

That was widely seen as a slap in the face to President Bush because the Commission saw fit to elect such stalwarts of human rights as Sudan and Uganda.

After a year of the Commission drifting aimlessly, they decided to add seats including one that would always be occupied by either the U.S. or Canada.

Prior to that election, the LA Times reported in 2002 that:

"At the recent Human Rights Commission session in Geneva, the group declined to discuss reported repression in China, tempered criticism of Russian abuses in Chechnya and agreed to end human rights investigations in Iran."

I was at an "airbase in Southwest Asia" in 2004 when the Iranian earthquake hit the city of Bam. Air Force personnel quickly assembled relief supplies to be shipped via C-130s to the affected area. In Iran. With whom we have had no diplomatic relations since 1980.

I asked if I could go along and was told - gently - that they could either take another 150 lbs of supplies, or me.

I didn't go. I did my bit to further what "only America can do."

The President is planning to send as many as 3,000 troops to West Africa to help control Ebola. However, the Agency France-Presse reported that the troops will not be near infected patients but will be

"focused on training health workers in the country and setting up facilities to help West African countries tackle the crisis. The troops will carry protective gear but 'there's no intent right now for them to have direct contact with patients,' a spokesman said."

In the 1996 film "Independence Day" an American fighter squadron learns how to defeat the alien spacecraft. When the word is sent to fighting forces around the world, a runner comes up to a British officer and says, effectively, "The Americans have figured out how to defeat them."

To which the British officer responds: "About bloody time."

"…in ways that only America can do."