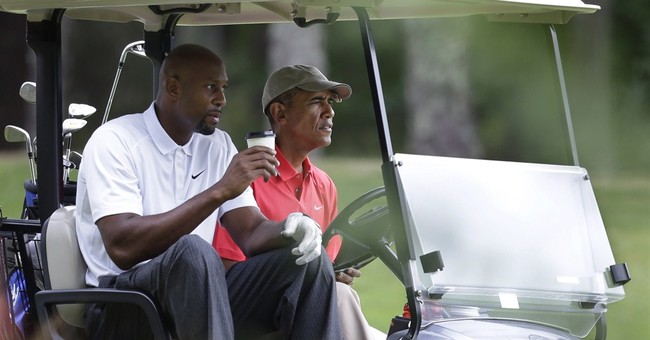 The Washington Post runs a little item every Friday entitled: "Who Had the Worst Week in Washington?"

Sometimes it's a sports figure (The Washington Nationals won in June 2013 when they were 29-30) .

Sometimes someone in the media (David Gregory recently won after being fired from Meet the Press).

The column, like so many on and off the record; Republican and Democrat, pointed to his astonishing lack of political insight he demonstrated by going directly from a statement about the death of reporter James Foley to the golf course.

The Post ran a photo atop the column of the President sitting in a golf cart, laughing heartedly. Although there was nothing in the caption to indicate it was taken right after his statement about Foley, that was certainly the impression it left.

The groans from both sides became so loud that the New York Times quoted White House Communications Director, Jennifer Palmieri as saying: "His concern for the Foleys and Jim was evident to all who saw and heard his statement."

The Times, by the way, used the same laughing-in-the-golf-cart photo as the Washington Post.

According to Politco.com (which used a different golfing photo), White House Deputy Press Secretary Eric Schultz was trotted out to say, "sports and leisure activities are a good release and clearing of the mind."

Which led me to Tweet (@richgalen) "Political Rule: If you have to explain it, you've lost."

That wasn't all. Maureen Dowd, Pulitzer Prize-winning columnist for the NY Times, wrote a brilliant parody of Lincoln's Gettysburg Address which began

Cranky (Another Week Before School Starts)

Getting back to Ms. Dowd's column ? which began: "FORE! Score? And seven trillion rounds ago, our forecaddies brought forth on this continent a new playground, conceived by Robert Trent Jones, and dedicated to the proposition that all men are created equal when it comes to spending as much time on the links as possible."

Which is yet another reason why Ms. Dowd has won a Pulitzer and I have gotten in trouble for forgetting to pick up oregano at the Safeway.

The current term for what was wrong with the nine rounds of golf the President played over the past two weeks is: Optics.

It's not so much what he did, it is how it looks to the rest of the American population, the overwhelming percentage of whom wouldn't be able to pick Martha's Vineyard out on a map of the U.S. much less be able to afford to vacation there.

Ok. Ok. Maybe it's not so much how it looks to the rest of the American population. It's how it looks to those of us who have been stuck in Washington, DC (and its former-swampland environs) for most of August and for whom a return trip to the Safeway for oregano is our vacation.

With Members of the House and Senate largely stuck visiting with their constituents during their five week recess, the President's vacation has

--(If Republican) given them something to add to their speech at the start of the tractor pull at the county fair, or

-- (If Democrat) provided yet something else to have to explain about the President who remains stuck in the low 40s in the polls.

The thing about the Worse Week award is that there doesn't appear to be much on the horizon that will make next week, nor the weeks following to be much better.

ISIS, has taken control of an airport in Syria meaning the pressure on President Obama to expand the field into that country may be overwhelming. The Russians are increasing their pressure on the boarders of Ukraine. The grand jury will have to issue a report in Ferguson at some point.

And, as MSNBC reported last week: "The recovery is tepid and fragile, and the improving jobs picture still has a ways to go."

Think about all the times you've said "I need a vacation after my vacation."

Then think about Mr. Obama's week.

On the Secret Decoder Ring page today: Links to the "Worst Week" column, to the NY Times piece on the President's golfing after his Foley remarks, to Politico's coverage of the WH explanation and to Maureen Dowd's column.

Also, the Mullfoto is from the men's room in a restaurant in Old Town Alexandria, Va.