The Big Lesson of D-Day 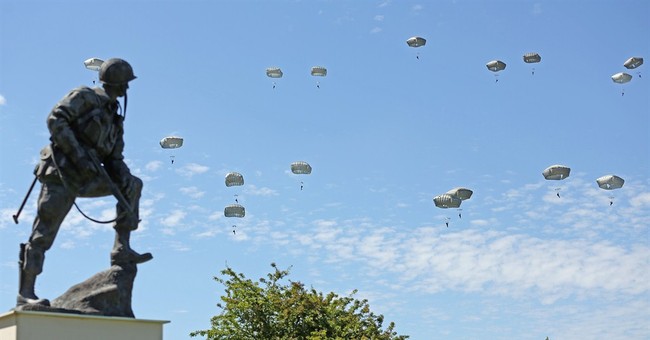 Depending upon how much time you might have spent watching one of the History/Military/Smithsonian channels over the past few days, you know that D-Day was far from a perfectly designed plan, flawlessly executed.

As military planners have known forever; a plan will begin to fall apart just about the time the first attacker meets the first defender.

But, plans have to be made so that participants will understand what was supposed to have happened and they can adjust from that point.

Back at home, just about just about every American in every every village and town was in the war. Whether participating in a scrap iron drive, or suffering (with varying degrees of equanimity) with ration coupons for everything from gasoline to condensed milk, American civilians were called upon to help the war effort.

Dwight Eisenhower, the senior American commander in Europe devoted enormous resources to convince the Germans that the invasion would come at Pas de Calais or even Norway and not at Normandy (Operation Fortitude).

Eisenhower used Lt. Gen. George Patton as the decoy building a fake army around him complete with rubber airplanes and tanks, as well as simulated radio traffic to help the Germans believe what they wanted to believe: That Patton would lead the invasion.

At Normandy attacking the beaches was a nearly impossible task. At low tide - necessary so the landing craft could navigate around otherwise submerged obstacles - there was about 300 yards of open beach to be crossed at Omaha.

For those in Washington, DC, that's a little shy of two downtown city blocks. Think about running down the middle of the street from Connecticut Avenue up L Street just about to 19th Street. In sand. In a wet uniform. With machine gunners trying to kill you.

And that was just to get to the sea wall, not beyond the pill boxes.

After enough bodies were thrown against the German defenders the attackers got beyond the Nazi Atlantic Wall and went on to fight through the Norman hedgerow country. Depending upon who is counting, there were some 9,000 casualties among the Allies and, according to Canadian historian Col. C.P. Stacey, that number included about 3,000 deaths.

It was worse on the other side of the world. According to the U.S. Navy's history of the Battle of Iwo Jima:

For those who think that June 6, 1944 to V-E Day was about 10 minutes, consider this: The breakout at St. Lô - that opened the vast French plain to Allied forces - wasn't accomplished until late July. It took almost six weeks to slug the 21 miles from Omaha Beach.

From "Normandy, Battles that Changed the World,"

"Despite having landed about a million men and 177,000 vehicles in Normandy by July, their lodgment remained modest, extending inland for 25 miles at best but for little more than five miles in most places."

What kept the troops moving forward? For most of them, according to both contemporaneous and historical accounts, there were two reasons. First, it was their job. Second, if they didn't do it someone else - maybe their buddy fighting right next to them - would have to.

Stephen E. Ambrose noted in his book on D-Day that Americans were trained to have whoever was senior - a General Officer or a Corporal - take command and move the battle forward.

Back at Supreme Headquarters, Eisenhower had uttered the three words, "Ok, let's go" that set Operation Overlord in action. He distributed a letter the night before the invasion that began:

"You are about to embark upon the Great Crusade toward which we have striven these many months."

"Good luck! And let us all beseech the blessings of Almighty God upon this great and noble undertaking."

But that wasn't the message that impresses me most. It was a message was never delivered. Eisenhower kept it in his pocket in case the invasion failed and the troops had to be withdrawn. It ended with:

"If any blame or fault attaches to the attempt, it is mine alone."

The big lesson of D-Day is that leadership means taking responsibility. Whether a mother telling her kids not to waste food, to a soldier leading an attack, to a sailor trying to maneuver through high seas and racing tides, to the Supreme Commander of the Allied Expeditionary Force.

"If any blame or fault attaches to the attempt, it is mine alone."