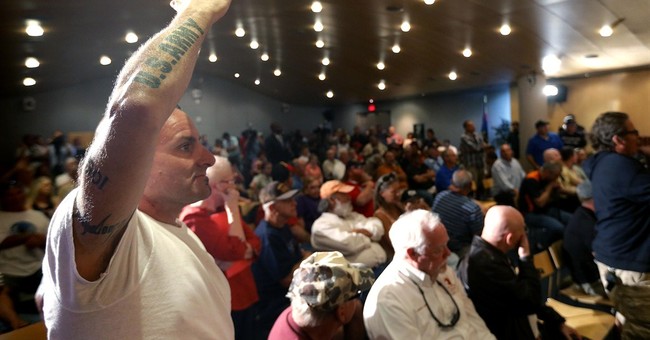 I drove down to Ft. Bragg, North Carolina to attend the retirement ceremony of Colonel Mike Ceroli.

I have written about Col. Ceroli before - including from Iraq where we first met more than 10 years ago. He was the commander of the Psychological Operations battalion while I was there.

The ceremony on Friday was at the John F. Kennedy Special Warfare center of which PsyOps (now referred to as Military Information Support Operations - MISO) is a component.

This was not my first trip to Ft. Bragg. I once spent the better part of 10 weeks there back in the late 1960's when I went through basic training there.

In my early days in Iraq I had to go to a place called Ramadi which, at the time, was under the control of the 82nd Airborne Division which is based at … Ft. Bragg.

When I was there some of the young soldiers asked if I had military experience. I said that I did; a combined six years in the New Jersey and Ohio National Guard.

Then, as young soldiers will do, they asked where I had "taken basic;" where I had gone through basic training.

Their BS antennae went sky high because there are no basic training operations at Ft. Bragg, so how could I have …

"But remember," I continued, "this was when gas lamps provided the majority of interior light and mules were the principal form of transportation."

I am proud of my friendship with Mike Ceroli as I am with the many other brave men and women who allowed me to stand in their collective shadows during my time in Iraq.

Some years ago, I gave a speech across the Potomac River from Mullings World HQ to units of the 89th Airlift Wing at Joint Base Andrews. I told them that when I was in the National Guard - at the height of domestic turmoil over the Vietnam war - some of my colleagues chose to wear civilian clothes to and from drills rather than put up with dirty looks - or worse - from Americans who otherwise would have seen them in their military uniforms.

I told them that, largely due to the high level of their participation in an all-volunteer military, Americans saw active duty service members in a completely different, and completely appropriate, light.

Except, it seems for the leadership of the Department of Veterans Affairs.

The Veterans Administration became a full-blown cabinet department on March 15, 1989 - just beyond 25 years ago. At the time, President George H.W. Bush, a veteran of World War II, said:

"There is only one place for the veterans of America, in the Cabinet Room, at the table with the President of the United States of America."

Now we are told that at least one Medical Center in the VA system has been maintaining secret scheduling lists of when Veterans would be called to be able to schedule a first meeting with a medical professional within the hospital.

The Arizona Republic quoted a program analyst as explaining:

"When their appointment was created, (it) can be 14 days out, but we're making them wait 6-20 weeks to create that appointment."

As many as 40 veterans may have died waiting for their first appointment with a primary care professional.

It should not come as a surprise to the Department of Veterans Affairs that a hospital in Arizona would have a large number of veterans asking for services. Arizona is, I think it is fair to say, well known as a major center for retired civilians and military.

The Secretary of Veterans Affairs, Eric Shinseki, told CBS news that the scandal in Phoenix, "makes me angry."

Makes him angry? It should make him gone.

Maybe this level of disengagement by Cabinet Secretaries has been the norm throughout both Republican and Democratic Administrations. But, Shinseki's being wholly unaware of this situation - in spite of numerous complaints to the VA's Office of Inspector General - hints at willful ignorance, not just dreadful management.

Sort of like HHS Secretary Kathleen Sebelius' never having thought to ask whether the Obamacare computer systems would be ready to go once the switch was thrown last October.

We owe the Mike Ceroli's and all of the retired service members a great deal. At a minimum we owe them access to the basic medical care they have been promised for, in his case, his 30 years in uniform.

If what we have been told about the level of service at the Phoenix, Arizona Veterans Affairs Medical Center is true, then America is failing all of its Veterans.

On the Secret Decoder Ring page today: Links to a discussion of PsyOps, to the 89th Air Wing, and to the timeline of the Arizona VA hospital mess.