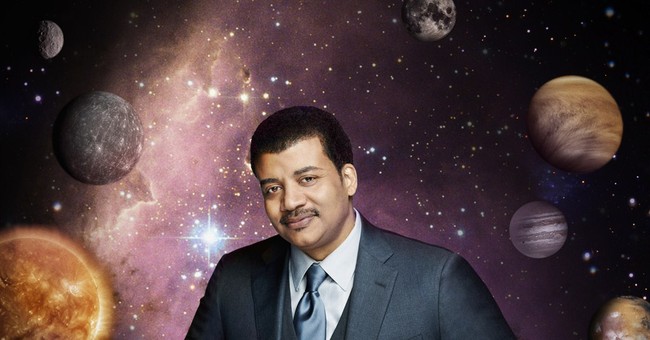 Can we take a day off from Ukraine and CPAC and missing airliners to celebrate something very special? It's the need for most of us to want to learn new things; and for being blessed by having a few people who know about those things and, more important, know how to explain them to the rest of us.

A re-booted version of the fabulously successful 80s program about space, "Cosmos; A Personal Journey," which was hosted by the late Dr. Carl Sagan (pronounced SAY-gun) premiered jointly last night on all 10 20th Century Fox networks including the National Geographic Channel, FX, and Fox (the one that features the NFL).

The original "Cosmos" (which was the most popular program in the history of PBS) gave us the phrase "star stuff" as in, "We're all made of star stuff." Dr. Sagan's odd speech pattern also gave us a new way to talk about the Federal budget back then when he leaned hard on the "b" in "Billions and Billions (although Sagan said the actual phrase was "Billions upon Billions."

"Cosmos" used the highest production values available in its time for Sagan to give us a new way of thinking about our world and our universe.

Sagan might not have been the best astronomer in his day, but he was certainly the best known. And he was no charlatan. He spent most of his career as a professor of astronomy and astrophysics at Cornell University until he died of bone cancer in 1996 at the age of 62.

Sagan is one of my scientific heroes; second only to physicist Richard Feynman (pronounced "FINE-man") winner of the Nobel Prize in Physics in 1965.

Dr. Feynman did a series of seven lectures, with exactly zero production values, also at Cornell University. I watched all seven about a year ago and it was one of those deals where, as I was watching, I understood what Feynman was saying, but as soon as the lecture was over I said to myself, "What was that again?"

One of my favorite Feynman stories - and I think I actually read this somewhere because I don't think I'm clever enough to have made it up - is about the time when, during the Q & A section of a lecture, he was asked if he thought we would ever invent an anti-gravity machine.

As I remember the story, Feynman said:

"Let's define what you mean. I assume you mean a machine that will lift you off the surface of the earth to a predetermined height; leave you there for a period of time of your choosing; then deliver you back to the surface unharmed."

The student agreed with that definition

"We already have that. It's called an elevator. Next question."

Both Feynman and Sagan had the gift of being able to explain complex scientific principals so even someone like me - who, as you know, is so mathematically challenged that all last year I thought I was 67 only to find out just prior to my birthday that I had been only 66 all that year.

The new version of "Cosmos" is hosted by a man who stands tall alongside Sagan and Feynman, Dr. Neil deGrasse Tyson. Dr. Tyson is the director of the Hayden Planetarium in New York City.

You've seen Dr. Tyson a million times, doing exactly what Sagan and Feynman did before him: Explain how we came to be and where we might be going in words and pictures that we can not just understand, but appreciate.

I am not going to draw grand conclusions about how, by better understanding the unfathomable scale of the cosmos we, should recognize how really small we are, but it does remind me of that great line delivered by Humphrey Bogart in "Casablanca"

"I'm no good at being noble, but it doesn't take much to see that the problems of three little people don't amount to a hill of beans in this crazy world."

Thanks to Feynman, Sagan and now Tyson for being great scientists and great teachers.