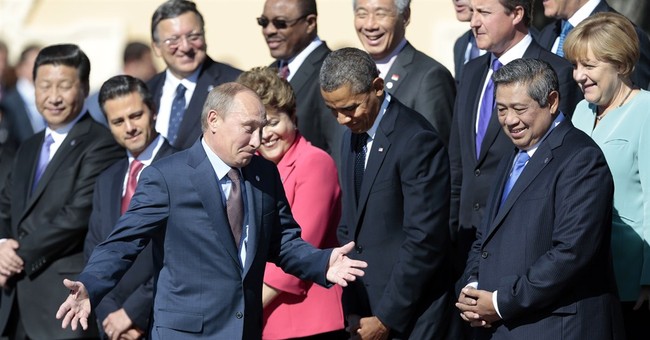 NOTE: This is being written on Tuesday afternoon - about six hours before President Obama's scheduled speech on Syria. We'll have a special edition of MULLINGS Wednesday to share thoughts on that.

President Barack Obama and Secretary of State John Kerry have successfully maneuvered us into a position where Syria and its strongest ally, Russia, have exclusive rights to determine how, what, where and when to deal with the chemical weapons that (a) Putin said there was no proof Assad ever used, and (b) Assad denies he has ever had.

This, in Washington, is seen by many as a victory for Obama.

But, on the 12th anniversary of the September 11, 2001 attacks on the United States, is a bitter pill for many Americans to have to swallow.

As one of the relatively few people reading this today to have spent any considerable amount of time in a war zone (even if I spent most of it cowering behind actual war fighters), I am not in favor of going to war just because the President said something dumb ("red line") or the Secretary of State said something even dumber ("incredibly small") .

I am also not in favor of going to war because the Secretary of Defense told a Congressional Committee that that U.S. had to continue to threaten to go to war against Syria to pressure Assad to accept international controls (supervised by Russia) over its chemical weapons stockpile (that Assad now admits to having).

Shorthand: We may have to go to war to avoid going to war.

That is strangely reminiscent of the infamous quote about B?n Tre, Vietnam in 1968 attributed to an unnamed US Army Major by the AP's Peter Arnett: "It became necessary to destroy the town to save it."

Maybe it's a Pentagon thing.

While all that's going on public support for the President's, the Secretary of State's and the Defense Secretary's position on Syria continues to erode.

While it is extremely dangerous to demand that foreign policy be conducted on the basis of public opinion polls, it is telling that since the Administration went all in on its PR effort to sell this war, overwhelming majorities are opposed for example:

A list of a dozen polls is available from RealClearPolitics.com.

What this means to the Congress is simple: With the Russian gambit, there is no reason to vote on a resolution giving the President support for attacking Syria - at least not now.

So like the budget deficit, the debt limit, an energy policy, a farm bill, and all the other unfinished and/or unfunded activities of the United States government, the Congress can kick Syria down the dune.

This gives Congress its favorite option: Doing nothing.

But, that takes us away from the principal issue surrounding this adventure: President Obama's non/mal/mis handling of foreign policy in general and the Arab world in particular.

When he assumed the office of President, Mr. Obama obviously believed that foreign leaders would be thrilled to deal with a sophisticated man such as himself after having to put up with the bluster of George W. Bush.

He even made it clear to the former President Dmitry Medvedev that following his re-election campaign Obama would have "more flexibility" in dealing with U.S.-Russian issues.

Mr. Obama, like so many others before him - and, alas, so many to follow - thought getting to the Oval Office was the tough part. It is only after sitting in it for any length of time they realize that running for a high position is far easier than serving in it.

Through a series of missteps and missed opportunities, the Arab Spring has wound down to leave North Africa and the Middle East just about where it was prior to the uprisings.

Egypt is under the control of a military Junta, and Syria's citizens are trapped in a dreadful civil war that has cost upwards of 100,000 lives and a displacement of more than two million people.

Now, however, it appears President Obama has, by virtue of being out-maneuvered by Vladimir Putin, decided to enter into his most dangerous game yet: