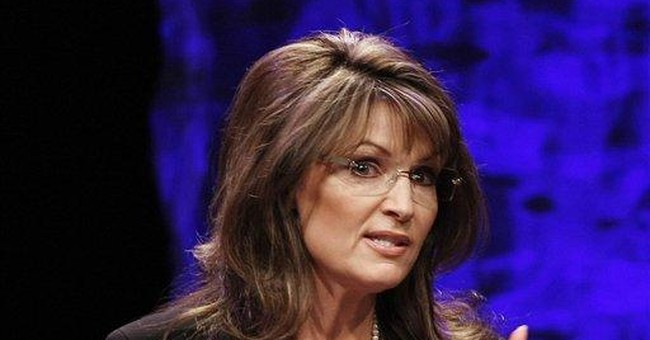 Trending
The State of Alaska dumped 13,000 emails - about 24,000 pages - generated during the brief period of Sarah Palin's gubernatorial career. Judging from the media scrum to get their hands on them, you might have thought Julian Assange himself had been put in charge of the release.

The emails were released as the result of a Freedom of Information Act (FOIA) request shortly after Palin had been selected as the running mate of Sen. John McCain. It took the Great State of Alaska about three years to get around to it.

The Washington Post, among other news organizations, were so eager to get to the bottom of what was hidden in this pile of - this potential treasure trove - that they put out a call, last Wednesday, for volunteers to come to the office and work cheek-by-jowl with actual reporters to tease out nuggets of gold from the boxes of lead.

I don't know if Post readers rolled their eyes and wondered aloud if the Post's newsroom had suffered an all-hands news judgment black-out, but the next day the Post revised its clarion call for volunteers, as Ryan Kellerman wrote in this update:

"We have had a strong response to our crowdsourcing call-out on the Palin e-mails. We've reconsidered our approach and now would like to invite comments and annotations from any interested readers.

"We'll be posting them here, and are inviting you to comment on the most interesting or most noteworthy sections. Please include page numbers and, where possible, a direct excerpt."

No telling how many people thought sitting in the newsroom, cafeteria, or where ever, going through someone else's emails was going to be fun. I'm willing to bet that the Post's lawyers decided that, inasmuch as the Post Company actually pays people to decide what is news and then write about it, having a gaggle of civilians roaming around the office making those kinds of decisions was, in fact, evidence of an all-hands news judgment black-out.

That, by the way, was the way the New York Times had decided to reach out to volunteer readers in the first place so the Post should have been doubly embarrassed.

I am not, as regular readers know, a Sarah Palin fan. But this level of excitement over her official emails struck me as very, very creepy.

Never mind that the unemployment rate jumped back up to 9.1 percent in May.

Never mind that recent economic data, according to a Morgan Stanley report, "suggest that the recovery in the US economy has paused."

Let's focus on the important things: -- Newt Gingrich's selection of jewelry stores and cruise lines; -- Anthony Weiner's selection of Twitter recipients; and -- The Alaskan government's selection of which of Sarah Palin's emails to release.

I am so ambivalent about these emails that I did something I can't remember having done before: I turned down an opportunity to be on TV to talk about them. For someone with an ego the size of Jupiter, that is no small thing.

I did, however, chat with a Post reporter on Saturday morning which resulted in this quote from me in yesterday's paper:

"I will be shocked when we get through the 24,000 pages if there is any nugget that adds anything other than proof to what people already know about her, which is that she's petty and vindictive against people she dislikes and charming to people she does like."

When I asked whether the reporter was embarrassed by the resources being devoted to this effort, she said that Palin might be a candidate for President and so this was important.

I asked whether there had been FOIA requests for the three other former Governors in the race: Romney (Massachusetts), Pawlenty (Minnesota), or Huntsman (Utah); or if there was one for a certain former State Senator, Barack Obama (Illinois)?

She said she didn't think so.