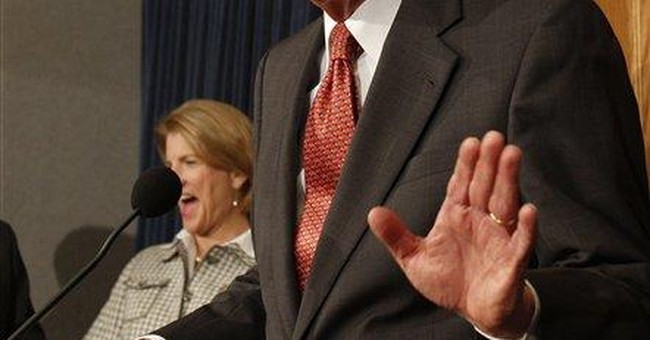 Here's all I'm going to say about Terry Jones and the Dove World Outreach Centre church in Gainesville, Florida: I'm glad he's backed off his threat to burn copies of the Quran.

It was rude, it was unseemly for someone who claims to be a religious leader, it would have done nothing more than give our enemies a reason to claim that America really is the "Great Satan" which I don't much care about, but why give them the opportunity?

Rev. Jones' ability to generate worldwide publicity from a church with only about 50 members will probably get him a reality show on some cable network.

Speaking of reality shows, Sarah Palin has decided to jump into the Republican Senate primary in Delaware by endorsing the Tea Party candidate against Rep. Mike Castle.

Palin is given credit (and correctly so) for breathing life into attorney Joe Miller's campaign to help him to a surprise win over Sen. Lisa Murkowski in the GOP primary in Alaska last week.

Second, Miller snuck up on Murkowski who didn't appear to take him seriously until it was too late. Castle is like a professional golfer watching another golfer putt on the same line: He gets to see the break of the ball.

Castle will not take Christine O'Donnell for granted and will probably be the next Senator from Delaware.

A couple of weeks ago I was doing a speech to an association and in the Q & A period someone asked me who the Republicans would nominate in 2012. I pointed out that in a poll of Democrats in June 2006 of the ten potential candidates who were named guess who wasn't one of them? Barack Obama. Didn't even show up.

So, anyone who thinks they know who the GOP nominee is going to be in 2012 is probably wrong.

A woman in the audience asked me about Sarah Palin. I said, then too, that I didn't think she would be the nominee.

"She brings people in, they want to hear her, and she creates excitement," the woman protested.

I said, "I agree with all of that. But that's also a pretty good definition Elvis Presley's popularity and he wasn't going to be President, either."

They paid me anyway.

The U.S. Marines boarded a ship of German registry in the Gulf of Aden on Thursday and took back control from the nine Somali pirates who had previously seized it.

According to the NY Times, the pirates are behind held aboard a U.S. Navy vessel even though:

While hundreds of Somali pirates have recently been sent to jail in Kenya, the Seychelles or Somalia … many more have been set free by Western navies in a controversial "catch and release" approach because of the complications of prosecuting suspects arrested on the high seas.

I am all for that "catch and release" business. Any pirate captured should be released immediately, directly into the Gulf of Aden.

Most of these attacks occur about 300 miles from shore. If a pirate can swim that far he would be, literally, home free.

Oh! I was wrong the other day when I said the Congress would be back to work this week, following the Labor Day holiday. I thought, surely, after six weeks at home with their constituents the Members of the House and Senate would be eager to get back to the safe haven of their Capitol offices and fawning staffs.

Silly me. They won't be back to trying to figure out how to save their jobs until next week.

Finally, the holy month of Ramadan is ending today with the festival of Eid al-Fitr. In 2010 that happens to coincide with the beginning of Rosh Hashanah, signaling the Jewish new year.

Happy Eid to my Muslim friends. Happy 5771 to my Jewish friends.