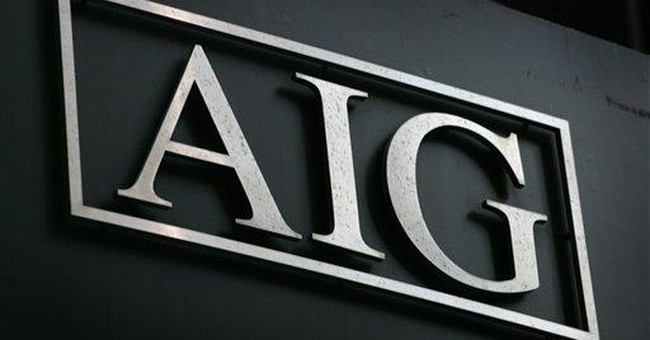 In World War II, when the world's political systems were collapsing, Operation Overlord was developed to invade Europe on June 6, 1944. The invasion at Normandy has since become known by the previously generic term of "D-Day."

While Operation Overlord included troops from many nations, it is an article of faith that without the U.S. it never would have been considered, much less attempted, much less successfully carried off.

When the world's financial system was collapsing in 2009, the many countries jumped in to pump money into the system so that when you put your card into your local bank's ATM, money would come out and that money could be used to buy stuff.

Again, without the full participation of the United States we would all be buying dinner from the Safeway with a combination of wampum and a promise to help shovel the parking lot during next winter's snows.

One of the more annoying bailouts by the U.S. Government was the decision to pump $173 Billion into the insurance company AIG so it could pay off all the insurance policies it had written on crappy mortgage packages.

I wrote a column about this last March and I will reprise the salient graf here:

We - you and I - send over $43 billion of our tax dollars to the Société Générale (France), Deutsche Bank (Germany), Barclays (England), HSBC (England), and the Royal Bank of Scotland because they had made bad bets and AIG, as their bookie, couldn't cover.

Alright, that was then, this is now. That money is gone, they never thanked us for it and we shouldn't expect to get a nice bouquet of flowers each Independence Day for the next two billion years in return.

But now, we find out we have to bail out Europe AGAIN! Greece, which you may remember I warned you about a month or so ago, was ready to collapse because the government kept giving its citizens benefits which it never collected the taxes to pay for.

As an example: Greek workers are paid for 14 months of work every year. Yep. Work 12 months, get paid for 14.

Here's a tip from a guy who attended a total of three classes the semester he flunked Econ 214 at Marietta College, Marietta, Ohio 45750: You cannot squeeze enough productivity out of the workforce to be able to pay for 14 months of work each year so long as each year remains 12 months long.

Sooner or later the system will collapse.

The later came sooner and it was about three weeks ago.

So, the European Union ponied up because Spain and Portugal are no better at controlling spending or collecting taxes and all those national banks kept buying the bonds of all those failing economies and if Greece couldn't make good on its debt payments then Spain wouldn't be able to make good and Portugal would fail, followed by Italy and Ireland.

All those same banks we bailed out last year would have to be bailed out again - for buying the junk bonds of their European neighbors - and guess who has to help out?

The taxpayers of the U.S. of A.

George Will pointed out in his excellent column that American taxpayers "provide the U.S. contribution of 17 percent of the assets of the International Monetary Fund, which is giving Greece $39 billion. The IMF also is contributing $321 billion to a "stabilization" fund for other Eurozone nations with debt problems."

Add the $61.2 billion in this bailout to the $43.25 billion we sent over last year in the AIG deal and it totals to about $104.5 billion that you and I have paid to keep Europe from collapsing on the petard of its own post-WWII Liberal social policies.

I know Europeans hate it when Americans remind them of all this. If they were serious they would tell us to butt out, but they never do.

At some point America is going to have to cut Europe loose. We're going off to play with China for the next 150-or-so years.