A Dark Cloud on the GOP Horizon 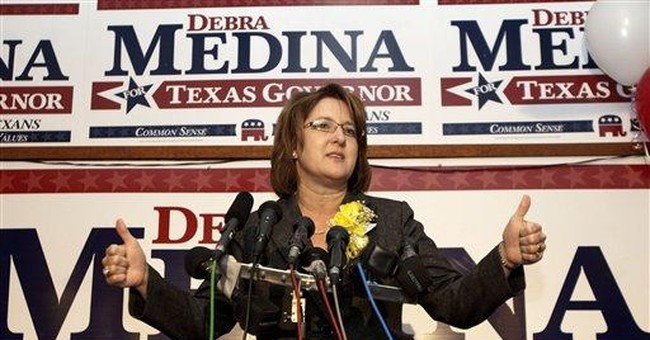 In Texas on Tuesday a little known woman named Debra Medina ran as the Tea Party candidate and got nearly 19 percent of the vote in the GOP primary for Governor.

Sen. Kay Bailey Hutchison got about 30 percent and Gov. Rick Perry got 51 percent meaning Medina was far closer to Hutchison than Hutchison was to Perry.

In this era of euphoria for the GOP, this result could well portend a huge problem next November.

Medina got about a fifth of the vote in a GOP primary. She would probably have gotten a far smaller percentage in a general election, but that's where I'm going with this.

Primary elections and other nominating processes will be pretty much done by August. A few states go into September, but not many. So, Republican and Democrat nominees will be chosen and running against each other by, for the most part, late summer.

Running head-to-head against the Republican nominee is going to be a steep hill to climb - Washington experience does not appear to be a big plus this year.

Most states have a process for an independent candidate to get on the ballot. It usually involves getting some number of signatures from some segment of the population in each county or some similar formula.

Someone is going to figure out that being the Tea Party candidate can get you a significant percentage of the vote, if you can get on the ballot.

Debra Medina got about the same percentage of the vote as Ross Perot got in the Presidential election of 1992. Perot didn't win any electoral votes, but he got enough popular votes to draw support away from George H.W. Bush and allowed Bill Clinton to win the state.

Another example. If Ralph Nader hadn't been on the Florida ballot no recount would have been necessary. Al Gore would have won the state fairly handily and would have been the 43rd President of the United States.

If Tea Party candidates can get on the ballot in close districts, they can easily do the same thing: Siphon votes away from the GOP candidate and throw the district to the Democrat.

Why would they do this? To demand that Republican candidates toe the Tea Party Line - or else.

In most states independents can gain ballot access well after the primary voting period, so they can make the threat stick: Come out against an ever-encroaching Federal government or the Tea Party candidate will get on the ballot and you can go back to your day job.

If I were advising the Democratic Congressional Campaign Committee, I would tell them to set aside a fund of money to teach Tea Party candidates how to gain ballot access in the 30 - 40 Districts which the Ds think are in most peril.

Republican challengers in Democrat districts can preempt that plot by claiming the Tea Party mantle starting, oh, tomorrow would be just about right.

The power of the Tea Baggers can be best used in weak Democratic districts where they can threaten to get on the ballot and destroy Republican chances to take back control of the U.S. House.

That is a dangerous storm bearing down on GOP hopes for November.