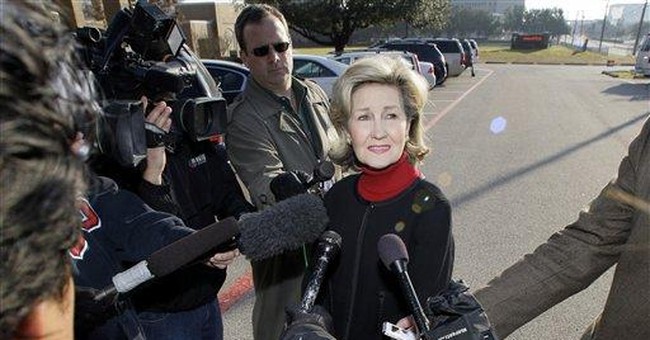 The biggest race of the night was between incumbent Republican Governor Rick Perry and Republican Senator Kay Bailey Hutchison.

Perry won. By a lot.

Long-time Mullsters know that I worked for Sen. Hutchison (who is known by friend and foe alike as KBH) for three months during the summer of 2008 and I remain a huge fan.

It has been clear for a number of weeks that Governor Perry would hold easily off Hutchison's challenge, but I came down to Dallas anyway. As I told one of Hutchison's advisors: "You need to show up even when the news might be bad; you can't just show up for the balloon drop."

The polls closed at seven. The early returns had Perry leading Hutchison about 52 percent to 32 percent. A couple of hours later, at about 9:30 Central, Sen. Hutchison addressed a small crowd made up of loyalists who hung around even when defeat was foretold, and conceded the race to Gov. Perry.

Under Texas law, if no candidate gets over 50 percent then there is a runoff. But it was clear even two hours into the counting, that Perry was going to be some 20 percentage points ahead of Hutchison, so she did the honorable thing and conceded outright. Even if the final tally shows Perry under the magic 50 percent; Hutchison was too far behind to be able to make up the ground in a run-off.

A young man stopped me and suggested that the vote totals might change and she should not concede. I said that in my experience, when the basic split between the candidates is static through a significant part of the counting; that split is likely to maintain.

I have been doing this for a long time.

The NY Times wrote, in an early edition, that Perry "had courted the Tea Party movement" from the get go, but Debra Medina was the Tea Party candidate and got about 18 percent of the votes.

That surprised me because very often people will say they are planning to vote for a third-party or protest candidate, but when it comes to actually punching out the chad, pulling the lever, or filling in the box; people decide that throwing their vote away on a candidate who cannot possibly win is not a good idea.

There are a lot of Republicans in Texas and about one in five of them who went to the polls yesterday voted for the Tea Party candidate.

I may have to rethink my position.

Perry's election night do was at one of the best barbecue places on the planet, the Salt Lick in a place called Driftwood, Texas.

I grew up on Long Island in New York. There is no town named "Driftwood" on Long Island. It's one of the many things I love about Texas.

The winner of the Democratic primary here was former Houston Mayor Bill White who will face Perry in the Fall. White will not be able to paint Perry as a Washington insider (as Perry did to Hutchison), and will have to make the case that Texas is suffering under Perry's leadership.

Ask KBH if that argument sells.

Texas' unemployment rate is about 8.3 percent compared to 9.7 percent nationally. That's not great, but it ain't Michigan.

Texas has no personal income tax but has a pretty high sales tax to make up for it. That means you are not punished for making money; but you are taxed on how much of it you choose to spend.

Hutchison's Senate term runs through 2012. Last night was not an appropriate time to ask her if she would serve out her term, but she needs to announce her decision soon so that the people in Texas who have been bobbing up and down in the political waters waiting to see when (or if) she would step down can plan their lives.

I hope KBH stays in the Senate. She works hard, makes people listen to her ideas, and is a great representative in Washington for the people of Texas.