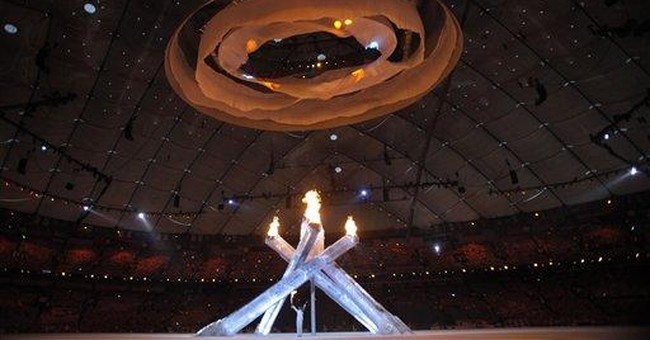 I thought Vancouver and NBC did a great job putting on and covering the XXIst Winter Olympics.

I know the weather was uncooperative and the opening ceremonies had glitches and, I assume, the buses didn't run on time and sometimes the beer was warm but, watching from my couch in Historic Old Town Alexandria, Virginia I thought they were just swell.

The only thing that kept the Olympics from being perfect is there were not 17 straight days of Women's Biathlon events. If they would have the women competing in the Super G sling rifles on their backs, that would be excellent on a number of levels (if-you-know-what-I-mean-and-I-think-you-do).

I watched the Women's figure skating because I think they are the absolutely perfect combination of grace and athleticism. The three young women who won, deserved to win. Yu-Na Kim (South Korea, Gold) and Mao Asada (Japan, Silver) are only 19. The winner of the bronze medal was 24-year-old Joannie Rochette lost her mom to a heart attack earlier in the week, but skated, skated beautifully, and won a medal.

For long-time MULLINGS readers you know that I cry at coffee commercials at Christmas, so every time someone recounted the story of Miss Rochette I cried.

She carried the home-town flag - the Canadian flag - into the stadium for the closing ceremonies and I didn't just cry … I sobbed.

The final event was the Gold Medal Hockey Game which was between the USA and Canada. The other day I wrote that I hoped we wiped the ice up with the Canadians, but I was just pretending to be macho.

Hockey is the home sport of Canada and they reeeeeeeely wanted to win the Gold. Last weekend a pretty young USA team (every player on both teams are NHL professionals) beat the Canadian team and that set up a really great final.

The Canadians broke to a two-zip lead. The US team fought back to make it 2-1 after two periods. Then, with only 24 seconds left in the third period, the US tied the score.

In the end the Canadians joined their female colleagues (who had won the Gold a few days earlier) by winning overtime.

Men's hockey was the final event and I thought that was a fitting end to a fun games.

That said, I have some technical questions. The USA team won Gold in the Four-Man Bobsled event for the first time since 1375.

I understand what the driver does - he steers the sled.

I understand what the brakeman does - he keeps his hands off the brakes until they get to the bottom.

I'm not exactly certain what the numbers two and three guys do. If their duties include wetting the bottom of the sled when you realize you're going 95 miles-per-hour down an ice-tube, then I think I'm well qualified.

My favorite quote - because it is has so many existential overtones - comes from the Gold Medalist in the Men's Half-Pipe, Shaun White.

Anyway, after he won the Gold he was so taken by the moment that, when asked for an interview, he said:

"I can't even talk right now. Know what I'm saying?"

Which ranks right up there with my favorite Government Printing Office weirdness:

The closing ceremonies of the Vancouver games ended with a passing of the torch - so to speak - to the host city of the 2014 games, Sochi, Russia. A chorus from Moscow took the stage and sang the same song that the crew on the Red October sang which, I now realize, is the Russian national anthem.

When it comes to being a man o' the world, I am the number three man in the four man bobsled of life.