Because It's Such a Good Idea 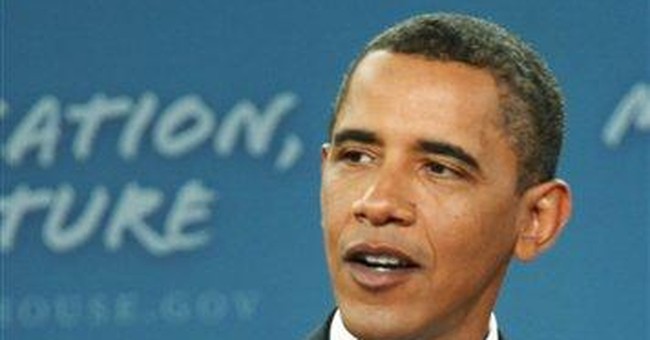 In the run up to his speech before a Joint Session of Congress tonight, President Barack Obama had a meeting with House Speaker Nancy Pelosi (D-Ca) and Senate Majority Leader Harry Reid (D-Nev) at the White House. After the meeting, as is the custom, they came out to speak to reporters.

Harry Reid had said "We're still approaching this in the form of bipartisanship. We want a bipartisan bill."

None of the reporters laughed out loud, but one did ask "Why was there no place for Republicans at the table today at this meeting?"

Reid fumbled the answer so Pelosi stepped in and said, "He has other meetings that we are not invited to that Republicans are at" which is at once dreadful grammar and not true.

But, the biggest whopper she told was suggesting that Republicans were involved in the three bills which have come out of the Education and Labor; Ways and Means; and, Energy and Commerce committees.

She said "All of them have strong numbers of Republicans on those Committees. I saw to that when we did our ratios. So they had a place at the table as our bills had come through the legislative process."

I checked, via e-mail, with the chief of staff of the House Republican Conference, Marc Short, about how many of the 57 Republicans who are members of those committees actually voted for any of the three bills.

"None" was the one word answer.

Pelosi insists there must be a "public option" for a bill to come out of the House of Representatives but Harry Reid was not so sure about the Senate, saying, "We're going to do our very best to have a public option or something like a public option before we finish this work."

The President will be delivering his speech to the Congress tonight because that's the only way the White House can get network coverage. As the Fall TV season is about to open, no network would have given up an hour of prime time revenue for yet another press conference nor for an oval office speech.

A Joint Session speech is unique so, according to Media Life Magazine:

ABC, CBS and NBC will carry the live speech, as will the Big Three cable news networks, including Fox News Channel. Fox will advise viewers who want to watch the president's address to tune in to FNC.

But there is only one of those arrows in Obama's quiver so it is evidence of how far his health care initiative has fallen that the only way to get the country's attention is to use the Joint Session card.

On CNN yesterday, Rick Sanchez asked me what my advice would be to Obama if I were asked. I said I would tell him to invoke the name of Ted Kennedy who was so successful as a Senator because he would take what he could get, when he could get it and then work to expand whatever "it" was in the next Congress and the next one after that until he got what he wanted in the first place.

Obama should take whatever the Senate will give him and then try to expand it after the 2010 midterm elections. He won't, but that's what he should do.

On the issue of the "public option" here's my suggestion:

Every Republican Member of the House and Senate should commit to supporting an amendment to whatever bill comes to the floor stating, in essence, "All civilian Federal employees shall be covered by the 'public option' because it is such a good idea."

See how Pelosi likes that.