Save the Planet. Paint the Roof. 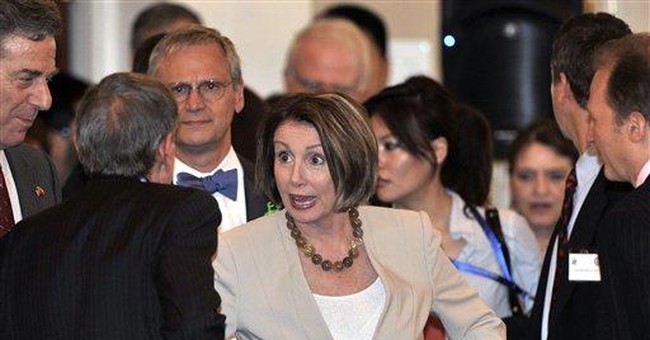 On February 10, 2003 - five months after the 9/11 attacks, but while we were still reeling from the anthrax attacks - the Department of Homeland Security sent out a press release which included the following:

How To Prepare For a Biological Attack

Assemble a disaster supply kit, including:

- Roll of duct tape and scissors

- Plastic for doors, windows, and vents for the room in which you will shelter in place.

To save time during an emergency, sheeting should be pre-measured and cut for each opening.

You may remember that point three - a roll of duct tape and scissors - was greeted with generalized hilarity, scorn, contempt, distain, and ridicule to mention but a few of the reactions among the very members of the press corps who were scared you-know-what-less about being the next recipient of a letter in the city room which puffed white powder when opened.

The other day, the current Secretary of Energy Dr. Steven Chu was speaking at the "St James's Palace Nobel Laureate Symposium" in London which, if it is not the most pretentiously named meeting on the planet, it must be among the top five, told his laureateal colleagues that we should paint much of the world white to reflect heat back up into space and, thus, cure global warming.

I am not making this up. Ok. I made up the word "laureateal" but the rest of this is true. From the London Times:

Building regulations should insist that all flat roofs were painted white, and visible tilted roofs could be painted with "cool-coloured" paints that looked normal, but which absorbed much less heat than conventional dark surfaces. Roads could be lightened to a concrete colour so they would not dazzle drivers in bright sunlight.

See? It's not as stupid as it first seems. Neither was the suggestion that you pick a room in your house you could seal off against anthrax, or pneumonic plague, or smallpox as dumb as the popular press made it seem.

The difference? The duct tape suggestion came from appointees in the administration of George W. Bush. The paint-it-white idea was suggested by an acolyte of B*A*R*A*C*K O*B*A*M*A so it is, by definition, good.

I think there is something in this so we should list all the items which can be changed to reflect sunlight back into space.

Trees. Trees are green. Notwithstanding every oil company ad in every medium, green is apparently a bad color. Trees are renowned for absorbing sunlight rather than reflecting it. We should spray paint every tree on the planet white. Dr. Chu says this will help.

Cars. Other than in Florida and certain retirement communities in Arizona most cars in America are not white. There are 250 million cars and light trucks in the U.S. of A. Every one of them should have a white hood, top and trunk.

B*A*R*A*C*K O*B*A*M*A already owns Chrysler and by Monday will own GM so he can do a reverse Henry Ford. He can, by edict, permit Americans to have a car in any color they want; as long as it's white. Ironic, huh?

Heads. There are six BILLION humans on the planet. If every one of us painted the top of our heads white, we would send so much sunlight back into space that Martians, because their planet is (like the door in the Stones song) red, will suffer irreparable harm and sue for damages. New Topic

What is the least likely invitation you think I might receive? Aw, you guess it. I will be a judge in the Miss West Virginia Pageant in June.