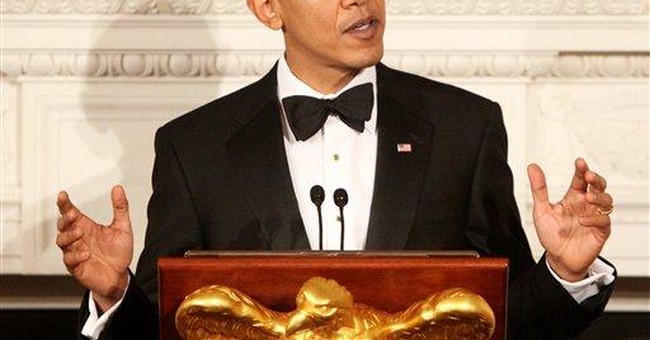 Atlas is done with merely shrugging. Atlas is raging. The Ayn Rand novel, "Atlas Shrugged" is much in the news this week because of the absolutely fantastic rant on CNBC the other morning by on-air editor Rick Santelli.

I happened to be watching CNBC when this all took place, although I suspect this may become one of those thinks like Woodstock which, over the years, seven million baby boomers have proclaimed they were in attendance.

This was the morning after President Obama had announced his plan to save the housing industry by helping bail out people who weren't making their payments - or who were struggling to make their payments.

Mr. Santelli is normally a strait-laced newsman; he has reported live from the Chicago Board of Trade for 10 years. But in an appearance on the morning show "Squawk Box" on Thursday, he suggested a "Chicago Tea Party" to protest the administration's housing plans.

The three principal points of the President's plan - according to the official executive summary - are:

1. Refinancing for Up to 4 to 5 Million Responsible Homeowners to Make Their Mortgages More Affordable

2. A $75 Billion Homeowner Stability Initiative to Reach Up to 3 to 4 Million At-Risk Homeowners

Remember Joe the Plumber? He became a media star because he asked candidate Obama about his tax plan. After a fairly reasonable answer, Obama said, "I think when you spread the wealth around, it's good for everybody."

It was not at all clear that Obama was talking about being Robin Hood at the time, but this housing plan certainly makes it seem that in the Obama world, taking from the rich to help the poor can stay in houses they couldn't afford when they bought them, can't afford now, and won't be able to afford under Obama's plan is a worthy goal.

Santelli said, from his usual location in Chicago, that the plan was "rewarding bad behavior." At one point he compared it to Cuba saying before the Castro era there was relative prosperity and opporotunity in Cuba, but now they all drive around in 1954 Chevys.

The White House trotted press secretary Robert Gibbs who said, "It's tremendously important that for people who rant on cable television to be responsible and understand what it is they're talking about. I feel assured that Mr. Santelli doesn't know what he's talking about."

Santelli has been in the world of finance for his entire adult life and probably knows a good bit more about that world then the White House press secretary does.

This episode is another in a string of bad days for the Obama Administration. In spite of his pledging bi-partisanship, he allowed Nancy Pelosi and her crowd in the House to craft the first version of the stimulus package which was then negotiated - in secret - to its final configuration.

Then he had that embarrassing Tom Daschle business. Then there was a disconnect between senior Democrats on whether Bank of American and/or Citigroup and/or Harry's Savings and Loan would have to be nationalized.

The markets are plummeting toward 10 year lows, unemployment shows no signs of abating.

Back to the bad news for the Administration:

Obama had to order 17,000 troops to Afghanistan, his belief in the Power of Nice having lasted about a month into his Presidency; the Iranians are claiming they now have enough enriched uranium to make a bomb and Benjamin Netanyahu, the Likud Party leader who chosen Friday to form Israel's next government has been known as a hard liner when it comes to land-for-peace deals with the Palestinians.

And now, on top of everything else, Obama has irritated John Galt.