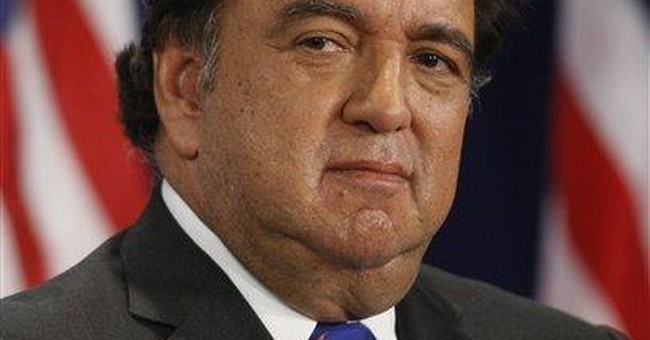 From the Albuquerque Journal:

"Gov. Bill Richardson has withdrawn from his nomination as U.S. commerce secretary, citing concerns about the timing of a federal grand jury investigation involving his administration in New Mexico."

According to the Journal, this all has to do with a California financial firm, CDR Financial Programs of Beverly Hills "which received $1.4 million for its work" on a bond issue.

"The FBI and U.S. Attorney's Office want to know how" a California financial firm, CDR Financial Programs of Beverly Hills, "got hired in 2004 to work on the $1.6 billion bond issue used to fund highway projects and the Rail Runner commuter train."

What they think happened was the chief executive of the California firm made two contributions totaling [at least] $85,000 to political organizations attached to Richardson. Here's why it raised the eyebrows of the feds:

"The first came six days after CDR was hired as a special adviser on the bond deal; the second was four days before Finance Authority staff recommended the company get the no-bid deal to manage the escrow account."

Whoa! Check, please (literally)! The no-bid deal? Not only a no-bid deal but there doesn't appear to be (what we in the business world would normally call) a contract involved, either. Again from the Albuquerque Journal:

"If you want to look at the formal contracts, you're out of luck. There don't appear to be any."

I know that's way more than you want to know about what the case is all about. Me, too. But that's not the part that is of interest.

President-elect Barack Obama announced the nomination of Peso Bill on December 3. The Journal published the existence of the investigation in August - some four months before Obama tapped Richardson.

The question, then, is: What did Peso Bill tell Obama about the status of that investigation and what his connection might be?

Are no-bid-no-contract million dollar deals in return for campaign donations so pervasive among Obama's political cronies that he and Richardson had a good laugh about it and walked out onto the stage in Chicago to announce the nomination?

Did Richardson promise to shave that cheesy beard if Obama would ignore the existence of a federal grand jury looking into just how Bill did business in Albuquerque?

There is no reason to think that Richardson is going to be indicted in this scandal. No reason to think he's not, either. But, nominations for Cabinet Secretary have been withdrawn for a lot less. The first 317 candidates for Attorney-General suggested by Bill Clinton had to withdraw because they hadn't withheld taxes on the wages they had paid their nannies.

To be fair, George W. Bush's first selection for Labor Secretary, Linda Chavez, had to step aside for the same reason.

And Bernie Kerik, Bush's choice to succeed Tom Ridge as Secretary of Homeland Security, bailed out because, according to the NY Times, "a nanny he had employed appeared to have been in the country illegally and that he had failed to pay taxes on her behalf."

Not paying Social Security and FICA for a nanny is pretty small beans compared to a federal grand jury investigating whether anyone bribed anyone in order to secure get a no-bid, sole-source contract - oops - deal with the State of New Mexico.

One can only hope that the national press corps, which has been so vigorously covering the transition, peels the "Elect Obama" strips off its collective bumpers just long enough to find out who in Obama-land knew what, and - to misquote Sen. Howard Baker - when did they know it?

Bill Richardson walking away from the Commerce job is probably best for everyone. It puts one fewer foreign policy expert (in addition to Secretary of State-designate Hillary Clinton and Vice-President-elect Joe Biden) in Cabinet meetings. Obama gets credit for nominating a high-profile Hispanic. And Richardson can grow that cheesy beard again.

Oh, So That's How 350,000 California Recall Votes Vanished from CNN's Vote Tally
Matt Vespa
How Many Afghan Refugees Are Headed to Your State? Here Are the Numbers.
Leah Barkoukis