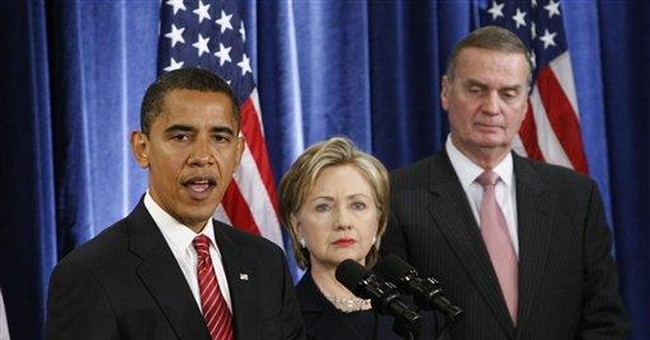 The biggie on that list is Sen. Clinton to be Secretary of State.

To be fair, former President Bill Clinton pretty much opened up his donor files and made his speaking schedule and new income sources subject to ethics reviews. Sounds like a small price, but for someone like Bill Clinton that - and other concessions - are very big deals.

The popular press was abuzz with conjecture as to whether former First Lady, soon-to-be Former Senator, and soon-to-be Secretary Clinton could toe whatever lines might be drawn by Mr. Obama.

But that's not going to be the fun part. The fun part is going to watch whether soon-to-be former Gov. Bill Richardson can keep his feet away from Hillary's toes.

Richardson was a minor Congressman from New Mexico when he engaged in some personal but Carteresque high profile foreign policy as the AP's Josef Herber reports:

As a seven-term congressman, Richardson showed a knack for freelance diplomacy, rushing off to such places as North Korea, Sudan, Cuba and Iraq on unofficial diplomatic missions.

In 1995, he persuaded Iraqi President Saddam Hussein to release two American aerospace workers who had wandered into Iraq from Kuwait. He helped free three Red Cross workers in Sudan and mediated with North Korea over the downing of two U.S. Army helicopter pilots.

You may remember that Richardson wanted to be President, but dropped out of the race in early January. Around Easter, despite assuring Bill Clinton that he would not abandon the Clintons who promoted him to UN Ambassador and Secretary of Energy, he endorsed Obama.

That led Mull-fave James Carville to say according to an NY Times piece by Adam Nagourney and Jeff Zeleny:

"Mr. Richardson's endorsement came right around the anniversary of the day when Judas sold out for 30 pieces of silver, so I think the timing is appropriate, if ironic."

That didn't happen, either. Not only did he not get the State Department gig, but it went to … Hillary Clinton.

And you wonder why I stay in Washington decade after decade.

Nice guy. Competent guy. Seen him lately on the Sunday shows talking about how the U.S. Department of Commerce is handling the economic downturn?

I am not beating up on the Commerce Department or on Secretary Gutierrez.

My point is, this is what Richardson got. The notion that he will be satisfied watching Hillary Clinton on Meet the Press every other week while he is sending strongly-worded letters to Senate and House Committee chairs is laughable.

Obama may be assembling a Team of Rivals, but there is no evidence that the team will play nicely together.

It is Obama and Billary. But the Bill is Richardson, not Clinton.