And Down the Stretch They Come! 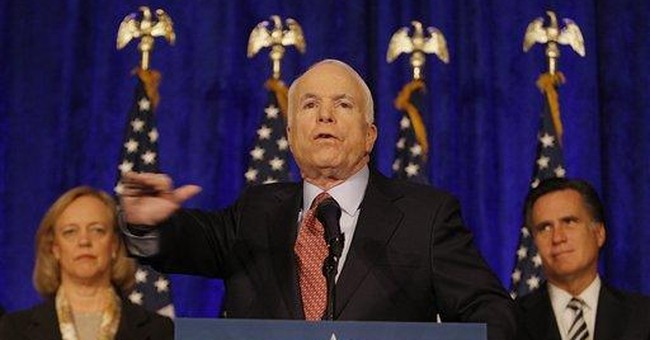 You know that the popular press has been busy arranging for good Inaugural Ball tickets following the swearing-in of Barack Obama next January.

Well, don't spend too much at the tailor's letting out the waistband on those tuxedos just yet.

Bill McInturff, pollster for the McCain campaign took a look at a series of polls taken by the Mason-Dixon company in the battleground states. The numbers? This is a long way from over.

According to McInturff, it is important to note that even in the states Obama is leading he is under 50%. So is McCain, but the case we are making is this thing has not yet been decided.

In Pennsylvania - which I have been saying is going to be 21 electoral votes for McCain - the race is tightening daily. After being stuck at a double-digit lead for Obama for the past two weeks, a newspaper poll released yesterday showed the lead down to seven for Obama.

Remember that Hillary beat Obama by about 10 percentage points in the primary there, despite being outspent 3-1. Pennsylvanians - at least rural Pennsylvanians - were the subject of Obama's highly touted closed-press fundraising remarks in San Francisco.

Obama, talking about job losses over the past 25 years, said (according to the transcript in the Huffington Post):

"You go into some of these small towns in Pennsylvania, and like a lot of small towns in the Midwest … they get bitter, they cling to guns or religion or antipathy to people who aren't like them or anti-immigrant sentiment or anti-trade sentiment as a way to explain their frustrations."

Let's go back to Ohio for a second (in which Mason-Dixon has McCain with a two point lead). Two years ago, in the wipe-out of 2006, Republicans lost pretty much everything there was to lose: Governor. U.S. Senator. Control of the State Legislature. At least one U.S. House seat.

In 2006 Governor Robert Taft was so unpopular he was the only politician in the United States who wished he had George Bush's approval numbers. Congressman Bob Ney went to jail in the Jack Abramoff scandal. And on and on.

In 2007 no one would have believed that Ohio was going to be seriously contested in the Presidential race. The GOP was so far down, that it was pretty much off the board as a battleground state. In 2008, not only is Ohio in play, but McCain has a slight lead.

Oh, and by the way, Gov. Sarah Palin was at Marietta College, Marietta, Ohio 45750 yesterday. She was greeted by, according to reporting by Melissa Walther in the Marietta Register, a "pumped up" crowd "of more than 2,000" at the field house on the campus.

I don't believe I'm breaching a confidence by relaying this from McInturff's e-mail:

In our internal numbers, there has been positive movement on voters seeing Obama as the "risky choice" and as McCain as the candidate who "will keep taxes low." As a pollster, this means there is a shift on the attributes that helps provide an understanding of what is causing the ballot to tighten.

There may be upwards of 130 million Americans voting in this election (not counting Mickey, Minnie, Goofy, Pluto and all the other cartoon characters registered by ACORN). That may be 10 million or more than voted in 2004 - the previous high turnout.

As we head into the final stretch, make certain you are one of them.