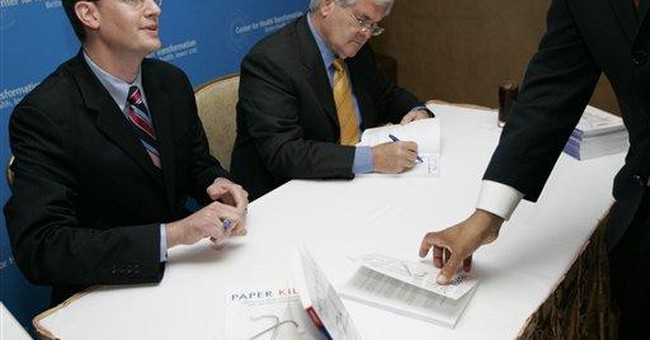 In late February 2008 I joined GOPAC as its executive director at the request of Speaker Newt Gingrich. GOPAC was held in fairly low regard by the national political media and one of my assignments was to improve the relationship between GOPAC and the press.

I talked with the chairman of the board, Shelly Kamins, about writing a regular column based upon the irregular columns I had written as the communications director for the Speaker's political office which had been called, "Talking Points."

Hence, the bullet-point format of MULLINGS.

Shelly thought it would be worth the try so on March 11, 1998 a re-named column - MULLINGS - was faxed out to 200-or-so reporters on GOPAC's press list.

The concept of the "blast fax," by which a fax was sent to a service which they then "blasted" out to whatever list you had provided, has gone the way of the slide rule.

In 1998 the notion of e-mail being ubiquitous was unheard of - if not unthought of.

MULLINGS was a made-up name based upon my long-held theory that no person in regular conversation uses the verb "to mull." No one, for instance, has ever said to his or her spouse: "Honey, I'm mulling over whether we should have Chinese or Italian tonight."

Associated Press headling writers, on the other hand, use it all the time: "Bush Mulls Budget Cuts."

For several years the MULLINGS header contained the two definitions I had adopted:

The earliest MULLINGS were less than 500 words each, a length which was necessary because back in the day it cost - as I remember - twenty-five cents per page to use the blast fax service so I was very careful to keep the copy to less than 500 words which would fit on one page. Even an extra line on a second page was an additional 25¢ per recipient which got pretty expensive pretty quickly.

There have been several gaps in production over the years. Just a month after I started at GOPAC and began MULLINGS, I had cardiac bypass surgery which cost about six weeks of output. Then in 2009, after Newt had left the House (and GOPAC) the new masters decided that MULLINGS was too edgy so I stopped writing the column until I left GOPAC and restarted MULLINGS as a for-profit operation.

The next big gap was during the Iraq tour of duty. If you work for the Federal government you can write or speak for pay, but you cannot get paid for writing or speaking about what they are already paying you to do.

If MULLINGS had been a gardening column, I could have continued to write it. But the DoD lawyers said that for every month I was in Iraq (on their payroll as a civilian employee) I had to extend paying readers' subscription by a month. That is the principal reason Subscription Month has moved from the Spring to the Fall.

The other issue about writing from Iraq was: It was impossible to find the time to write three days a week, so I saved it up for a lengthy essay which I generally wrote on Sundays. The Iraq Travelogues (there were 24 in the series) remain some of the most widely read of all the stuff I've written.

In 1999 we switched from faxing MULLINGS to e-mailing them and putting them up on the MULLINGS.com webpage. For almost all the ensuing nine years, three sponsors have been aboard: Becki Donatelli (at campaignsolutions.com), Ed Goeas (at tarrance.com), and Page Moon (at focusdatasolutions.com).

The database, as of this writing, contains just over e-mail 37,000 addresses. In addition, according to the automated statistics, nearly a half million people a month visit MULLINGS and take a look at one or more pages.

Because they are written three times per week, there are usually between 12 and 13 MULLINGS each month. That means that I went past the 1,500 column mark sometime last September - a benchmark I also missed.

There are a few columns which are repeated each year, among them:

According to my informal count, there have been 1,508 MULLINGS and Travelogues which have averaged about 700 words each for a total of some 1,055,600 words - not counting the Secret Decoder Ring page which often takes longer to construct than the actual column.

Speaking of the SDR, the Mullfoto began as an irregular addition to the Secret Decoder Ring page in 2002 but has become a daily feature long since.

My favorite Mullfoto comes from the Iraq sequence. You can see it on today's SDR by clicking on the link at the bottom.

I read somewhere that the average mystery novel contains about 62,500 words. If that is true than I have written the equivalent of nearly 17 mysteries over the past 10 years.

It is one thing to have written MULLINGS for all these years, but the real mystery is the number of you who keep reading them, commenting on them, correcting them, and sharing them with your friends, colleagues and families.

Thank you. Here's to another ten.