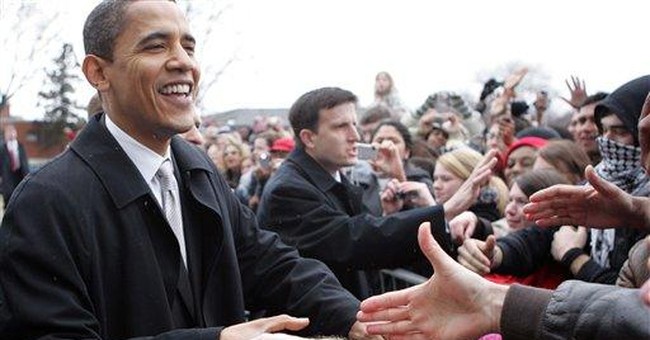 On CNN's Strategy Session with Wolf Blitzer, I suggested that Michelle Obama, like Shakespeare's Queen Gertrude, seemed to be protesting a bit too much about this whole middle name thing.

The Chicago Tribune's Mark Silva quoted Mrs. Obama as saying: "They threw in the obvious, ultimate fear bomb … When all else fails, be afraid of his name, and what that could stand for, because it's different."

Second what is that about "…and what that could stand for …"? Is there something the name "Hussein" stands for which I, for one, am not aware?

Third, the name Hussein is generally held in high regard when applied to the late leader of Jordan, King Hussein I. For instance, King Hussein spoke at the funeral for Israeli Prime Minister Yitzak Rabin and said, in part, I had never thought that the moment would come like this when I would grieve the loss of a brother, a colleague and a friend - a man, a soldier who met us on the opposite side of a divide whom we respected as he respected us.

That's pretty good, isn't it? I mean for a guy named "Hussein."

Fourth, that nonsense about being "afraid of his name … because it's different," is just silly. As noted above there have been other men named "Hussein" on the world stage. Hussein isn't that different.

Finally, remember a couple of weeks ago when Michelle Obama said for the first time in her life she was finally really proud of her country? And people like me took her to task for that. And people like me were scolded and were told "they're just words."

Hey, Mitchy? It's just a name. To close the Shakespeare loop, as Juliet said in Act II, Scene II:

"What's in a name? That which we call a rose
By any other name would smell as sweet."

And, who can forget that scene in the movie "Stripes" (which Shakespeare himself might have written) in which that great American philosopher, Sergeant Hulka, says to the Army recruit who has threatened to kill anyone who calls him by his real first name:

That "Three A.M." ad which Hillary Rodham Clinton is running against Barack H. Obama goes straight to the heart of her campaign theme: She's ready to deal with national emergencies; he is not.

I think, all in all, it is a pretty good ad, but it might be an ad which works better with Republicans (for whom national security remains a huge issue) than Democrats (many of whom believe the economy is Topic One).

But I don't care about that. What I find fascinating is the image of Hillary Rodham Clinton, answering the phone at 3 A.M., dressed in a fresh suit, fully made up with lipstick at the ready, and even wearing a necklace.

I think her campaign might have made real strides with rank-and-file Democrats if her staff would have had her answer the phone at 3 AM dressed in a ratty old robe, no make up, her hair uncombed, a cigarette hanging from the corner of her mouth, and a bunny slipper dangling from one foot.

Which is how most of us would answer the phone if it rang at Three A.M.

Isn't that a bit sexist?

Why? I don't wear make up at Three A.M., either. And I'd prefer not to talk about my bunny slippers right now, if you don't mind.

Delegate Counting: According to Slate.com Obama has 1,192 pledged delegates even before the four primaries tomorrow. The magic number to clinch the GOP nomination is 1,191.

Someone call Mike Huckabee and tell him he can drop out now. Obama is the Republican nominee.