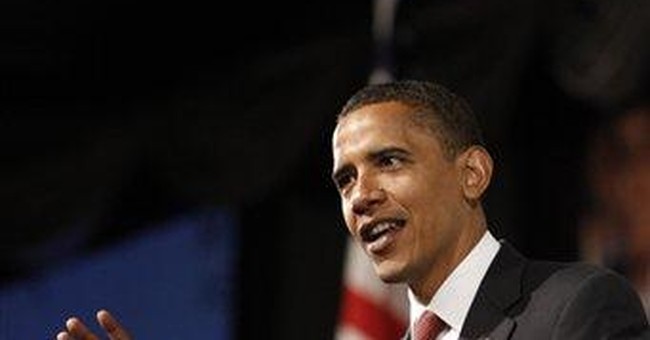 Derailing the ‘Health Care Express’ is essential if Americans are to ensure that health care will always be available to every citizen. Those who previously climbed aboard can – and should – disembark immediately. All others can avoid the conductor’s call of ‘all aboard’ by ‘tuning-out’ the administration’s joint programming upcoming on the ABC television network.

Make no mistake, ABC’s multiple productions, direct from the White House, are intended to convince everyone to respond favorably to the administration’s orchestrated messaging. Anyone tantalized to watch ABC this Wednesday would be wise to respond to the soothsayers call with a convincing “No way!”

That would be a first step toward ensuring that health care will always be available to every responsible citizen.

The next wise step for citizens would be to turn off the TV set, and tune their thinking to how best to address personally their individual and family health care needs.

Yes, that may be a ‘novel’ approach to many. But, it’s the responsible way.

Every citizen can do it. Government could actually help… by getting out of the way.

We’ll outline here how small yet significant changes can empower every citizen to responsibly deal with their personal, and, where applicable, their dependent family members health care.

First, some background including relevant facts and commentary.

President Obama, and others with special interests in perpetuating and expanding government involvement, use costs to stoke fear, anxiety, and as justification for what they have puffed-up into a crisis. Setting aside how some have manipulated cost data, and other facts, for their own purposes; past GAO reports do point out that “health care spending on average has grown much faster than the economy… from 1975 through 2005, aggregate public and private spending on health care grew from about 8 percent to 16 percent of GDP… in 2005, public and private spending totaled $2 trillion… [and] is projected to grow to 20 percent of GDP by 2015.”

That’s alarming. As it should be.

It is also why politicians can say that “health care spending will approach one dollar in five” in a few short years. But, more importantly, it is also a major reason why every citizen should conclude “No Way!” to expanded government intervention in health care; while moving expeditiously to push government entirely out of the health care equation.

Consider your own situation.

You are either Single or Married, and with or without dependents. Thus you are only responsible for yourself and, if applicable, your spouse and children.

Put another way, you and every other individual are responsible for your current and future health condition as well as the costs, directly and indirectly, related to maintaining and improving that condition, plus the costs incurred to correct diagnoses that are the result of your own choices and personal behavior. In addition, as an adult and as a parent, that responsibility expands to include any other individual deemed dependent on you.

Let’s look at an average period of health care receipts. We’ll begin with a planned visit – your annual physical – followed by a several unscheduled visits due to various illnesses. Along the way, you also sought emergency room care; and, later, elective surgery required a 10 day hospital stay. In addition to fees for your doctor office visits, and the respective hospital charges; add the charges billed by various other doctors, surgeons, anesthesiologists, and, perhaps, other specialists. While this scenario may excludes other possible health care services such as rehabilitation facility stays, home care, etc; your scenario would certainly include the costs of drugs prescribed for various ailments, illnesses, and ongoing therapies.

No wonder growing numbers of people have become so susceptible to the siren song sung by political soothsayers who sell ‘universal’ health care to the masses as if no one has to pay.

Most people know the lie but close their eyes in order to not see their better self staring back at them in the mirror of personal responsibility. To open their eyes is to admit knowing the truth - politicians aggressively spinning their version of the classic social good into opportunities for gather votes.

Because of such irresponsibility over the years– those consumers and many incumbent politicians – funding health care via government increasing involvement has already made the system unsustainable. Permitting more government intrusion would add still more burden on citizen taxpayers and increase moral hazard.

What is needed is a way for growing numbers of individuals to be personally responsible for themselves, and their dependents.

Outlined here are principles of a ‘Blueprint for Better Health Care’ that will lower costs:

Each individual – citizen or non-citizen - living within the United States, and its territories, is personally responsible to directly pay any health care provider for every service rendered to them - or to their dependents.

Each receipted out of pocket expenditure is tax deductible as a credit on the federal tax return filed by a U. S. Citizen. Those citizens with employer provided benefit coverage could deduct only the net difference. Citizens without third party coverage would be able to deduct the full cost of each actual expenditure, while those who purchased their own benefit coverage could deduct both premium and any net additional payments. Non-Citizens filing U.S. tax returns would not be eligible.

Employers providing benefit coverage – including insurance company published plans or cost-plus third party administered plans - could deduct all health care benefit plan costs on corporate tax returns providing the employer directs all insurance carriers and administrators to reimburse all plan covered charges only to the employee, who is responsible, in turn, to pay obligations to any service provider.

No health care service legally provided to an American citizen by a medical professional or delivered at a medical facility could be taxed by any level of government within the United States or its territories.

No health care benefit payment, reimbursement, etc. or employer provided benefit plan coverage to an American Citizen can be taxed by any level of government within the United States or its territories.

Health care plans, insurance companies, et al will issue payment for contract covered items only to their customer or the employee covered by an employer provided plan. That individual remains responsible for payment to the health care provider.

No person needing emergency medical attention should ever be denied physician services or hospital-clinic emergency care. Following medical diagnosis and/or stabilization of condition - whichever is later – the respective service providers may provision subsequent services subject to arrangements made directly with the patient or responsible individual.

Hospitals, etc. are encouraged to establish charitable foundations, or expand the mission of existing foundations, in order to accept contributions from individual Americans and domestic corporations, to be used 100% and exclusively to defray the actual rated costs of health care services to specific indigent U.S. Citizens. Such donors would be permitted full tax credits.

Any U. S. Citizen unable to pay for contract coverage, or any part of the incurred costs of health care services actually received, can assign their tax credit deduction, up to the actual amount paid on their behalf, to another U.S. Citizen who actually paid the obligation, if that person possesses a paid receipt from the service provider.

Care facilities, Doctors, Surgeons, et al, might also be permitted to deduct as a tax credit up to one-half of the lower published rate - their own, the state medical society, or state facility average - for each service provided pro-bono or free to a patient who is a U. S. Citizen at the time of the service was actually provided. (The patient should be required to sign a statement, provided to the paying citizen, that they have not personally used the deduction on their own tax return previously, and that they understand they will no longer be legally able to do so. Such signed statements must be submitted with the payer’s tax return along with a paid receipt issued by the service provider.)

Hospitals, et al should not be permitted to ‘spread the cost’ of providing services to any one patient, or selected set of patients, by increasing rates charged to any other patients. Every service provider should establish a specific ‘fee for service’ rate for each service offered in the marketplace. The rate schedule should be published online and conspicuously posted in patient waiting areas, with more detailed explanations available upon request.

This blueprint reinstates individual responsibility for themselves, their family, and other dependents. It should also stimulate the motivation of individuals to find, and retain, employment. Because this approach effectively self-funds citizens in situations without employer provided benefits, all responsible individuals - including those citizens in lower income brackets - are treated equitably.

This blueprint is based on the principle that each individual citizen is solely responsible for the cost of health care for themselves and their dependents. Those individuals - without employer coverage or temporarily unemployed - should know whether their current providers will provide terms given their temporary circumstance. If their current providers do not, or will not, provide direct payment plans, the proactively responsible personal action each individual should take is to seek services from other doctors, clinics or hospitals willing to accept that individual’s ‘promise to pay’, including signing a payment agreement.

This solution also exposes the false rubric of ‘equitable financing’, used by statist’s pushing government installed ‘universal’ health care, in order to foist central control on all Americans. After all, what can be more ‘equitable’ than each individual citizen accepting their responsibility for providing for their own, and their dependents, health care needs?