Regnery Publishing
|
Posted: Jun 11, 2018 12:15 PM
Share   Tweet
The opinions expressed by columnists are their own and do not necessarily represent the views of Townhall.com. 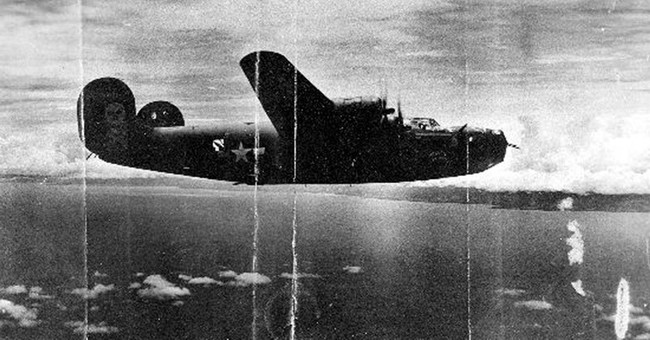 From the D-Day Normandy landing to the Italian declaration of war on Germany and the liberation of Rome from the Nazis, June is a month rife with WWII dates and historical significance. Regnery History  has an enormous assortment of books dedicated to these topics that present the essentials for every WWII buff. From stories of heroism and handy reference guides to the uncovering of mysterious disappearances and assassination attempts, the World War II Collection provides a wide array of exciting experiences. Read on to discover ten of Regnery’s favorite WWII stories!

Join George Starks as he retraces his steps to freedom and discover the amazing stories of sacrifice and survival - how ten young American boys plus their French Helpers became heroes. As a young band of brothers flies over German-occupied France, they come under heavy fire. Their B-17 is shot down and the airmen—stumbling through fields and villages—scatter across Europe. Some struggled to flee for safety. Others were captured immediately and imprisoned. Written by Carol Engle Avriett, this story is an incredible tale of grit, survival, and reunion.

The Last Fighter Pilot: The True Story of the Final Combat Mission of World War II

From April to August of 1945, Captain Jerry Yellin and a small group of fellow fighter pilots flew dangerous bombing and strafe missions out of Iwo Jima over Japan. Even days after America dropped the atomic bombs on Hiroshima on August 6 and Nagasaki on August 9, the pilots continued to fly. Though Japan had suffered unimaginable devastation, the emperor still refused to surrender.
Bestselling author Don Brown (Treason) sits down with Yellin, now ninety-three years old, to tell the incredible true story of the final combat mission of World War II. Nine days after Hiroshima, on the morning of August 14th, Yellin and his wingman 1st Lieutenant Phillip Schlamberg took off from Iwo Jima to bomb Tokyo. By the time Yellin returned to Iwo Jima, the war was officially over—but his young friend Schlamberg would never get to hear the news. The Last Fighter Pilot is a harrowing first-person account of war from one of America's last living World War II veterans.

In War Animals, national bestselling author Robin Hutton (Sgt. Reckless: America's War Horse) tells the incredible, inspiring true stories of the fifty-five animal recipients of the PDSA Dicken Medal during WWII and the lesser-known stories of other military animals whose acts of heroism have until now been largely forgotten. These animal heroes include: G.I. Joe, who flew 20 miles in 20 minutes and stopped the planes on the tarmac from bombing a town that had just been taken over by allied forces, saving the lives of over 100 British soldiers; Winkie, the first Dickin recipient, who saved members of a downed plane when she flew 129 miles with oil clogged wings with an SOS message that helped a rescue team find the crew; Chips, who served as a sentry dog for the Roosevelt-Churchill conference; and Ding, a paradog whose plane was hit by enemy fire on D-Day, ended up in a tree, and once on the ground still saved lives. A heartwarming and sometimes even hilarious history of hero birds, dogs, horses and more, War Animals is a World War II story you've never read before.

The Bridgebusters: The True Story of the Catch 22 Bomb Wing

The men of the 57th Bomb Wing flew out of Corsica during World War II and bombed vital bridges throughout Italy to sabotage German supply routes. Their missions were dangerous and never-ending. One bombardier in the wing was a young New Yorker named Joseph Heller, who would later turn his experience into the classic 1961 war novel Catch-22. Now aviation historian Thomas McKelvey Cleaver takes a closer look at the real-life men of the 57th, whose camaraderie in the face of death inspired the raucous cast of heroes and antiheros in Catch-22.

The Hunt for Hitler’s Warship

Winston Churchill called it "the Beast." It was said to be unsinkable. More than thirty military operations failed to destroy it. Eliminating the Tirpitz, Hitler's mightiest warship, a 52,000-ton behemoth, became an Allied obsession.

In The Hunt for Hitler's Warship, Patrick Bishop tells the epic story of the men who would not rest until the Tirpitz lay at the bottom of the sea. In November of 1944, with the threat to Russian supply lines increasing and Allied forces needing reinforcements in the Pacific, a raid as audacious as any Royal Air Force operation of the war was launched, under the command of one of Britain's greatest but least-known war heroes, Wing Commander Willie Tait.

Patrick Bishop draws on decades of experience as a foreign war correspondent to paint a vivid picture of this historic clash of the Royal Air Force's Davids versus Hitler's Goliath of naval engineering. Readers will not be able to put down this account of one of World War II's most dramatic showdowns.

Measure of a Man: From Auschwitz Survivor to President’s Tailor

He's been called "America's greatest living tailor" and "the most interesting man in the world." Now, for the first time, Holocaust survivor Martin Greenfield tells his incredible life story. Taken from his Czechoslovakian home at age fifteen and transported to the Nazi concentration camp at Auschwitz with his family, Greenfield came face to face with "Angel of Death" Dr. Joseph Mengele and was divided forever from his parents, sisters, and baby brother.
In haunting, powerful prose, Greenfield remembers his desperation and fear as a teenager alone in the death camp—and how an SS soldier's shirt dramatically altered the course of his life. He learned how to sew; and when he began wearing the shirt under his prisoner uniform, he learned that clothes possess great power and could even help save his life.
Written with soul-baring honesty and, at times, a wry sense of humor, Measure of a Man is a memoir unlike any other—one that will inspire hope and renew faith in the resilience of man.

The Myth of Hitler’s Pope: Pope Pius XII and His Secret War Against Nazi Germany

In Rabbi David G. Dalin's controversial new book, he explodes the newly resurrected, widely accepted, yet utterly bankrupt smearing of Pope Pius XII, whom Jewish survivors of the Holocaust considered a righteous gentile. Called by Michael Medved, nationally syndicated radio talk-show hot and best selling author, “A courageous, impassioned, and desperately needed book that restores essential balance to the ongoing discussion of one of the most reviled figures in recent religious history.”

D-Day Encyclopedia: Everything You Want to Know About the Normandy Invasion

This unique encyclopedia provides detailed entries for everything you ever wanted to know about D-Day, the invasion of Normandy. Organized alphabetically, the entries give detailed descriptions of weapons, equipment, divisions, air and naval units, geography, terminology, personalities, and more. Every Allied division that crossed the English Channel on June 6, 1944 has its own listing as do the major Axis divisions that fought them. Brief biographies of major military and political leaders on both sides provide a handy who's who of the campaign. The book also includes entries for related popular culture: GI slang, the best movies about D-Day, and major writers such as Stephen Ambrose and Cornelius Ryan. Cross-references make the book easy to use. With hundreds of entries, The D-Day Encyclopedia is an indispensable reference tool for history buffs and great browsing for readers who want to know more about World War II.

Battle-Hardened: An Infantry Officer's Harrowing Journey from D-Day to VE-Day tells the story of an American soldier's growth from a 2nd Lieutenant eager to prove his worth in battle to a skilled and resolute commander over the course of the Northern European Campaign. Craig Chapman delves deep into the personal recollections and mental state of Bill Chapman as he fought against the Nazis, enduring frontline combat and witnessing horror on a massive scale. Lieutenant Chapman maintains his sanity by isolating his emotions from the chaos of the battlefield, and the young officer turns into a hard-edged warrior who dispassionately orders men to risk their lives yet still manages to hold onto his humanity.

In the middle of World War II, Nazi military intelligence discovered a seemingly easy way to win the war for Adolf Hitler. The three heads of the Allied forces—Franklin Roosevelt, Winston Churchill, and Josef Stalin—were planning to meet in Tehran in October, 1943. Under Hitler's personal direction, the Nazis launched “Operation Long Jump,” an intricate plan to track the Allied leaders in Tehran and assassinate all three men at the same time. “I suppose it would make a pretty good haul if they could get all three of us,” Roosevelt later said. Historian Bill Yenne retells the incredible, globe-spanning story of the most ambitious assassination plot ever thwarted in Operation Long Jump.