Rebecca Hagelin
|
Posted: Aug 30, 2018 12:01 AM
Share   Tweet
The opinions expressed by columnists are their own and do not necessarily represent the views of Townhall.com. 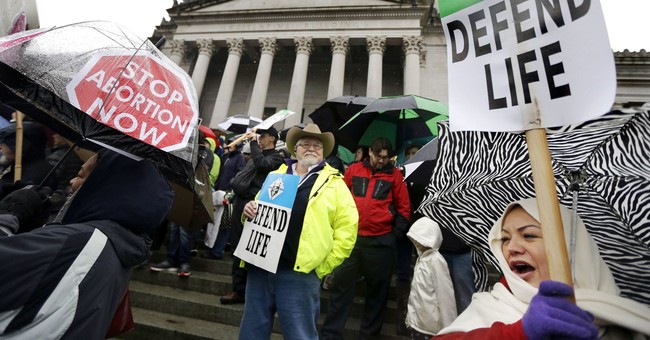 Their stories are rarely told, their sorrow unknown in a public debate largely controlled by radical feminist ideology. These silent victims of abortion are the broken fathers.

Joe Baker and his organization, SavetheStorks.com, are shouting their stories from the housetops.

In a powerful, short video featuring real fathers who share their heart-wrenching stories of guilt and loss over the role they played in killing their preborn children, Mr. Baker gives men a voice in an issue where they have been largely shut down.

The first video in the series can be viewed at www.SaveTheStorks.com. One video per week featuring the fathers of aborted babies will be released from now through Father’s Day.

If you have any interest in the issue of abortion — pro or con — justice requires that you hear from fathers, too.

Of course, we all abhor “dead-beat dads” — who get a woman pregnant and then just take off. And then there are the fathers who encourage their girlfriends or wives to have an abortion. Feminists hold the latter up as heroes.

But what they don’t ever tell you is that many of these men are wracked by a lifetime of heartache, guilt and regret over the role they played in killing their preborn children. The fact is, there are millions of men in our country who need to voice their sorrow so that they can begin to heal. Just as many post-abortive mothers seek counseling and learn to forgive themselves, post-abortive fathers need such avenues too.

Save the Storks is providing a path to healing for the forgotten fathers who are suffering in silence.

Although Mr. Jones is not included in the Storks video, his story represents a third category of father: the dad who desperately wants to hold, love and raise his child but who is legally unable to protect the life of his own son or daughter.

A few days before Mr. Jones’s 17th birthday, his girlfriend told him she was pregnant. The two of them decided that he would drop out of high school and join the Army to support his family. While he was in boot camp, she wore baggy sweatshirts to conceal her pregnancy from her parents for as long as possible. The two exchanged letters, excitedly sharing their joy over their baby and future lives together. They even decided on names: Joshua for a boy, Jessica for a girl.

Then one spring day in 1989, Mr. Jones received a call from his girlfriend, who was sobbing. Through anguish and tears she kept repeating, “I’m sorry. I’m so sorry.” Her parents had discovered the secret pregnancy and forced the young mother to have an abortion.

“She sounded as if she was crying from her soul,” Mr. Jones recalled.

He went into a rage over the murder of his child and begged his sergeant to call the police. The sergeant explained that abortion is legal, that there was nothing Mr. Jones, as the father, could do.

At that moment Mr. Jones dedicated the rest of his life to doing what he can to end legal abortion. He continues to work valiantly to this end, some three decades after the death of what turned out to be a little girl: Baby Jessica.

Let me be clear: abortion is murder, and preborn humans deserve protection from being butchered. Abortion is not a “states rights” issue — it is a human rights issue.

While abortion is still legal, it’s time that fathers have the ability to protect their sons and daughters. The science of pregnancy is pretty basic: Every pregnancy consists of three people — the baby, the mother and the father. Yet we’ve accepted the argument that the only one legally permitted to have a “voice” in the decision to abort is the mother?

If abortion is a decision falling under the category of “reproductive rights,” then the decision must include the voice of the father, too.

Current laws regarding reproduction are immoral and even bonkers. In some states, for instance, although a wife must sign permission for her husband to have a vasectomy, the wife can kill her husband’s preborn child without his knowledge, let alone his permission.

Something is seriously askew in a society in which men are gagged and denied the right to protect their sons and daughters. Just as it was wrong to silence women in the public square in our nation’s early history, so is it wrong to silence men.

There is no equality under the law when a father is legally forbidden to protect the life of his child. Yet this injustice is never spoken of in the debate that continues to rage over abortion.

Now, that’s changing. Through the great work of two very brave men, Joe Baker and Jason Jones, the third party in the reproductive debate is finally finding a voice.

Take time to hear from fathers at SaveTheStorks.com, and watch the life affirming films at MovieToMovement.com.