Rebecca Hagelin
|
Posted: Mar 22, 2018 12:01 AM
Share   Tweet
The opinions expressed by columnists are their own and do not necessarily represent the views of Townhall.com. 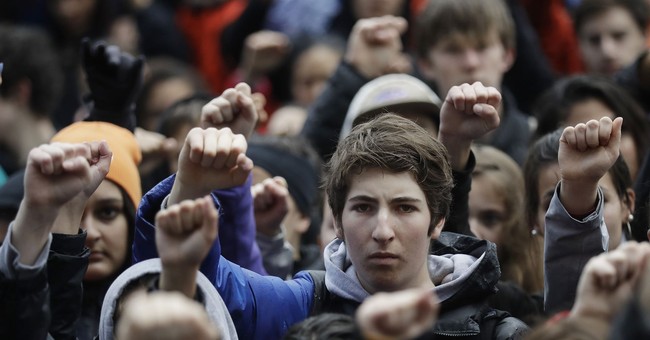 Trending
“Knowledge is power. The problem with knowledge in regards to our young people today, is that they aren’t receiving it.” Tina Marie Griffin, founder of Counter Culture Mom hit the nail on the head in our recent conversation about “student” gun protests.
“Our teens are largely being brainwashed by a culture that is training them how to kill through violent media including TV shows, movies and video games,” says Mrs Griffin. “Combine that with an education system in which students are no longer being taught the principles of the United States Constitution, and we have a major disaster on our hands.”
As students participate in adult-sponsored walk outs and street marches for gun control, it’s important to note that few have ever received a single lesson about the history and reasoning behind the precious Second Amendment. And they have no concept that it is God - not man - who created us with certain, inalienable rights. No wonder glassy-eyed youth are willing to raise clenched fists in support of every newly fabricated and bizarre “right” being minted daily by courts, bureaucracies, councils, boards, and radical organizations.
The same liberal agenda that has kept an entire generation ignorant on the fundamentals of freedom has been pummeling them with countless images of unspeakable violence and firearm savagery in movies and video games.
Our education Establishment has been telling today’s teens that guns are “bad” since they were in grade school, even banning children from drawing pictures of guns or talking about them. At the same time we have allowed the self-important teachers’ union to dispense with any real effort to teach the Constitution, or explain the historical need for citizens to have the right to self defense. All the while our society is filled with “professionals” who keep making self-serving excuses for not effectively treating the mentally disturbed, and “Hollywood” propagandists who perversely twist what it means to bear arms.
CARTOONS | Al Goodwyn
View Cartoon
The result of this Leftist brainwashing? A fired up, uneducated Generation Z that barks on command.
This current attack by the Left using our children to forward their nihilistic agenda is just the tip of the iceberg.
“The point is,” Mrs. Griffin says, “that in every facet of our society, kids are being conditioned to believe, act and become anything but the critical thinkers and independent people of value that God created all of us to be.
And our youngest children will be affected the most as an ever more radical, Godless ideology is forced upon them.”
So what’s a parent to do?
The best source I know in arming moms and dads to understand the real enemy and how to fight back is Griffin’s www.CounterCultureMom.com.
There you will find a wealth of resources and a description of Mrs. Griffin’s fabulous speaking series, including multi-media presentations that “expose the hypocrisy of Hollywood celebrities along with the consequences of ingesting harmful media” and how “destructive media are causing a teen identity crisis.”
You can add also receive immediate free tools from Counter Culture Mom to help you dissect Leftist propaganda by texting MEDIAGUIDE to 44222.