Note to the Donald Trump: It's Child Abuse Prevention Month

Rebecca Hagelin
|
Posted: Apr 22, 2016 12:01 AM
Share   Tweet
The opinions expressed by columnists are their own and do not necessarily represent the views of Townhall.com. 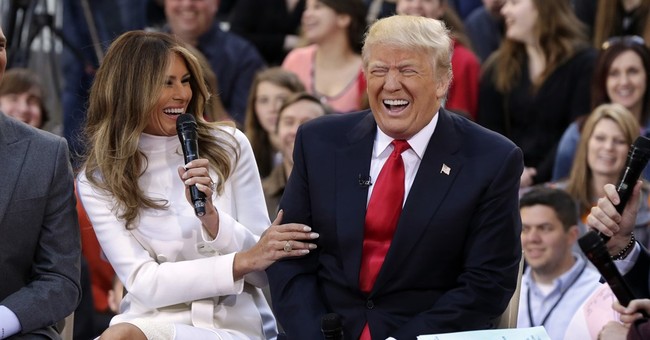 What unfortunate timing for Donald Trump: April is Child Abuse Prevention Month, yet he revealed yesterday on the "Today Show" that he thinks it is perfectly fine for a man - a stranger - to be in a public restroom with a little girl.

As someone who has spent much of my adult life working to help parents protect their children, it's more than disturbing to think that a serious contender for the GOP presidential nomination is making it easier for predators to abuse our children. My goodness, if there is anyone who should be standing up for our sons and daughters it is a presidential candidate! It's down-right frightening to think that "The Donald" is more concerned with being PC than he is about protecting our kids. But......not surprising.

Mr. Trump has been masquerading as a conservative for many months now. His record of supporting partial-birth abortion and his call for continued funding for Planned Parenthood, combined with his awful sordid remarks about women and recounts of his many sexual escapades (read my previous column: Meet Donald Trump: The King of Sleaze) should be enough to alert Republicans that he is a phony, and unfit to be the leader of our nation. But for those who are still hanging on to the hope that he has changed, Donald's Today Show interview should be the wake up call they never wanted, but must answer.

"The Donald" doesn't seem to care that perverts have already started taking advantage of inane policies in some areas that allow men to use women's restrooms and vice versa. He must not be bothered by the fact that recently in Seattle, Washington a man entered the girls' restroom and started taking off his clothes in front of a youth swim team. When asked to leave by management, the man simply returned later in the day and did the same thing, stating the laws allowed him to be there. Or the case in Pennsylvania ( read the story here: http://wncn.com/2016/04/20/man-charged-after-10-year-old-says-he-watched-her-in-bathroom/) where a man was arrested for allegedly watching a 10 year old girl go to the bathroom. In this case, he had his cell phone and was also viewing porn in the stall next to her. Yet, in Donald Trump's world, that man had the right to be there - and it would only be AFTER the predatory behavior had occurred that the man could be arrested.

Thank God, as Republicans are discovering that Donald Trump is a actually a leftist only pretending to be a conservative, they are flocking to support Ted Cruz. I'm so honored to also support the only true conservative running for president - someone who has fought for parental rights, religious freedom and common decency. Someone who cares so deeply about America's children that he is not afraid to be politically incorrect. It did my heart good to hear Ted Cruz boldly say yesterday, "Donald Trump is no different from politically correct leftist elites. Today, he joined them in calling for grown men to be allowed to use little girls’ public restrooms. As the dad of young daughters, I dread what this will mean for our daughters - and for our sisters and our wives. It is a reckless policy that will endanger our loved ones."

To do my part in countering Donald Trump's advocacy of a policy that will only lead to mischief and potential harm of our children, and in honor of Child Abuse Prevention Month, here are ten safety tips (some of which are in my new book, "30 Ways in 30 Days to Strengthen Your Family"):

2) If you are a female and enter a public restroom in a venue that allows men to be in the restroom with you, carry a gun. (Ok, so this one isn't for children, and it isn't in my book either. But those of us who practice our 2nd Amendment Rights will have a secret weapon should a Peeping Tom appear!)

3) Don't let your children go into a public bathroom alone. In a "bathroom emergency", stand outside the door of the restroom and let your presence be known by everyone in that restroom. Better yet, ask a store manager or security guard to stand with you at the doorway with both of you making your presence known.

4) Enroll your children in basic self-defense classes. Look for classes that are age specific - your very young child might not be able to fight back, but they certainly can be taught to scream bloody murder if they feel threatened. Remember, a polite or shy child will need your permission and encouragement to throw etiquette to the wind when they are in danger.

5) Make sure your teenagers always have trusted friends with them when they are out. Talk to your teens and their friends about safety and the need to watch each other's backs.

6) Take the time to get to know the parents of your child's friends. I can not emphasize this point enough. It's important to know what type of home your child of any age is entering. A simple call of introduction to the other parent might suffice for older teens; for younger children, you must get to know not only the parents, but the older siblings of the friends as well.

8) When your older teens are out on the town alone or driving, make sure they have a cell phone. The age and maturity of the child will help you determine whether or not that phone should also have an internet connection. Make sure your drivers know that the GPS tracking system must remain on so you can know where they are in case of trouble.

9) Teach children of all ages that if they feel threatened or uncomfortable in a situation, they should leave or look for help. My mom used to say, "Becks, if you feel the hair standing up on the back of your neck or if something just doesn't seem right - it means it is time to go."

10) Above all else, make it a point to let your children know EVERY day how much you love them. And make meaningful conversations a regular part of your lives - if you do so, they will always know they can come to you in times of stress or trouble.

Of course, the list above is not exhaustive - the brevity of a column does not allow for that. So my biggest tip is to decide right now - this very day - that you are going to become your child's strongest advocate and most trusted friend. And let them know beyond any doubt that you will always stand up to protect them; and that you, unlike Donald Trump and other social liberals, will never bow to political correctness when it comes to their safety.