The Challenge: Hungry for Fellowship 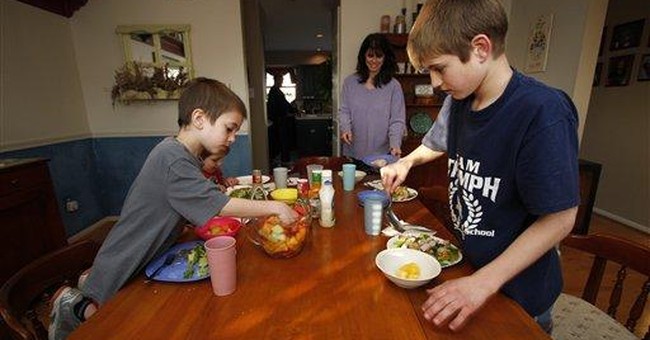 Editor’s note: This column was co-authored by Kristin Carey.

The “center” of a home—the place that sees the most traffic—tends to be wherever food is found, which makes the kitchen, or more specifically, the table, the most important spot in every home. It’s important for a simple reason: everyone needs to eat. But its significance reaches far beyond the filling of stomachs. The table has the potential to be the place where schedules line up, where work and entertainment get put aside in favor of the conversation that nourishes relationships.

It’s hard to overemphasize the importance of sharing meals together as a family—sitting down, away from distractions, as a group—as often as possible. There is just something about the simple, routine, and necessary act of eating that makes it the perfect medium for meaningful human interaction. And social science data backs up the importance of shared meal times: Studies show that children who have dinner with their families at least three times a week are twice as likely to report being happy; less likely to experiment with alcohol and drugs; and do better in school than their peers who don't have the benefit of family mealtime.

Yet, studies also report that most children say they rarely have meals with their parents, and when they do, the television is often on. Perhaps God designed our need for food to be a natural time where families and friends would come together and bond through the preparation, enjoyment and cleaning up of meals. How perfect that we can nourish our relationships and instill a sense of security in our children while nourishing our bodies.

C.S. Lewis wrote in Mere Christianity, “God never meant man to be a purely spiritual creature. That is why He uses material things like bread and wine to put the new life into us. We may think this rather crude and unspiritual. God does not: He invented eating. He likes matter.”

The Hope: Breaking Bread Together

Jesus gave new meaning to the familiar bread and wine that he served his disciples on the eve of his crucifixion. Paul, who shared in the Last Supper, wrote in a letter to the new church in Corinth:

“For I pass on to you what I received from the Lord himself. On the night when he was betrayed, the Lord Jesus took some bread and gave thanks to God for it. Then he broke it in pieces and said, ‘This is my body, which is given for you. Do this to remember me.’ In the same way, he took the cup of wine after supper, saying ‘This cup is the new covenant between God and his people—an agreement confirmed with my blood. Do this to remember me as often as you drink it.’ For every time you eat this bread and drink this cup, you are announcing the Lord’s death until he comes again.”

This act, which began the sacrament of communion, led into more than religious ritual. It transformed the relational patterns of all who became Christians after Jesus rose up out of his grave. Acts 2 describes the earliest days of the Christian church like this:

“All the believers devoted themselves to the apostles’ teaching, and to fellowship, and to sharing in meals (including the Lord’s Supper), and to prayer. A deep sense of awe came over them all, and the apostles performed many miraculous signs and wonders. And all the believers met together in one place and shared everything….They worshiped together at the Temple each day, met in homes for the Lord’s Supper, and shared their meals with great joy and generosity—all the while praising God and enjoying the goodwill of all the people. And each day the Lord added to their fellowship those who were being saved” (Acts 2:42-47).

Notice how much importance Paul gives to sharing meals. Communion takenon Sunday is an undeniably essential part of church fellowship, but we have the opportunity to commune together as family, as friends, and as brothers and sisters in Christ three times every day. We have to eat—why not do it together? Why not turn the simple, necessary act of eating into a kind of sacrament?

Part of the reason so many Christians pray before they eat is because our physical hunger serves as a built-in reminder of our much deeper and more important spiritual hunger. Hunger reminds us that we need God, and food brings us together to remember Him.

“I want you to stop running from thing to thing to thing, and to sit down at the table, to offer the people you love something humble and nourishing, like soup and bread, like a story, like a hand holding another hand while you pray… Most of the time, I eat like someone’s about to steal my plate, like I can’t be bothered to chew or taste or feel, but I’m coming to see that the table is about food, and it’s also about time. It’s about showing up in person, a whole and present person, instead of a fragmented, frantic person, phone in one hand and to-do list in the other. Put them down, both of them, twin symbols of the modern age, and pick up a knife and a fork. The table is where time stops. It’s where we look people in the eye, where we tell the truth about how hard it is, where we make space to listen to the whole story, not the textable sound bite.”

A table spread with food and surrounded by people who gather to fill their mouths and refresh their spirits is, quite literally, a glimpse of heaven. Start welcoming heaven into your home tonight by gathering around the dinner table, and feast on good food and good conversation. Your children hunger for it.