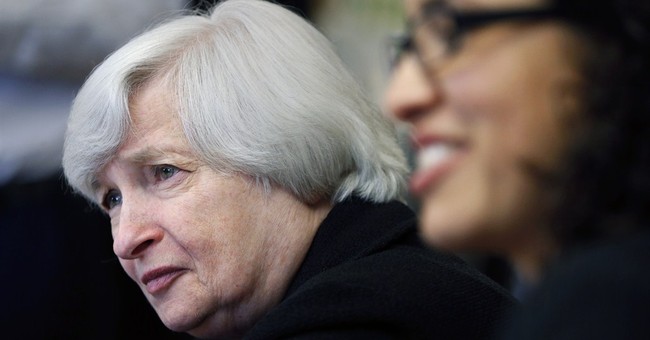 At CPAC, recently, an estimated 10,000 conservatives and libertarians, together with many presidential aspirants, gathered across the Potomac. They did so amidst massive hoopla and intense media fascination. We in the media are nothing if not suckers for hoopla.

History, however, typically emerges without hoopla. Janet Yellen, meeting with 21 members of the center right, in Washington, at the very same time, may actually have made some real history.

While this story was reported by the AP (as carried, among many publications, by the New York Times, ABC, Fox Business, and Salon.com
CARTOONS | Bob Gorrell
View Cartoon
), the Wall Street Journal, Bloomberg, CNN, the Washington Examiner, and the Daily Signal, among others, there is more to report.

On February 27th, at the Fed headquarters at the corner of 20th and Constitution, the Chair of the Federal Reserve Board of Governors, Dr. Janet Yellen, and Governor Lail Brainard, met with a delegation of 21 center right figures. The delegation included some of the most influential free market thought leaders from the monetary and financial policy arena. A dozen attendees made thoughtful statements. The rest, myself included, were present as observers.

The ground rules of the meeting prohibit any characterization of the statements of Fed officials by participants. It does not, however, violate the ground rules to report that Chair Yellen and Governor Brainard were keenly attentive, well focused on each speaker, and presented respectful and intelligent questions to ensure they fully understood the statements made.

The delegation was assembled and led by the Hon. Steve Lonegan, monetary policy director of American Principles in Action. It included four other representatives from APIA: its chairman, Sean Fieler; APIA director and board secretary Ellen Barrosse; Dr. Marc Miles, an APIA consultant; and myself, APIA’s senior economic advisor.

Lonegan’s, and the delegation’s, core theme: liberals do not have a monopoly on caring about middle and low-income wage earners. This theme represents an authentic, and welcome, shift in the right’s discourse. It represents a shift away from (although not inconsistent with) a utilitarian theme to a humanitarian one.

The right, with its signature championship of capitalism, has given an impression (assisted by a left-leaning academe and media) that it is committed to privileging creditors over debtors, capital over labor, and Ebenezer Scrooge over Bob Cratchit and Tiny Tim. Not so. Capitalism, properly constructed, is what causes workers to thrive. To recall President Kennedy’s immortal phrase: “a rising tide lifts all boats.”

A new, unified, message by the right, at the Fed, was unmuffled: a free market strongly benefits workers. This message to Yellen may prove a watershed shift by the right. Could prove historic.

While the Fed’s intentions are good, the current policies are leading to distortions that are hurting middle and low-income workers. This is not the Fed’s desired outcome. Our scholars will present evidence to that end and will be punctuated by representatives … who will give personal testimony. It is our desire to produce thoughtful and valuable research to Fed officials.

Prof. Domitrovic (himself a Forbes.com columnist and who here has set forth his remarks, well worth reading in full)) observed:

Over the forty some years since 1971, two sets of two decades mirror each other. The 1970s and the (now long) 2000s have proven eras of monetary discretion, and the 1980s and 1990s were those of classical policy, classical de facto if not de jure. Moreover, just as the 1970s and the 2000s are like to each other in being less classical in monetary orientation, so did the 1980s and 1990s jointly recall the decades of Bretton Woods: both of these eras were more classical in monetary orientation.

Economically, the effects were startling in their contrasts. In the 1980s and 1990s, growth was high, recessions rare (there was one from 1982 to 2000), entrepreneurialism common, and jobs abundant. In the 1970s and the 2000s (through today), recessions were either frequent or their recoveries slow and shallow, un- and under-employment sampled new high levels, and investment went into primary inputs ranging from oil to land (and gold) to an uncommon degree.

The ultimate forward guidance would be a clear rule for conducting monetary policy, well known and well understood by all. Even better, we should seek to build an orderly and ethical international monetary system. ... Any new system we might imagine could include the designation of a universally-accepted reserve asset or currency -- with existing national or regional monies linked through convertibility or sovereign financial instruments. Gold comes to mind as a logical anchor. As the ECB recently affirmed: "Gold remains an important element of global monetary reserves.’ As Alan Greenspan noted before the Council on Foreign Relations in October: ‘Gold is a currency. It is still by all evidences the premier currency where no fiat currency, including the dollar, can match it.’ ... [I]t was striking to hear former IMF managing director Jacques de Larosiere declare at a conference last February in Vienna that nothing has replaced the discipline of an anchor in international monetary relations since Bretton Woods. Inflation-targeting by central banks has resulted, according to Larosiere, in volatility, persistent imbalances, disorderly capital movements and currency misalignments.... The world's existing monetary setting is something much worse than a 'non-system,' Larosiere concluded. It amounts to an 'anti-system.'

John Allison spoke eloquently of how the Fed’s new regulatory rules functionally disable community bankers from making loans on the basis of good judgment about the character of borrowers and of the social fabric of their communities, a depth of judgment which had enabled safe lending and the creation of new businesses and abundant new, good, jobs.

Dr. Norbert Michel, drawing upon the Bank of England’s 2011 seminal Financial Stability Paper No. 13, observed that under the post-1971 fiduciary monetary regime annual GDP growth has been a full percentage point lower; annual average inflation has been materially higher; downturns in median countries have more than tripled; banking crises have moved from one per decade to 2.5 per year; and the number of currency crises has doubled.

Against a range of economic metrics, the world’s major economies have performed more poorly since the breakdown of Bretton Woods. … There is enough evidence for the Federal Reserve Board of Governors, at the very least, to passively support the bipartisan Centennial Monetary Commission. Such a Commission, which would include a [representative] appointed by the Fed Chair, would fully evaluate economic performance under alternative monetary regimes.

Dr. Miles requested his presentation be kept off the record by this columnist. That request hereby is honored.

Sean Fieler closed with a reiteration of Dr. Michel’s call for Fed support of a monetary commission as a way to legitimize the discourse and create a space for a national conversation. Fieler stated the desire to help foment a fruitful discussion. In that spirit, he informed the Fed of APIA’s scheduling its own Jackson Hole symposium, overlapping that of the Kansas City Fed, next August, and announced that this symposium would feature former Fed Chairman Alan Greenspan.

Fed Chair Janet Yellen and Governor Lail Brainard listened respectfully throughout the hour’s presentation. Dr. Yellen has set a new tone for the Fed, breaking many of its hermetic seals the better both to speaking and listen. Dr. Yellen, by extending the same courtesy to the right as she has to the left, is proving instrumental in elevating the national conversation about monetary policy.

It is too much to ask “even of officials of such admirable integrity, intellect, and heart as Janet Yellen (and Chair Yellen’s deeply admirable Vice Chair Stanley Fischer….)” as I previously have characterized the current Fed leadership, to do this unaided. Time for a national conversation. As Dr. Yellen made clear to Chairman Jeb Hensarling in her most recent testimony before the House Financial Services Committee the Fed desires independence, not autarchy.

Now it is time for a sympathetic Congress, one respectful of the high value of Fed independence, to engage. Time to take the national conversation to the next level by enacting a national monetary commission to evaluate empirically, in a nonpartisan fashion, what monetary policies have proven, in practice, most beneficial in the creation of a climate of equitable prosperity, job creation, and income mobility.