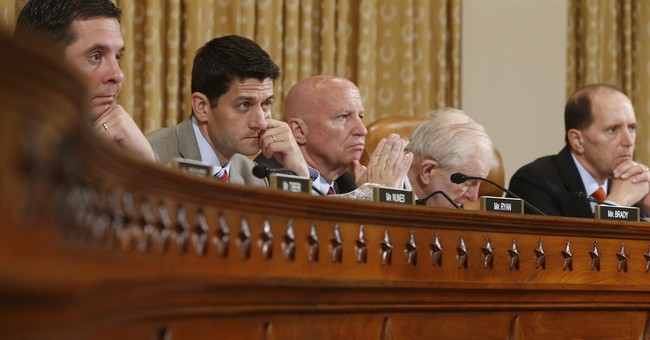 Most political eyes now are turned to whether the Republicans will take, or the Democrats hold, a Senate majority. Meanwhile what may be a comparably important election will be conducted, probably next month, mostly out of the public eye.

This is the race between Rep. Kevin Brady (R-Tx) and Rep Paul Ryan (R-Wi) for the chairmanship of the House Ways and Means Committee. Ways and Means is the most important tax-writing body in the world. Much may depend on which of them wins. That race has turned hot. It is drawing high profile reporting by the Washington Post and the Associated Press among many outlets.

A majority of votes cast by the 30 Members of the Republican Steering Committee will decide this race. The House Leadership — Speaker Boehner, Leader McCarthy, and Whip Scalise — certainly will have a profound influence on the outcome. In addition to the respect that Leadership has earned in the Conference and the Steering Committee the Speaker and the Leader have some extra votes to cast.

Why does this race matter?

Brady outranks Ryan in Ways and Means seniority. In ordinary course Brady would succeed the retiring chairman Rep. Dave Camp (R-Mi). Rep. Ryan threw a slightly sharp elbow in announcing last December his plan to pursue the committee chairmanship. He thus is committing an attempted leapfrogging of Brady, who he calls a friend.

When Kevin Brady publicly announced, long well known, that he would seek the chairmanship of Ways and Means it created quite a stir, especially among Inside-the-Beltway media. The Washington Post’s Post Politics summarized the effect of Brady’s announcement as “jolting what many expected to be a smooth ascension to the post by Rep. Paul Ryan (R-Wis.), the former vice presidential nominee and the House GOP’s architect of fiscal policy.”

Jolting? Putting aside Paul Ryan’s ambition there are three big reasons why the outcome of this election really matters. The first has to do with the two men’s respective vision. The second has to do with their respective tactical approach to a comprehensive tax reform whose outcome will touch all of us in major ways. The ultimate reason has to do with the fundamental issue of how Congress works, and should.

First, the vision. Kevin Brady methodically has made economic growth his signature issue. Ryan has made fiscal probity his cornerstone.

In his own way Brady quietly has picked up the mantle of the late, great Rep. Jack Kemp. Brady has made rectifying what he calls the “Growth Gap” his crusade. Brady confronts the growth gap nearly as insistently as Cato the Elder called for the destruction of Carthage.

Ryan uses the rhetoric of prosperity and not infrequently alludes to economic growth. That said, his core message is founded in fiscal probity. Ryan’s call for growth presents as a welcome leitmotif rather than as his main theme.

Not that there’s anything wrong with fiscal probity. Both Representatives embrace it.

Brady, upping the ante of Ryan’s “Roadmap to Prosperity,” has offered something he calls the Maximizing America’s Prosperity (MAP to growth), putting up guardrails. These reportedly would in due course cut spending by more than Ryan’s Roadmap … and in a way designed to be more growth than green-eyeshade oriented.

And take the MAP in its larger context. Brady, as JEC Chairman, also put forward two significant pieces of monetary reform growth-oriented legislation. These are the Centennial Monetary Commission and the Sound Dollar Act. Ryan, in his truly excellent book The Way Forward, effusively praises the Sound Dollar Act. (Incongruously, though, he does not appear listed among its 52 co-sponsors.)

Because of the consistency of Brady’s commitment to economic growth this columnist once dubbed him “The 6 Trillion Dollar Man.” This sobriquet was earned by Brady’s cognizance of a CBO estimate that every one-tenth of one percent GDP growth adds $314 billion in federal revenue over ten years. 2% extra annual GDP growth thus would bring over $6 trillion, over a decade, into the federal coffers, balancing the budget … without raising taxes.

Even 3.5% GDP growth would obviate, or at least soften, the need for many politically risky prudential restraints to the growth of social insurance well-meaningly propounded by Ryan. There are, after all, two ways of eliminating the deficit (and securing the solvency of Social Security and Medicare): primarily through growth or primarily through spending restraints and, where indicated, cuts.

Neither is wrong. Both work. Both Representatives embrace spending restraint.

It is a matter of emphasis. Brady tilts toward growing the real economy. Ryan tilts toward government spending cuts. Ryan claims Kemp, his long-ago mentor, as his inspiration. Yet many of his policy formulations seem (to this old-time supply side hand) more in accord with the spirit of Kemp’s old colleague Rep. David Stockman, who went on to direct OMB under Reagan.

There do not appear fundamental substantive differences on tax reform between Brady and Ryan. That said, emphasis matters.

Iconic proto-supply sider Peter Drucker set forth a governing axiom in his breakthrough book The Effective Executive: “In every area of effectiveness within an organization, one feeds the opportunities and starves the problem.” It would appear that Brady is more intent on feeding the opportunities, Ryan more committed to starving the problem. There are political implications to this.

Second, the tactics. Both Brady, at his official website, and Ryan, as set forth in The Way Forward, share similar guiding principles on tax reform, including simplification and lowering marginal rates. The two men’s differences present as more dispositional and tactical than substantive. Disposition and tactics matter.

Ryan is bolder. Yet sometimes a valiant direct assault can lead to catastrophe, as the Light Brigade discovered during the Crimean War. “It is magnificent,” said Marshal Bosquet, observing that suicidal charge, “but it is not war. It is madness.” If the Republican Leadership really wishes, as does this columnist, to achieve tax reform it would do well to heed Aesop: “slow and steady wins the race.” The tortoise beat the hare.

Ryan has proven himself tenacious in pushing what he likes to call “hard” (a euphemism for unpopular) positions. In The Way Forward,recording election night 2008, Ryan observed,

What worried me most was that the Republican Party wasn’t up to the task (of revitalizing our nation’s economy and cutting the size of government). We’d become lazy and tired. We were complicit in creating many of the problems we now faced. We’d become just another party of big spending and big government. I knew if we were going to save the country, first we would have to change the Republican Party from within. For starters, we needed to step up and really engage in the battle of ideas. We had to be bold, get specific, and accept the risks that entailed.

Ryan’s observations therein are consistent with an observation about him by a colleague reported in a 2011 story in The New York Times“’Ryan isn’t touching the third rail,” Mr. Cole (R-Ok) said, employing the expression used to suggest that messing with Social Security and Medicare can be politically fatal. ‘He is wrapping both hands around it.’”

Derring-do, however thrilling, might not be the optimal way to get tax reform done. Brady is much less of a policy daredevil than Ryan. Brady by disposition is more likely to adopt a more methodical approach. He shows some aversion to bringing down political heat on his party with perhaps unnecessarily “hard” decisions. Slow and steady wins the race.

Meanwhile Brady, unlike Ryan, has committed to serving a full six years as Ways and Means chairman. This matters. Six years would provide a more ample window for Congress to undertake the Herculean task of cleaning out the Augean stables of the federal tax code … and to get it enacted.

The tax code almost certainly cannot be reformed within Ryan’s two year “conditional commitment” to serve. Among other factors one simply cannot, as The Way Forward makes painfully clear, rely on the good faith of, and a signature by, President Obama.

Beyond the vision and the tactics, the matter of how Congress really works, and should, may prove the deciding factor. Ryan has adopted an ambivalent position.

He simultaneously ran for Vice President and re-election to the Congress in 2012, keeping both options open. Last August he told Larry King that he will “make up my mind with my family in 2015” as to a 2016 presidential run. His posture now implies he, once again, wishes to have it both ways. He should if he can. But can he?

Ryan explicitly has ruled out an ambition for a House leadership position, telling the Washington Post “I’m just not looking to be that guy. If I wanted to be in elected leadership, I would have run for it years ago.” Nevertheless, The Way Forward makes clear that Ryan has thought through, and laid out, positions on many issues.

Many, although not all, are well outside the jurisdiction of the House Ways and Means Committee. He presents a veritable presidential platform on entitlement and health-care reform, economic growth, tax reform, ending cronyism and corporate welfare, regulatory reform, immigration reform, sound monetary policy, national defense and foreign policy. Having ruled out a House leadership position this speaks of an ambition for the White House.

Even were Ryan, belatedly, to rule out a 2016 presidential run Mitt Romney may run (as appears increasingly likely). If Romney secures the GOP nomination Romney-Ryan 2.0 would be almost impossible to rule out. And in the event a different Republican contender is elected it is difficult not to imagine Ryan picked by the next Republican president as a cabinet member.

Newt Gingrich, after all, has called Ryan, as reported by the Washington Post, “probably the most talented single person in the House.” Ryan would be excellent at OMB. He is well qualified for Treasury and other posts. It is difficult to imagine him turning down such an office. It thus would seem impossible for Ryan credibly to rule out his departure two years hence, whether or not he himself runs for president.

Ryan has not ruled out a run for the White House, a place on the ticket, or cabinet service. Nor should he. Yet … a latent potential conflict between his own political interests and those of the House Republican Conference lurks just under the surface.

Kevin Brady and Paul Ryan are formidable leaders, both credits to their party and to the Republic. The House Ways and Means Committee is a pivotal institution. Hence, the stakes are high.

Most political eyes will be turned, next month, on the U.S. Senate election. Meanwhile, the prospects for thoroughgoing reform of the US tax code, and, thus, the fortunes of the GOP, and of America itself, may hang on the outcome of the Ways and Means chairmanship election. The stakes, in fact, could not be higher.