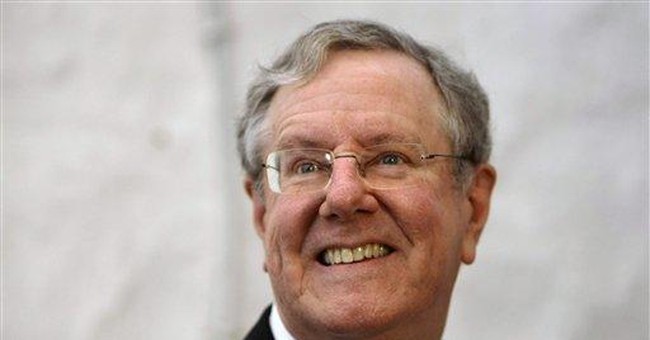 Steve Forbes, chairman and editor-in-chief of Forbes Media, and Elizabeth Ames have written their best book yet. It is entitled Money: How the Destruction of the Dollar Threatens the Global Economy—and What We Can Do About It. Money is, by far, the most important book on economic policy published this year. (Full disclosure, Forbes and Ames reference and acknowledge this writer’s work, including his collaboration with Forbes.com contributor Charles Kadlec, in this work.)

Significantly, one of the prime architects of the prosperity-inducing Reaganomics, Dr. Arther B. Laffer, has this to say about Forbes and Ames’s book: “A compelling and well-informed argument for a 21st century gold standard and a sound dollar, which will be the foundation for a new era of global prosperity.” It is very good to have the brilliant Laffer again speaking up for gold.

Laffer did seminal work, with Kadlec, on the gold standard in 1981. The record is contained in the Laffer Center’s archives: “Restoration of dollar/gold convertibility is the final and necessary link in the President’s program for an American Renaissance.”

Steve Forbes was featured prominently at an October 2011 Heritage Foundation Conference on a Stable Dollar: Why We Need It and How to Achieve it, also featuring Lewis E. Lehrman, the undisputed leading advocate of the classical gold standard (with whose Lehrman Institute’s web publication this writer has a professional association). Lehrman appropriately is given pride of place in Money’s acknowledgements.

At that Heritage Foundation Conference Forbes made a wry and witty observation, reprised in this book: “conversations about monetary policy … (are) a surefire way to discourage unwanted conversations on airplanes.” Forbes and Ames have found a way to make the conversation wanted, and even compelling. Forbes and Ames bring an abundant level of sanity, lucidity, and interest to what too often is considered as an arcane subject.

Good money is crucial to creating a climate of equitable prosperity. Forbes and Ames’s putting the case in terms accessible to regular readers is invaluable. Steve Forbes is a supply side icon. Money — this magnum opus on the gold standard, one of Forbes’s signature issues — deserves to become a classic.

Money, far from being the root of all evil, presents (when, as here, golden) as delightfully virtuous. Its preface probes into just how our elites went so wrong in the mismanagement of our fundamental economic unit of account. Their analysis was anticipated by that of Frederick Hayek in The Pretense of Knowledge, his Nobel Prize acceptance speech:

It seems to me that this failure of the economists to guide policy more successfully is closely connected with their propensity to imitate as closely as possible the procedures of the brilliantly successful physical sciences – an attempt which in our field may lead to outright error. It is an approach which has come to be described as the “scientistic” attitude – an attitude which, as I defined it some thirty years ago, “is decidedly unscientific in the true sense of the word, since it involves a mechanical and uncritical application of habits of thought to fields different from those in which they have been formed.” I want today to begin by explaining how some of the gravest errors of recent economic policy are a direct consequence of this scientistic error.

In the spirit of Steve’s late, great, father Malcolm S. Forbes, each chapter of this book is encapsulated by an aphoristic “Nugget.” If you have any doubts as to whether acquiring it is worthy of your (at discount) $20.72 (just a nickle more than an iconic gold standard definition of the dollar of $20.67/oz), consider them:

How We Got Here: “An unstable currency means an unstable economy and less prosperity.”

What Is Money: “Money measures wealth, but does not create it.”

Money and Trade: “The only real deficit is not enough trade.”

Money Versus Wealth: “To paraphrase Ron Paul: if printing money created wealth, there would be no poverty left on earth.”

The Gold Standard: “Gold remains the monetary Polaris: Every alternative has failed.”

Surviving in the Meantime: “When it comes to investing, emotions are your enemy.”

Looking Ahead: “Instability and insufficient growth are not the new normal. A new gold standard will come.”

This book contains too many important, and engaging, contributions for a review to do full justice to it.

As a sampler, Chapter 1 presents an empirical inventory of woes encountered under, and produced by, the Federal Reserve Note standard: the housing bubble; high food and fuel prices; declining mobility, greater inequality, the destruction of personal wealth; increased volatility and currency crises; weak recovery; larger government with higher debt among those featured.

Chapter 6, The Gold Standard, How to Rescue the Twenty-First Century Global Economy, goes on to offer the proven solution.

Freeing the dollar from gold was supposed to make the United States stronger. Instead it has made the country weaker. It has eroded America’s wealth and has jeopardized its leadership position as the world’s strongest economy.

Something has to be done.

Lately there has been a push for another option that, until very recently, few people in policy circles would seriously entertain: a return to stable money through the use of a gold standard.

Rep. Kevin Brady, chairman of the Congressional Joint Economic Committee, and Sen. John Cornyn are pushing a bill to create a bipartisan commission to conduct a thorough examination of monetary policy. Brady’s bill is attracting sponsors in both the House and Senate.

It doesn’t have to be a big shelf. About twelve good books, recently written, would be enough.

Lewis Lehrman has just finished his most recent book on the topic, which was available in short-format form last year. That makes two books on our shelf. Great.

This columnist considers Lewis E. Lehrman’s The True Gold Standard (to which Nathan Lewis alludes) as, in its original and then expanded form, the most important economic policy book of 2011 and 2012. Monetary savant James Grant said of this work “America has long needed a modern Alexander Hamilton. In Lewis E. Lehrman, she has finally found him.” This columnist considers Lehrman’s 2013 Money, Gold, and History, from which Forbes and Ames draw an epigram for their second chapter, the most important book for economic policy published in 2013. (Nathan Lewis, who Forbes and Ames call out for special praise, himself certainly draws honors for his Gold, the Monetary Polaris.John Tamny, also especially praised in Money‘s acknowledgements, called that work “Easily the most important book of 2013….”)

Money: How the Destruction of the Dollar Threatens the Global Economy—and What We Can Do About It is the most important book on economic policy of 2014. It provides an exposé of the true nature of the disorder plaguing, and impoverishing, America and the world: bad money. It then decisively makes the case why gold is “the foundation for a new era of global prosperity.”